War on the Environment!

Great headline in the HuffPo the other day, Republicans declare war on EPA or something like that. Linked you to this article on The Hill.

I immediately had the vision of Sergeant Mitch leading the charge against the earth's environment and its godless backers.

I wrote about the certainty of this a few days ago but must confess I wish it wasn't happening. Frankly it makes me sick.

"Incoming Senate Majority Leader Mitch McConnell (R-Ky.) identified his top priority come January as “to try to do whatever I can to get the EPA reined in.”


He said he feels a “deep responsibility” to stop the EPA from regulating carbon dioxide emissions from coal-fired power plants, as it proposed to do in January for newly built generators and in June for existing ones. But those are far from the only rules the GOP wants to target. Republican lawmakers are planning an all-out assault on Obama’s environmental agenda, including rules on mercury and other air toxics from power plants, limits on ground-level ozone that causes smog, mountaintop mining restrictions and the EPA’s attempt to redefine its jurisdiction over streams and ponds.The Interior Department is also in the crosshairs, with rules due to come soon on hydraulic fracturing on public land and protecting streams from mining waste.Helping McConnell in his fight against the EPA will be Sen. Jim Inhofe (R-Okla.), who said on election night that he would become chairman of the Environment and Public Works Committee after having led it from 2003 to 2007. Inhofe is an established enemy of Obama’s EPA and skeptic of the scientific consensus on human-caused climate change, having written a book two years ago titled “The Greatest Hoax: How the Global Warming Conspiracy Threatens Your Future.” He has compared the EPA to Nazi Germany’s Gestapo and pushed to roll back water and air pollution rules, ozone limits and funding for contamination cleanup."

I guess that these politicians and the people who elected them, will get to own any environmental devastation that comes down the pike, not that they really care. What I'm thinking is that if they think that polluting rivers and knocking down mountains to mine coal, and fracking, is so damn cool, that they should encourage a whole new industry, pollution tourism. Run busses out to the various sources of pollution and picnic with your families amongst the fumes and spills. Ought to add to your electoral margin.

Revel in the moloch laden landscape that you helped to create and know that you are doing god's work! Pollution is the lords way of telling us that America is running on all of its fossil fuel belching cylinders.

More on the story of the GOP war on the EPA at the New York Times. 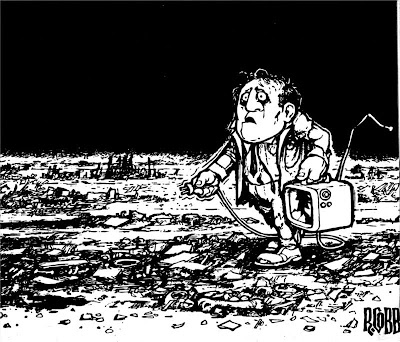