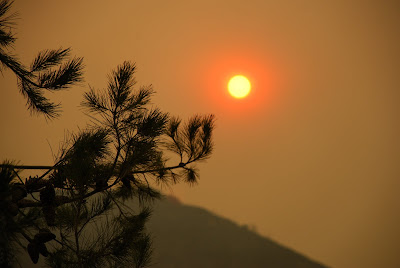 Bryce Walker raked the last errant components back into the center of the roaring fire. The release of the chemicals in the glowing circuit boards and diodes left a foul smell in the air and an acrid taste that coated the upper palette of his mouth.

He knew that it was probably too late in the game but he had felt a strong urge to take his life back. And protect the health of his family. He heard a large pop and turned and saw the expensive plasma television set's screen implode and turn into an almost unrecognizable blob. He could not restrain the huge smile that crossed his lips. As he kicked a stray cell phone back into the toxic coals he pondered his feelings of release from the technological straightjacket that had taken over his life.

When Bryce was a child in the 1950's, television was a welcome invention that brought the family together for wondrous viewing of such shows as Arthur Godfrey and Uncle Milty. Every sunday night the tribe would grab their space age tv trays and retire to the den to watch the Wonderful World of Disney on the oversized Curtis Mathes. In black and white of course. How did the great invention fall to such depths and become a disseminator of the worst reflections of human nature?

And when was the last time he had seen kids throwing a ball in the street? Yes the wii games were a short fad in the "ought" decade that encouraged physical activity, but the obese younger generation had quickly tired of such vigorous pursuits and soon went back to blowing up monsters on their video consoles.

No one believed what the cell phones would do to your brains until the first videos appeared on the net that clearly showed that they could easily pop popcorn. More and more people were entering emergency rooms and doctors offices with intense migraines that turned out to be early indications of brain cancer.

Walker used the rake handle to stir his misbegotten electrical stew. He impaled his expensive lap top through the glowing fruit on the lid and tossed it into the hotter regions of the fire. He had 256,936 Facebook friends at the moment and their every stupid thought and bodily function was now transmitted to him and the world at large in real time. In clipped misspelled cadence not to exceed 144 spaces or characters.

He had once been a student of history and had read the letters of Adams, Jefferson and even the general population during the turn of the nineteenth century and knew how far the human race had fallen. The eloquence and vocabulary of the average american, not to mention penmanship, had been truly astounding during those times. Now, communication occurred too quickly with all of the new devices and we had reverted to atavistic, neanderthal grunts and glyphs.

He missed the pleasure of laying down on the couch with a good book. The tree huggers had led the charge against books, all that wasted pulp you know, and convinced the population that they were better off with those bulky electronic "booque" gadgets. He hated them. You couldn't dog ear a favorite page, or god forbid pick your teeth with one. If an author fell out of favor with the folks in Washington, the title was simply deleted, and for all intents and purposes, never existed.

He disliked books on tape as well. Yeah, they could kill idle time on long trips or in traffic, but the voices never quite matched the priceless one's he heard in his head when he was reading. The inflection of the actor's background and history was indelibly scribed in his or her voice and mucked up the intended character that the author had originally created.

A yellow pool of toxic silicon sludge ran in rivulets toward his feet. He pirouetted around the gunk like a dancer. His blackberry, which he now was offering to the gods as a techno sacrifice, had a red button which flashed when he got an email. He found that he was constantly monitoring that light from the time he awoke to the hours of sleep. The invisible universe was cutting into his time on the physical plane. When was the last time he had walked over to say hello to a neighbor? Or said hello to a stranger? And that infernal website he had created...

The government had assured every american that they really didn't care to pry into their private business but the data mining and deep packet inspection technology had turned out to be just too damn good and now there was a neat little archetype file in cyberspace at NSA that laid out the web browsing history, political and religious affiliation, close personal associates, sexual proclivities and real time global positioning of every one of its citizens.

Walker worried about his children. The most aberrant and risky sexual activity was now being played out by youth as normal human interaction. Thanks to the new technology, there was no possible way to guard them from the filth that constantly coursed through the cyberworld.

Bryce looked across his valley and saw four or five similar fires burning. He had a strange feeling of optimism. Maybe we still had a little time to live. Free. For a time.