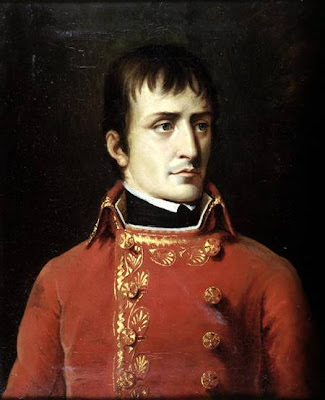 Interesting news on the genetics front. Scientists have tested Napoleon Bonaparte's DNA. He is an E1b1b1c1* (m-34) just like yours truly. I am in the D-1 cluster, Napoleon the closely related D-2.

Here is the original research paper on the discovery from the Journal of Molecular Biology Research. A jewish origin appears to be a distinct possibility, and likely. It should be noted that his allele value of 7 at 454 is four off of the modal.

Another article at Dienekes. And an involved discussion at the Double Helix website, which you may not be able to access.

Napoleon joins an interesting cast of despots from the E1b1b haplogroup which includes Hitler. Coppola. Michael Dell. Einstein, purportedly. Me.

I love a good quote. My all time champs are Groucho and Hemingway but I started reading some of Napoleon's the other day and was blown away by his intellect and wisdom. Amazingly bright and I am not saying that because he's a relative.

And so I serve you up a few:

*
A throne is only a bench covered with velvet.
*
You must not fight too often with one enemy, or you will teach him all your art of war.
*
The people to fear are not those who disagree with you, but those who disagree with you and are too cowardly to let you know.
*
The surest way to remain poor is to be an honest man.
*
There is one kind of robber whom the law does not strike at, and who steals what is most precious to men: time.
*
What is history but a fable agreed upon?
*
When small men attempt great enterprises, they always end by reducing them to the level of their mediocrity.
*
Four hostile newspapers are more to be feared than a thousand bayonets.
*

I can no longer obey; I have tasted command, and I cannot give it up.

*
I love power. But it is as an artist that I love it. I love it as a musician loves his violin, to draw out its sounds and chords and harmonies.
*
If you wish to be a success in the world, promise everything, deliver nothing.
*
If you want a thing done well, do it yourself.
Posted by Blue Heron at 2:01 PM

NB is also credited with the invention of canning food in order to feed his armies..he held a contest....

Napoleon Bonaparte faced many problems in his goal to dominate Europe, one of which was feeding a large and sprawling army, even when marching across areas that had been stripped of food. Even when food could be found, it would often spoil before it could be brought to the troops that needed it. So Napoleon offered a contest, with a prize of 12,000 francs, to the person who could come up with the most innovative new method of storing food.

The winner was Nicolas François Appert, who submitted a method of boiling and sealing food in glass bottles in 1809. The technique caught on quickly, and tin cans were substituted for glass a few years later. It wasn't until 50 years later, when Louis Pasteur discovered that heating kills microbes, that they understood why the heating process worked so well.