I am studying a lot of chess games at night. It has been decades since I have personally played but I enjoy following the matches of the greats. The best chess commentator around is a young Croatian man on Youtube whose channel is called Agadmator. He can really break down a game. His real name is Antonio Radić.

In any case, when I was young I idolized Bobby Fischer, remember devouring every move and every word of Shelby Lyman's expert commentary during the Spassky - Fischer World Championship in 1972. Fischer was extraordinarily strong as was Garry Kasparov later on and now Magnus Carlson today.

But I think the chess master who played the most beautiful and creative chess ever has to be Mikhail Tal (1936-1992). Known for his audacious sacrifices and tremendous calculation, Tal was a superhuman force in chess until the end of his life.

A jew from Riga, Latvia, Tal was the eighth World Champion of chess. Obviously a genius, he started reading at three and had entered university by the age of fifteen. He was a brilliant attacker and also a gifted writer.

Unfortunately he also suffered from very bad health, specifically kidney problems, losing a kidney in 1969. A fellow scorpio, he was a gifted piano player. The man they called the "Magician from Riga" had a rating of 2705 at his peak and a lifetime plus score against Fischer. 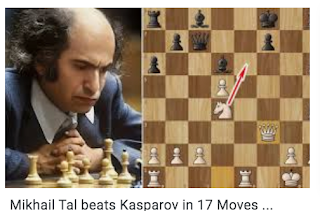 Tal liked to do the impossible and unexpected on the chess board, to seize the initiative. This made it very hard for other players to prepare and play with him. His game was fluid, wild and lyrical, he played like a mad poet.

I found this section recounted in Tal's autobiography:

Journalist: It might be inconvenient to interrupt our profound discussion and change the subject slightly, but I would like to know whether extraneous, abstract thoughts ever enter your head while playing a game?

Tal: Yes. For example, I will never forget my game with GM Vasiukov on a USSR Championship.We reached a very complicated position where I was intending to sacrifice a knight. The sacrifice was not obvious; there was a large number of possible variations; but when I began to study hard and work through them, I found to my horror that nothing would come of it. Ideas piled up one after another. I would transport a subtle reply by my opponent, which worked in one case, to another situation where it would naturally prove to be quite useless. As a result my head became filled with a completely chaotic pile of all sorts of moves, and the infamous "tree of variations", from which the chess trainers recommend that you cut off the small branches, in this case spread with unbelievable rapidity. And then suddenly, for some reason, I remembered the classic couplet by Korney Ivanović Chukovsky: "Oh, what a difficult job it was. To drag out of the marsh the hippopotamus".
I do not know from what associations the hippopotamus got into the chess board, but although the spectators were convinced that I was continuing to study the position, I, despite my humanitarian education, was trying at this time to work out: just how WOULD you drag a hippopotamus out of the marsh? I remember how jacks figured in my thoughts, as well as levers, helicopters, and even a rope ladder. After a lengthy consideration I admitted defeat as an engineer, and thought spitefully to myself: "Well, just let it drown!" And suddenly the hippopotamus disappeared. Went right off the chessboard just as he had come on ... of his own accord! And straightaway the position did not appear to be so complicated. Now I somehow realized that it was not possible to calculate all the variations, and that the knight sacrifice was, by its very nature, purely intuitive. And since it promised an interesting game, I could not refrain from making it.
And the following day, it was with pleasure that I read in the paper how Mikhail Tal, after carefully thinking over the position for 40 minutes, made an accurately calculated piece sacrifice.

l love Agadmator! "hello everyone" and "captures captures", right. He is very good at explaining the classic games he features. I actually find his videos to be comforting as he brings some happiness and joy to the world of high level chess analytics. I bet it would be fun to hang out with him. Did you know he is into photography? He used to support himself doing wedding videography, maybe he still does. I play quite a bit of chess, learned when I was 6 yrs old. Do you ever play stockfish? I just won my first "no take back" stockfish level 4 game ever this month! I usually just stick to level 3 as I like to win sometimes.

Good to hear from you, BV. I started playing about the time you did. In the seventies belonged to the North County Chess Club but haven't played seriously in a long time. Might check out stockfish one of these days. all the best,

I bet you would like Ben Finegold. Super strong player and great sense of humor. Lots of him on youtube. The Great Carlini is very good and super entertaining. He is a great wise cracker and trash talker, genuinely funny. Bobby Fischer was one of my heroes. Its just a shame the way he ended up. Stockfish is awesome. I use it all the time to train myself and expand my opening repertoire.

on a more serious note, I wish you much good fortune regarding your recent health issues. If there is anything that I can do to help you please let me know. You know I have always thought of you as a strong and brave and from reading your recent posts I dont think any differently. Fight like hell!!!

I've watched Carlini but too much slapstick for me. I like Eric Rosen. He beat Carlson in a blitz game.

Good call on Rosen. He is very very good but also understandable. He is seems like a really nice guy and also humble. Empathy and humility are just not common personality features among highly rated chess warriors.