Karma's a bitch or should I say a Mitch? 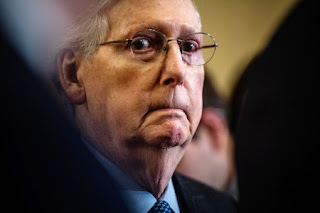 Not to get too political but here goes: Mitch McConnell has criticized House Democrats for refusing to provide their Republican colleagues with equal subpoena power and for not permitting Trump's counsel to take part in inquiry-related hearings, present evidence or cross-examine witnesses.

The White House wants all these things. Dems counter that the House impeachment inquiry needs to take place behind closed doors so that witnesses can't custom tailor their testimony and concoct a cover story. The House, as has been repeated over and over ad nauseam, takes testimony like a Grand Jury, impeachment is actually tried in the Senate.


“So, for all the public hyperventilating over institutional norms that we’ve heard from House Democrats in recent years, it appears they have no intention of letting norms, precedents, or basic due process stand in their way as they seek to cancel out a presidency," McConnell said in the Senate.

The hypocrite and hyper partisan Ken Starr, Special Counsel during the Clinton impeachment, calls out the dems for exercising "raw power." Which is sort of funny, because the GOP, from Merrick Garland to the obstruction of President Obama, has been nothing if not a party that loves to exert raw power. Starr goes so far as to call their efforts unconstitutional. Which is balderdash. Maybe not customary not to have a formal vote, but not unconstitutional. The dems have obviously learned their lessons well from the GOP. Don't give them an inch. The president will have plenty of opportunity to defend himself in the Senate.

I started looking in to the idea of subpoena rights of the minority party and was not too surprised to find that they once did have them, that is until the Republicans changed the rules in 2015 and outlawed the process. More about that here.


In a letter shared with POLITICO, the Democrats slams the GOP conference for changing rules on a number of House committees to make it easier for Republicans to subpoena witnesses without consultation or approval from minority lawmakers - an effort that came as Republicans are preparing aggressive oversight efforts for President Barack Obama’s final two years in office.

Tough luck. As you sow, so shall ye reap.

“Mitch” says it all!