Wait until the big girl sings

"Hey Mister, did you know that your van just exploded?"

The words of the porter rang painfully in my ear. The Palm Springs Fall Modernism show was gearing up to be a disaster of epic proportions, and I wasn't even yet in the starting gate. For the second time in three years, my van decided to fail in Palm Springs. This time my back hatch wouldn't stay up, for some reason it was automatically closing, with a lot of force and speed, so I couldn't even unload my merchandise.

I decided to try to prop it up with a stick but immediately smelled something electrical in nature and considered the fact that I might in fact be burning out a major motor or electrical system. I pulled some things out of the side door and brought them inside and when I returned to the vehicle I was alerted to the fact that the van had produced a rather loud bang in my brief absence.

"Shit," I thought. "There goes two thousand dollars I don't have." I drove over to Crystal Chrysler in Cathedral City. They tried and failed to help me when the front door went haywire two years ago. Or was it the side door? The doors on the Caravan and Town and Country are definitely the model's Achille's heel. The passenger side slider has been manual for two or three years, wasn't worth eight hundred bucks to me to get the door a new sensor. Anyway, maybe they could pull a fuse and convert the rear hatch to full manual so that I could do my show?

Really nice guy in service, Danny Ramos, said my hydraulic struts had given out, that was the explosive sound when they blew. He took me inside to see Sal, I bought a new set for about one hundred and fifty bucks and Danny installed them for me on the spot with his own tools for free. Wonderful guy, much appreciated. Tragedy narrowly averted. Could have been a true nightmare. 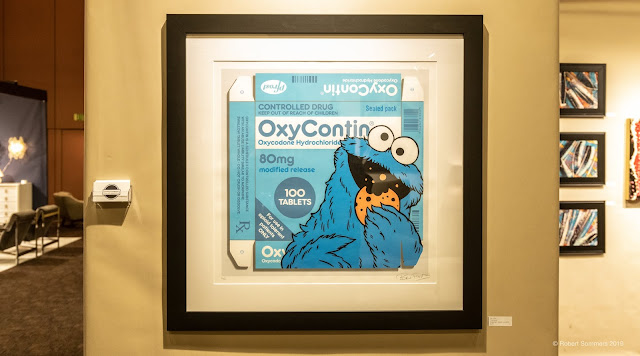 I got all my stuff in and started setting up. This fall show is the junior member of the Palm Spring Modernism events, the February show has a lot more dealers and energy, many more people in town.

Still, the promoter, Rosemary Krieger, and her staff are so good to me that I am going to support them at every opportunity that I can. The show was well attended and very nice in its own way. 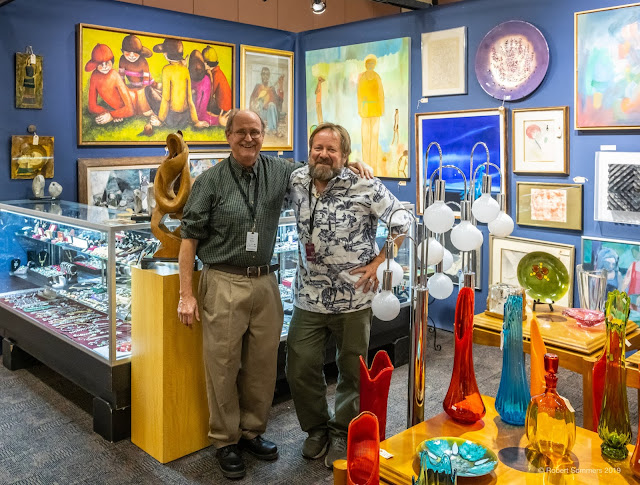 Bill Warmboe from Burlingame split the booth with me, his first time exhibiting there. Here he is with our great friend Rick Petteford. Both of these guys are extremely close brothers of mine. Bill sells jewelry, pottery, glass and paintings, Rick was a studio potter himself for decades.

I always feel like a fish slightly out of water at Modernism. I sell curated paintings with what I consider historical relevance, today the buyers are more visceral and unconcerned with pedigree, corvids looking for bright, shiny objects. Purely decorative now. I frankly abhor a portion of the material, reminds me of a seventies bad acid trip but it drives the market and one must conform I suppose or be swept away in the torrent of history. I admit I still struggle. Hard to sell something you hate or can barely tolerate anyway.

Some dealers do a beautiful job. 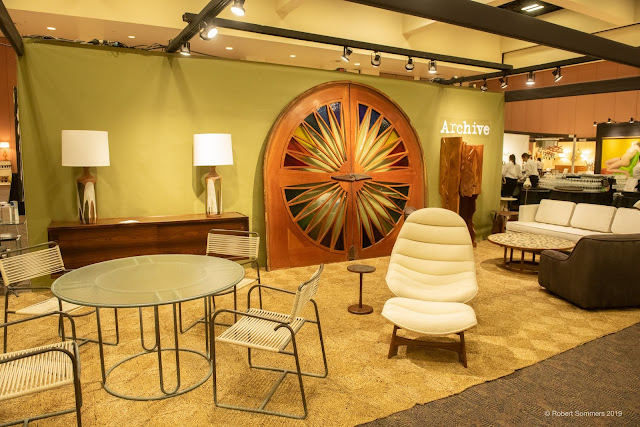 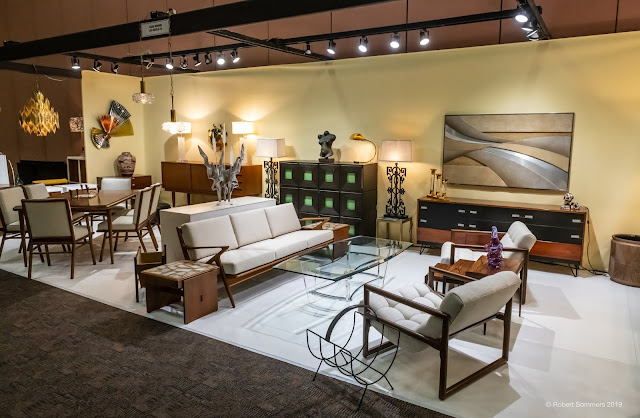 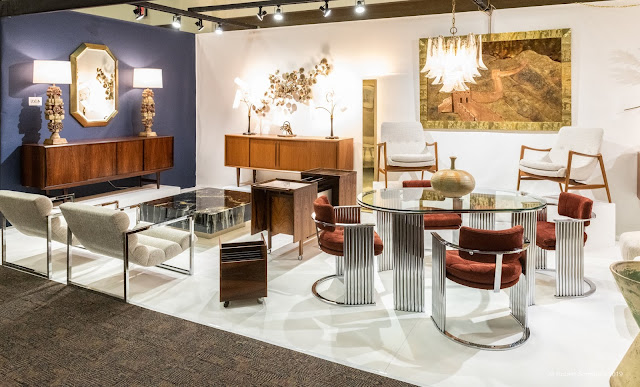 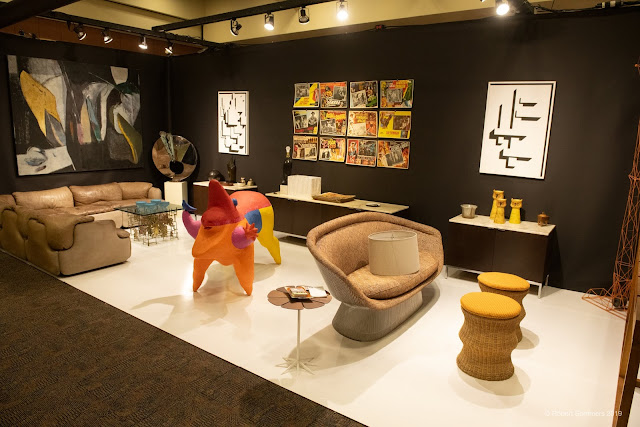 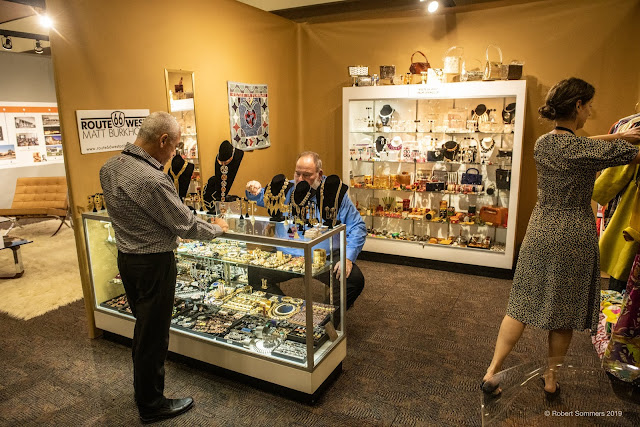 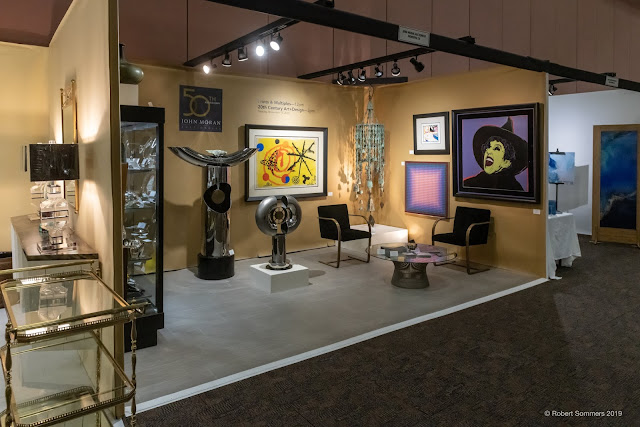 Rick evidently puts his shoes on one at a time, just like I do. 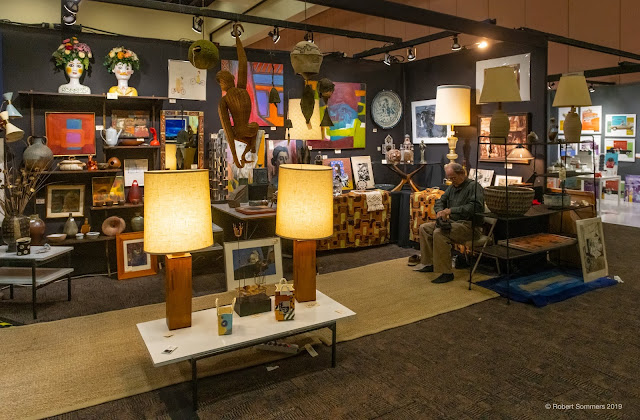 There were wonderful great new dealers at the show. Carolyn Flynn and Jim Hellemn. This couple next door were international scuba divers and selling lovely undersea photographs of his really excellent work.

I am going to take Jim Hellemn out and shoot birds one day, loan him some equipment. They want me to get back in the water with them. Tempting, scuba was one of the great joys of my prior life. 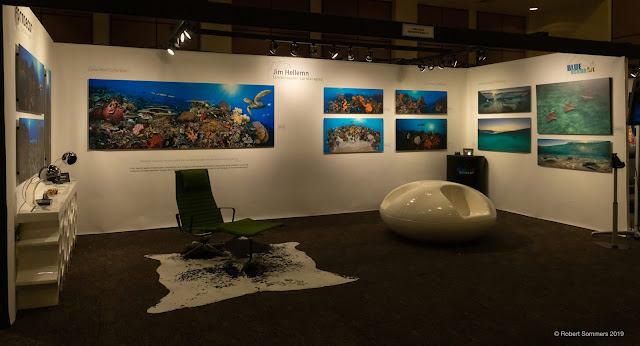 The other great new couple I met were Perrin Lam and of Disruptmodern, she is the creative director. He is an artist that specializes in beautiful drawings and prints and jewelry in the secessionist and suprematist style. I bought a lovely necklace for Leslie. Here is Perrin showing another of their creations. Sweet couple, hope to see them again one day. 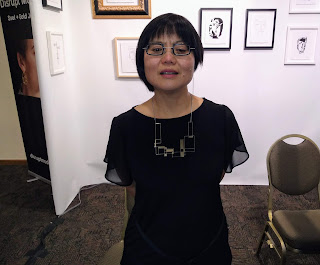 I sold one small painting for peanuts the first night. Nothing on Saturday. But I stayed remarkably calm and even. I have a surgery tomorrow, can't afford to be in an emotional tailspin. I got food poisoning Saturday night, at a neighborhood Italian joint. The chicken parmigiana smelled slightly rancid and I guess it was. For the sake of probity and good taste, I will spare you the sordid graphic details. Kat inquired about garlic and our server said that they only had alowee, it took me a second to realize that he meant aoli. Decided not to correct him as he was overlarge and looked not too receptive to constructive criticism and I am not exactly in the peak of physical condition at present.

I was staying at the Marquis Resort, a timeshare right next to Shermans. I got a great deal at Hotels.com. Enormous room with kitchen and fireplace, two baths. Secured basement parking. Unbelievable deal at under eighty bucks. Being next to a great deli, I ate there a lot. Finally finished the antibiotics, so I had their latkes and brisket special, the cherry cheesecake, blintzes, matzoh ball soup, corned beef and tongue sandwich and and lox and eggs. Honestly, I ate like a jew.

Sunday was more of the same at the show, no business. Zippo, zero. Around one or two a woman walked up and asks for a price on a german vase. It was two hundred but I said forty, thought I might prime the pump.  She walked away and I said loudly to Bill, "Good, I am on a great losing streak here and I don't feel like messing with my luxurious misery for a mere forty clams. Leave me to plunge in my vortex, will ya."

Twenty minutes later the dame came back and bought the freaking thing. Damn it. Then an oversexed gay dude came over and offered me oral satisfaction right there on the spot. Said he brought knee pads. I told him that homie didn't roll that way and he accused me of being homophobic. He mentioned that he could suck a sixteen penny nail out of a two by four and that if I closed my eyes I could never never tell the difference but in the final analysis he just couldn't seal the deal. Ended up selling him a painting at a significant loss so that he would go away.

Then a wonderful architect from Malibu bought two more small paintings. The show would not be a total disaster, I would break even. And then in the last thirty seconds, an older woman who had been admiring my Thomas Hart Benton litho, said that she was buying it. Show took me to the mat but it was a success when the final bell rung. 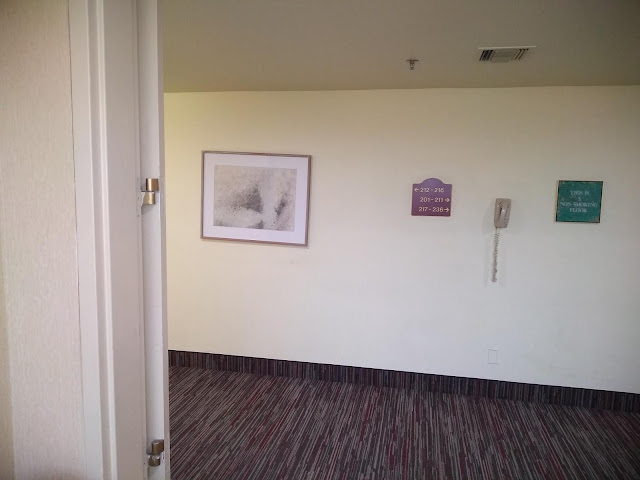 I checked out of the hotel yesterday morning. Said I only had one complaint. The print on the second floor as you get off the elevator is ridiculously crooked and in fact glued to the wall so that it can not be straightened. I told them that I was ocd, a very obsessive art dealer and that seeing things out of level like this messed with my head. That I came close to tearing it off the wall but knew there would be surveillance and repercussions. And that it was hard to patronize an establishment so aesthetically clueless. She said she understood.

Anyway, all in all , the weekend turned out to be a success. I love these stories where the hero faces an initial turmoil, then is knee deep in all kinds of antagonism and finally comes back to conquer after all in the climax of the third act. Textbook.
Posted by Blue Heron at 2:00 PM

You could have let him teabag, for crise sakes!

May the surgery go well and your recovery be expeditious. Cars - especially the ones that are supposed to do 'special things' for you - are often evilly possessed by unknown spirits at inconvenient times.

You are in my thoughts and prayers always. I am most certainly praying for a successful surgery tomorrow. Be well, friend. Your weekend though! OMG! Life is just so full of crazy experiences, and isn't it fun to revisit them here for all of us?! Love it!

Wishing you the best with the surgery. Thanks for the interesting story and photos of the show.

Nice to meet you! Thanks for taking our photo, I see we did not make the cut, maybe not stylish enough after all? LOL! So sorry to read here that you are ill, very best wishes to you!

Pink squirrel, some of my pics didn't come out very well. Send me a selfie to azurebirds@gmail.com and let me see what I got. Thanks, Robert