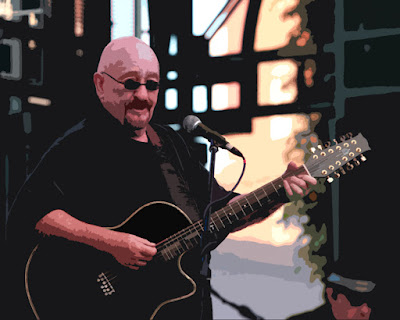 Leslie and I saw a fabulous concert last night up in Riverside. Accompanied by a bunch of friends we saw a double bill of Dave Mason and Richie Furay at the elegant Fox Performing Arts Center in downtown Riverside.

This is one of the most beautiful venues I have ever witnessed a concert, rivaling and perhaps exceeding the Arlington Theater in Santa Barbara. Splendidly renovated in its early Spanish Revival style, the decorated beams, tile work and fixtures are simply breathtaking. Before the show we had a nice dinner next door at the Food Lab and walked around the historic and magnificent Mission Inn. This part of Riverside is looking great these days.

Richie Furay started the show, accompanied by Mason's band as well as his daughter and another guitar/harmonica player. We were treated to his fine, strong voice and a great selection of work from the Buffalo Springfield and Poco. He really seems to be enjoying playing again.

I have not seen Mason live, saw Traffic after he left the band, but have caught a lot of his performances on line. He seems to only get better with time. His touch and feel are impeccable and reach right in to my personal wheelhouse. I love his music.

I can't break down the setlist, every song was fabulous. Highlights for me might be the rework of Low spark of high heeled boys and Shouldn't have took more than you gave.  Excellent performance of Watchtower. The Feelin' Alright encore with the band and Richie and his players, as well as an active audience participation, was joyful and robust.

Dave is in his seventies. He sat on a stool part of the time and people brought him cups of tea throughout the performance. He played a lovely red stratocaster and waxed about it prosaically. He mentioned at one point that you had to learn to sing to get gigs but that he was really about the guitar. I think he sings beautifully.

But his guitar work is stellar. His command reminds me of Jerry, it always has. A very well rounded and lyrical tone. Would rather see Dave play guitar than just about anybody out there right now. His music speaks to me; and I am a rather critical sort.

Hope to see him again one day and can't wait to return to this beautiful theater to see more music.