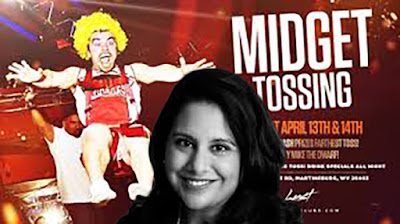 Conservative judges like to tout their originalist approach to applying the laws set out in the Constitution.

In a dissent yesterday, D.C. Circuit Appellate Judge Neomi Rao turns the constitution and the concept of originalism on its head. Her dissent starts on page 67.

It is the most ridiculous, ignorant and un American legal opinion I have ever read, contrary to all known constitutional precepts and legal history since the founding of our country. All designed as a nice payback for the clown who got her the job.

Judge Rao castrates the Legislative branch in her dissent, inputing all sorts of new limitations that are not written in our constitution. She strips Congress of executive branch oversight, except through the impeachment process. She evidently believes that it is up to the Federal judiciary to set out what is an impeachable defense and that the high court can quash impeachment proceedings if they do not live up to her standard of what constitutes "high crimes and misdemeanors."


The House of Representatives ... shall have the sole Power of Impeachment.
— Article I, Section 2, Clause 5

In her dissent she writes “Investigations of impeachable offenses simply are not, and never have been, within Congress’s legislative power.” This is pure baloney. Congress has always had legal oversight of the Executive branch. The constitution is clear that it is up to the House to set its own standards for impeachment. A formal vote is not required although it has been customary. Rao plainly differs:


Because Congress has failed to vote on a “formal impeachment investigation,” Rao argues that Trump and Mazars are free to treat Congressional subpoenas as if they don’t exist.

This woman, a Trump appointee and ex clerk for Judge Clarence Thomas, is an obvious shill for the President, bereft of a scintilla of intellectual integrity. I can't imagine her taking this stance if the roles were reversed and a GOP house was investigating a Democrat President.

By the way, Rao made her mark in law school by taking a stand on the propriety of dwarf tossing, writing at least two law review articles and a blog post in which she defended the practice, apparently popular in Florida. If you are not familiar with it, here is a definition:


Dwarf-tossing, also called midget-tossing, is a pub/bar attraction in which people with dwarfism, wearing special padded clothing or Velcro costumes, are thrown onto mattresses or at Velcro-coated walls. Participants compete to throw the person with dwarfism the farthest.

This is my favorite line from her law review abstract:


By focusing on values such as human dignity, modern constitutionalism deprives rights of their special force.

God forbid we think about human dignity. Or apparently the constitution. What more havoc will this woman wrought?
Posted by Blue Heron at 10:05 AM

So, the House can impeach but, cannot investigate possible impeachable acts? Is that f....ing crazy, or what???