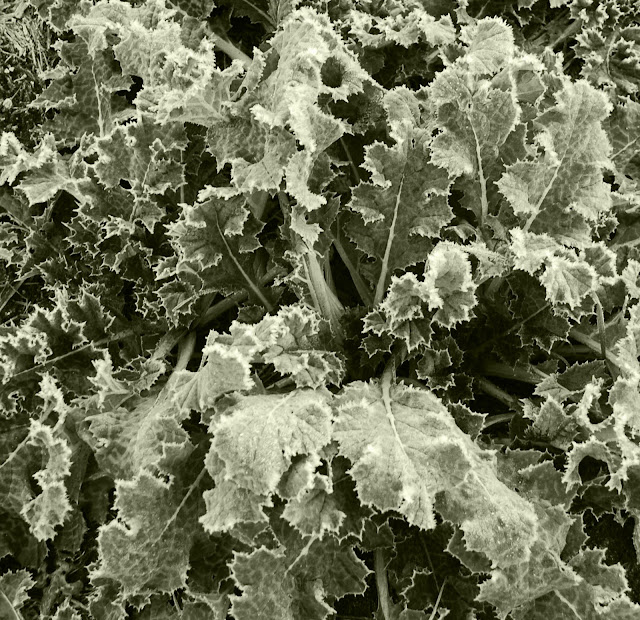 What kind of a fool of a man gets lost not a mile from his own door? Well maybe lost is not the proper term, perhaps trapped, stuck and bogged down in a thicket would be a more accurate description of my dilemna.. A brief synopsis is probably in order.

I woke at dawn this morning. There is an old dictum that photographers mutter, "morning light, evening light."  Galen Rowell may have written on the subject but most shutterbugs agree that they are the magic hours. I had missed my shot yesterday, since it is terribly difficult to take a picture when your camera is perched miles away on the top of your desk. So to atone I hurriedly dressed and went outside to face the chill.

It was plenty cold last night but not as cold as the night before. I still had to scrape the frost off the car windows with the old plastic hotel key I found in the side pocket of the van. I drove over the narrow winding road out of the Santa Margarita River valley. The road is now washed out in spots, trees and boulders have tumbled across our path in spots and the road peers dangerously down to the icy river far below. 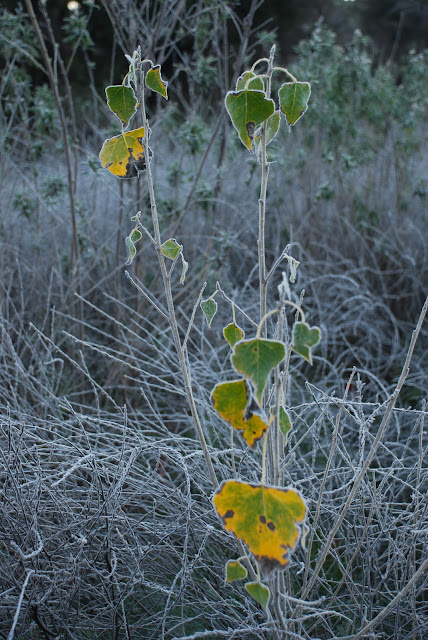 I have lived on the Santa Margarita for 23 years and a valley over for another seven. A relatively short fifty mile aquifer, it is the last free flowing coastal river in Southern California. The river is a rich habitat, it's arbors principally sycamore, cottonwood, alder, mulefat and willow, with an occasional palm visitor that finds it's way somehow into the foreign habitat.

The river habitat is home to weasel, beaver, bobcat, coyote, raccoon, deer and lion. Leslie saw a fox and a ferret last year. I once came within arm's length of a bighorn ram. Hawks of every stripe, owls, a very occasional golden eagle and lots of noisy crows and jays complete the bucolic picture. And of course blue herons. Fish, chubs, killfish, mudsuckers, trout in some spots and of course the mythical red eye bass.

I love the river. I love how it seals out the world on my flank, the top of river slope being a mere twenty feet from the end of my drive. I love the fact that the people who have chosen to live on its side have decided to remove themselves one step farther away from the world than normal folk. The road is a further impediment to the city dweller who might think of coming and stealing its beauty without making the proper sacrifice. But the river and my long relationship has now rendered me unfit to live in real urban civilization.

I parked my car near the mailboxes and walked around the metal gate, designed to let the horses in and keep the motorcycles out. I walked down frosty trails until I could see her in the distance. The river bed was a mixture of mud bogs and tules, reeds and toppled trees.

The recent rains have really altered the river bed. The flow of water was so great that the native plants that managed to survive are now stooped and bent over like an old man with a cane. Huge sycamores now litter the bottom along with a small assortment of old tires and plastic.

This was not the biggest rain in memory, not by a long shot. In 1993, we river dwellers were trapped for nine days. The river killed four folks that year, swept them right out to the Pacific and they were never found. We had a several hundred yard mudslide, 5' high in some spots. Several spots up the road made travel impossible as well. No water, power, food running short. Brett hiked over the mountain and brought me a steak and the Los Angeles Times. True Friend. The nine days was one of the greatest times in my life. Got all the grove work done and insulated ourselves from the world's cacophony. 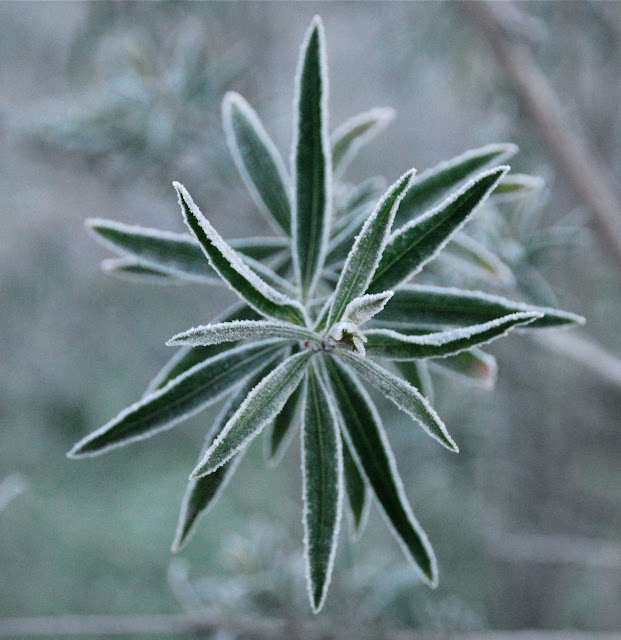 When a river runs that high, it is like living in the time of the volcanoes and dinosaurs. Primal. The earth's topography is changed forever. And you can hear the sound of the river for a mile.

I got down to the river after traversing a bunch of mud bogs, slides and thickets. Unfortunately yesterday's picture was yesterday's picture, not destined to be found again. But it was great to take pictures of some of the frostbitten foliage and to tread on trails with virgin footprints. 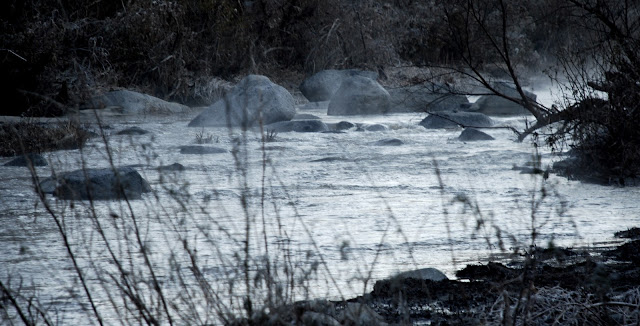 I hiked upriver a ways.  Areas that were under strong rapids a week ago are now relatively calm.  People think that rivers are high after a rain but actually the inverse is true. They get lower. All the pooling and ponds that appear during the dry months are whisked away with the power of the storm's water and runoff. The topography looks like a bomb has gone off. In a few months the wind and time will take the edges off of everything and it will all look normal again.

The Santa Margarita starts at a point fifteen miles northeast of Temecula where the Temecula River and Murrietta Creek meet. It flows through the steep Temecula Canyon and finally out to the Pacific, culminating with the ocean near Camp Pendleton. 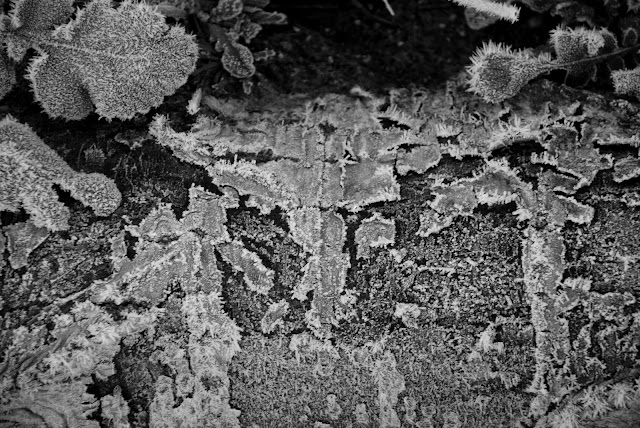 In 1881 the California Southern and the Atlantic and Pacific Railroads formed a joint venture to create a rail line that would run from Albuquerque to the Colorado River and on to the Pacific. In 1882 hundreds of chinese coolies started building the 16' railroad bench that flows through my steep valley. The local Luisieño indians told them that they were not going high enough but the brilliant engineers wouldn't hear of it. The railroad washed out three times, was completely annihilated in the great rains of 1884 and finally abandoned in 1891. Sometimes it pays to listen to the locals. Vail Dam was completed in 1948 and drastically reduced the historic flows. But I will never forget Tom Palmer pointing out the old terminus point roughly 60' over the top of my roof. 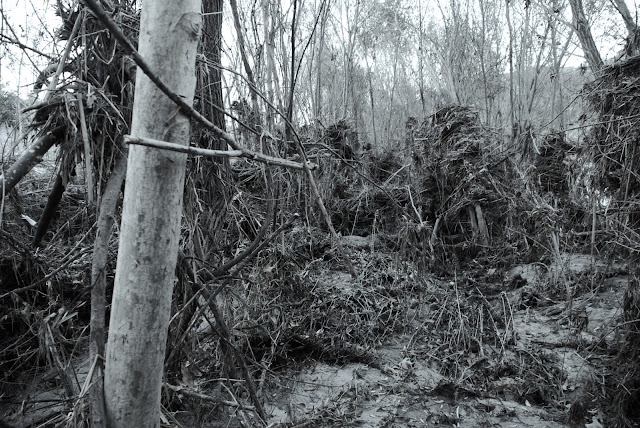 I started to hike back this morning and as I said sort of got lost if that is possible, when Gavilan Mountain sits on your left and the sliver of a moon sits perched on your right shoulder. But I was in the middle of a thick bramble of branches. I started scrambling on the tops of trees trying to find my way out. Once my foot submerged when the vegetive mass gave way and I found myself in a mud puddle. Nothing but thicket, not really uncomfortable in my fleece, but not finding an easy way back to my starting point.

It was at this point that I had my epiphany. For one I was totally happy to be out on the frosty river this fine morning. But I also felt good knowing that I was still capable of getting lost. That so often we find ourselves in these tight little lives that leave nothing to chance and they are hermetically sealed and temperature controlled and where all of the oxygen is filtered. And it just felt so good to be back in the wild. 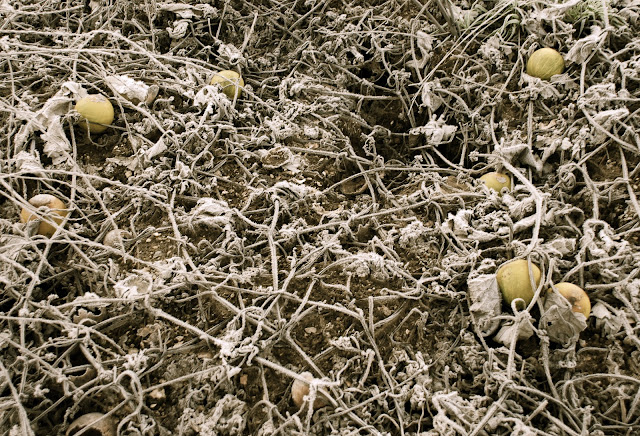 I don't know if I feel comfortable calling myself an artist, certainly I write, occasionally draw and paint and often point a camera. But as a person who spends an inordinate amount of time in these pursuits, I think that I must seek out chaos and the wildlands often in order to feed and cultivate my craft and soul. Probably why lost roads in Utah and New Mexico scratch my itch so. We all need to get lost now and then. Helps the spirit when we eventually find our way.

I climbed over and through the trees and tules and finally found an old trail. Not perfect but solid enough to get me back to my car. Wishing you peace, safety and happiness and all the best in the new year. 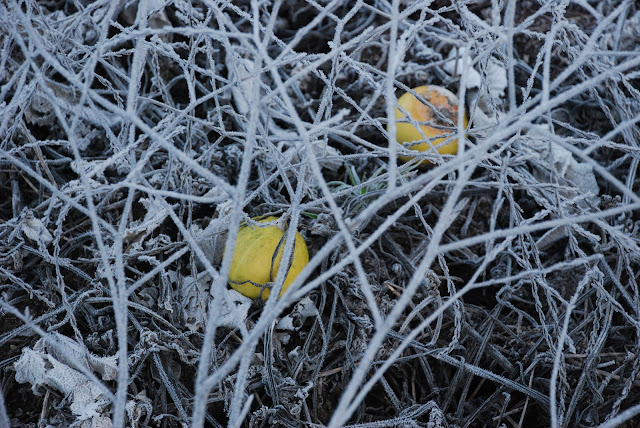