Last of the Hollywood swingers 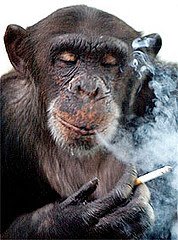 I was a third rate stringer and it was one of the last assignments I managed to pull before the sorry rag bit the dust. It was back in 91 or 92 when they sent me out and I swear I will never forget the interview for the rest of my days. He was one of my first big time stories. All the players are unfortunately gone now so I guess I am free to spill.

It was a long drive out to Desert Hot Springs. The place was not quite as bad back then as it is now but it was definitely showing its wear. I sat in a flimsy deck chair on the hot concrete while the older black attendant in the starched whites wheeled the aging chimp down to his favorite table at poolside, her fat triceps bulging generously over her sleeves.

He held her right hand gently in his and rested the left around her neck while they mutually pivoted him into his chair behind the wrought iron table. A dance move worthy of Charisse and Astaire, graceful and obviously well practiced.

It took a few seconds before he even would look at me, his infirm condition possibly being a source of shame, even at this late stage.

“Mind if I smoke?” Cheeta asked me, not bothering to wait for a response. He took a long drag off the kool menthol and blew a cascade of minty smoke across the veranda, finally looking straight into my eyes. “So, what can I do for you?”

I stammered a bit. It is hard to keep a straight face and your mind clear when faced with a smoking chimpanzee who probably speaks better english than you do. But I was a professional, I had a rent check that needed to get paid and I frankly didn’t have time for bemusement.

“The standard stuff, Cheeta, your childhood, training, working with Weissmuller and O’Sullivan.” My brain had locked up a bit but how often does one get introduced to a talking chimp, let alone a celebrity like Cheeta?

The chimp cantilevered his arms out in a long stretch, momentarily showing a blue depends diaper beneath his robe. He quickly pulled the frayed terry robe closer together across his sternum, the gray hairs on his chest looking long and sparse.

“ First of all sonny, just how goddamn old do you think I am?” he said with a touch of scorn. "My childhood, a typical childhood. Mother, father. Nothing out of the ordinary. What did they call me? Precocious, that was it. Quite the novelty," he coughed.

“Weissmuller, Crabbe, they were gone long before my time. Never met them, hear that Johnny Sheffield boy was a real prick. Used to tease the talent. I worked with Ron Ely, the sixties Tarzan. Bloom was off the whole franchise by then. Agent told me to ask for residuals instead of an episode fee. Real mistake on my part, but who knew? Nothing went anywhere. Ely was a lunk who couldn’t yodel worth a crap and most of the kids opted for Daktari. Clarence the Crosseyed lion. Knew him well. Drank like a fish.”

The chimp pulled out a pencil and started working on an unfinished crossword on the table, seemingly forgetting me for a moment. He had donned his gray bifocals and peered at me over the top, “Let’s see five letters, fourth letter l, genus of owls.”

I shook my head wordlessly, offering no help, biology and taxonomy never being much of my game. “Ulula, that works, doesn’t it? You know how hard it is to work a pencil without an opposable thumb?” “The chimp that you want is Mr. Jiggs, kid. He worked on the original Tarzan the Ape Man, all the way through the New York Adventure. I knew him. A real gentleman. But now he’s gone, like the rest of them. Long gone.”

“Course Jiggs and Jiggs Jr. had their stand ins as well for the rough work. Harry and Zippy and C.J.. Wouldn’t do the tough stunts. Got all showbiz. Can’t blame them, plus they having the gout and all. It was different in the studio system, we had real stars back then and the networks and studios knew how to take care of the talent properly.”

Cheeta looked me dead in the eye and cut the longest fart you ever heard, without even breaking a smile. The kind that peels paint off the wall. Nothing quite so foul as a monkey fart, better take my word for it. He jumps right on ahead like nothing has ever happened.

“ Got my S.A.G. card in ‘66, agent thought the sky was the limit. But we had all the other crap back then, Vietnam, women’s lib, Watt’s riots, suddenly nobody gave a crap about a talking primate. Not to bitch too much, I worked now and then, a few guest shots on Lancelot Link, did a commercial for Benson and Hedges, had a pilot in production, never went anywhere. Victim of timing.”

“Now look at me. All the old guard is long gone. I can hardly scrape together enough pulses that register nowadays to get a decent game of pinochle. Too much whiskey, too much cholesterol, the old ape pack is just about history. Nobody left,” he said quietly and wistfully.

I felt a bit uncomfortable, I was just a young cub trying to get a story published on deadline and didn't really know what I could say. I thanked Cheeta for his time, told him that I would contact him if I needed any more details to help flesh out the article. He mustered up that old Hollywood fake smile for the camera one last time and then I was off by myself on that long ride back to the city of angels.

I read somewhere that he had passed last month and admit I felt a pang of sadness and regret. I just don’t think we will see his kind again.  The last of the great Hollywood chimps.