Weise and Young vs. The United States of America 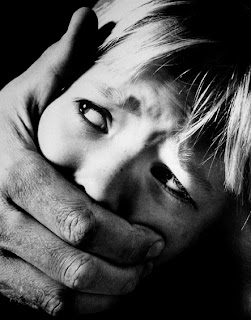 The Supremes, in their munificence, have declined to take up the case of the Colorado couple who were denied entry to a speech by then President Bush in 2005, because they had a bumper sticker emblazoned on their car that read "No More Blood for Oil." The robed ones' gave no reasons for their dismissal of the lawsuit. Sotomayor and Ginsburg were dissenters. Ginsburg wrote that she could not “see how reasonable public officials, or any staff or volunteers under their direction, could have viewed the bumper sticker as a permissible reason for depriving Weise and Young of access to the event.”

The couple was escorted from a Denver Museum where GWB was giving an open to the public speech on Social Security. A lily livered Federal Appeals Court dismissed the suit in January, with the majority saying that the defendants were entitled to immunity from the lawsuit because there was “no specific authority” on the question of “how to treat the ejection of a silent attendee from an official speech based on the attendee’s protected expression outside the speech area.” What a crock.

Once again, free speech gets trampled by the Stevens Court in their efforts to serve the aristocracy. The Scotus continues its run of obsequious toadying to the Executive Branch, that is if the Executive Branch is seated Republican. Where are all the voices of the so called right wing libertarians decrying this decision? Strangely silent, you can be assured.

I quote from the NYT:

The dissenting appeals court judge, William J. Holloway remarked that the case was an obvious violation of the First Amendment. “It is simply astounding that any member of the executive branch could have believed that our Constitution justified this egregious violation of plaintiffs’ rights,” he wrote. Justice Ginsburg said that no specific authority was needed, given a half-century of general precedent that applies “even to conduct startling in its novelty” — throwing people out of a public government event for views expressed elsewhere. “Ejecting them for holding discordant views,” Justice Ginsburg said of the plaintiffs, “could only have been a reprisal for the expression conveyed by the bumper sticker.” Such official reprisal, she said, offends the Constitution.


I furnish a portion of the dissent which I find illuminating:
The Court of Appeals suggested that this Court’s deci-

sion in Hurley v. Irish-American Gay, Lesbian and Bisex-
ual Group of Boston, Inc., 515 U. S. 557 (1995), could have
justified a decision to exclude individuals who appear to
disagree with the President’s views. But the comparison
serves only to highlight the unlawfulness of Weise’s and
Young’s alleged treatment: Not only was this an official
presentation of the President’s views, not a private act of
expression as in Hurley; in addition, unlike the Hurley
plaintiff who sought to engage in competing expression,
Weise and Young were “silent attendee[s],” 593 F. 3d, at
1170 (emphasis added). Their presence alone cannot have
affected the President’s message. Therefore, ejecting them
for holding discordant views could only have been a repri-
sal for the expression conveyed by the bumper sticker.
“Official reprisal for protected speech ‘offends the Consti-
tution because it threatens to inhibit exercise of the pro-
tected right.’”  Hartman v. Moore, 547 U. S. 250, 256
(2006) (quoting Crawford-El v. Britton, 523 U. S. 574, 588,
n. 10 (1998); brackets omitted).
You disagree with the President, expect to lose your rights to free speech. The Federalists have quite a royalist streak, with an inherent belief that the people serve the state rather than the state serving the people. Jefferson would turn over in his grave if he saw the mockery that we have become and the ease with which we have surrendered our civil rights.
Posted by Blue Heron at 2:22 PM

If I remember correctly, it was a GWB policy to have the secret service set up "protest/free speech" areas for a lot of his speeches. They were sometimes substantial distances from the site of the speech (half a mile, etc.). Cheerleaders don't like it when you are not participating and cheering on the team. Free speech is fine as long as nobody hears it.

Robert,
I want to comment about the first two items on your blog-the couple denied entrance to an Obama speech and the Iott controversy--dressing up in a WWII German uniform.
As to the denial of admission--the words "bumper sticker" is used to describe the objectionable item. Was the "bumper sticker" on the car--how close did they park the car so that they were identified as the persons owning or riding in the car? Something is missing as to description of the objectionable item. And I believe that the president's security people have a duty to use their instincts to prevent someone who they think wishes to harm the president from getting too close to him.
As to Iott's costume--I feel the same way about it and him as I do about people "honoring" the Confederate soldiers in Civil War reanactments--which I don't like at all. People don't learn about history viewing the smoke from a canon firing blanks--in fact what the don't learn, which is what they should learn, is that war is death, destruction and pain--not honor and glory. Civil War reenactments are false history. Having said that , most of the Confederate soldiers--the enlisted people--were there involuntatrily. I am trying to remember a book a read a while ago--about how men were forced into the regiments. I think it is called the State of Jones. If I am right you might find it a good book to read. Confederate enlisted personnel deserve to be honored, but not glorified.
Back to the "German" soldiers in WW II. Read the old, not recent, book about the landing in Normandy--how many of the "Germans" who surrendered--after killing their sergeants--were Poles, Romanians and etc. A major reason for the German's disaster at Stalingrad was that their supply lines were "guarded " by Italians and Romanians--who didn't want to save the Germans--and were there only by force of German arms.
Finally, a really terrifying book I am now reading is called the War Lovers, Rosevelt (Teddy), Hearst, and Lodge. It is terrifying how easy it was for a very few men to cause the U.S. to start a war with Spain--because Rosevelt believed that war was good for the "spirit," manliness, of a nation, and Hearst wanted newspaper circulation--and Lodge just adored Teddy. Did that happen much more recently or is it happening now? I don't know.
Uncle Norm