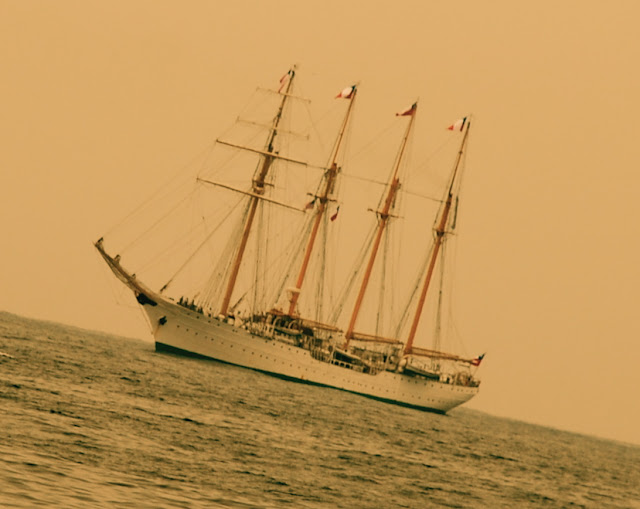 You may remember the magnificent four masted ship on the horizon last week on our voyage to pour Ruth's ashes into the sea. I was listening to the news today on NPR and learned something about the boat and its ignoble history. She is a four masted barquentine of the Chilean Navy named Esmeralda. They call her the White Lady. The steel hulled vessel is the second longest and tallest sailing ship in the world. This boat was built in Cadiz, Spain in 1954 and is the sixth Chilean ship to bear the name Esmeralda.

In fact she has a rather sordid history. According to reports by the United States Senate, Amnesty International and the Chilean Truth and Reconciliation Commission, the Esmeralda was used as a floating torture chamber for dissidents and political prisoners from 1973 to 1980. This is during the reign of Dictator General Augusto Pinochet, who aided by the United States government, successfully plotted and carried out a coup to kill and usurp the democratically elected socialist President Salvador Allende.


In 1973, Maria Comene was held as a political prisoner on the ship for 10 days."It is a bad boat," Comene says. "A boat where blood was spilled."

It is suggested that over 110 prisoners, seventy men and forty women, were kept on board, subject to rape and genital shocks and brutal beatings. It is said that the British priest Michael Woodward died as a result of the brutal interrogation and torture he endured on the rigger. A good synopsis of the ship's bloody history can be found here. The Amnesty International document here.

The ship's captain says no one was tortured and besides,"Our work isn't to go around worrying about what happened in Chile so many years ago. It is to look towards the future," he says.

No one wants to look at the past. Deny until the event is a distant memory and then call for a look to the future. The Rupert Murdoch defense. Nuremberg. Eichmann. Custer. The chilean soldiers were just doing their job, just following orders, keeping the world free from communists, even democratically elected socialists.

People do need to move on, but penance can only take place after the truth is established and acknowledged and actual contrition is present.


"In Chile, people try to avoid talking about the past. The youngest generations believe the world began with them; anything that happened before they were born doesn't interest them."Isabelle Allende 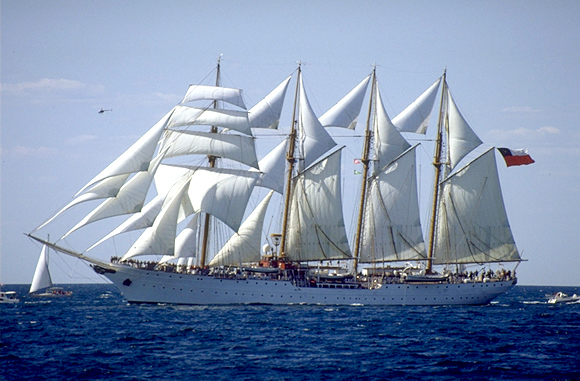 ***
I was talking to a friend about the relatively new South American restaurant in Encinitas, Q'ero. He had visited it and really enjoyed it. I told him that I had not had really good luck with food from this region. Never developed much of a taste for guinea pig. This restaurant actually features Peruvian cuisine. The last time I had Peruvian food I learned a very valuable lesson. Never talk politics with the chef until you have received your food.  This chef/owner in San Francisco was a good friend of the dictatorship. There were about twelve of us, after a show at the Concourse. The food came out with a half inch of salt poured over the top. Completely inedible. We left. I learned something.
Posted by Blue Heron at 1:24 PM

She is a four masted barquentine of the Chilean Navy named Esmeralda. They call her the White Lady. The steel hulled vessel is the second longest and tallest sailing ship in the world. This boat was built in Cadiz, Spain in 1954 and is the sixth Chilean ship to bear the name Esmeralda.