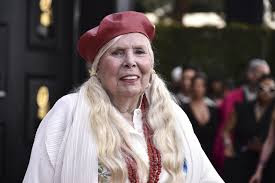 I admire much of Joni Mitchell's catalog and music but am not so keen on her as a human being. She has a habit of gratuitously and needlessly denigrating her peers. Last week during an interview her nasty bite was directed at two rock icons, Grace Slick and Janis Joplin, the latter long gone and not able to defend herself.

But hooray for Grace, she didn't have to take her crap. Whose business is it policing who is sleeping with who anyway? How judgmental. Wasn't long ago that Joni was dissing Neil Young.

You know, Neil Young is singing Rock n' roll will never die, and Neil never rocked and rolled in his life. I mean, he rocked, but he didn't roll. He has got no swing in him.

Before that it was Bob Dylan, who she accused of being a thief.

“Bob is not authentic at all: He's a plagiarist, and his name and voice are fake,” she said. “Everything about Bob is a deception. We are like night and day, he and I.”

She also said that Dylan never brushed his teeth. One has to wonder what kind of surveillance she was capable of to make such a sweeping condemnation. Then there was this:

“Musically, Dylan’s not very gifted; he’s borrowed his voice from old hillbillies. He’s got a lot of borrowed things. He’s not a great guitar player. He’s invented a character to deliver his songs, it’s a mask of sorts”.

As brilliant as Joni Mitchell is on occasion, her songbook catalog pales next to the contributions of Bob Dylan. He has no equal, constructed identity or not.

Of course, her ire at her fellow artists goes back even farther. She wrote a less than charitable song about the bluesman Furry Lewis.  Furry was none too pleased.

"The way I feel" says Furry "is that your name is proper only to you, and when you use it you should get results from it. She shouldn't have used my name in no way, shape, form or faction without consultin' me 'bout it first. The woman came over here and I treated her right, just like I does everybody that comes over. She wanted to hear 'bout the old days, said it was for her own personal self, and I told it to her like it was, gave her straight oil from the can." He stares at the surrealistic photo on the Hejira cover. "But then she goes and puts it all down on a record, using my name and not giving me nothing! I can't stop nobody from talkie' 'bout Beale Street, 'cause the street belongs to everybody. But when she says 'Furry,' well that belongs to me!"

I have to wonder about an artist who feels the need to attack his or her peers incessantly. Honestly sounds like a real bitch. And didn't she once marry her own bass player, Larry Klein? Her nastiness is unbecoming.

Then again... she created Blue, my favorite album.