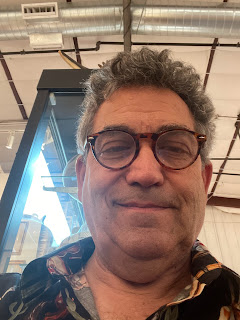 I am still pretty exhausted. Chicago, Albuquerque, Santa Fe, Phoenix, Palm Springs, finally home and then an auction yesterday. Picked up two collections in the last day as well. I can't quite remember pushing it this hard, without any kind of break, at least for a couple decades anyway.

Perhaps I am dreading the outcome of my biopsy at the end of the month and am trying to cram as much work and life in as I can? Who knows... Out of my paygrade.

Auction did not fire as I had hoped it would, hundreds of man hours photographing, measuring, weighing, cataloguing and inputing, not to mention a considerable amount of money wasted, with little return.  Live and learn. 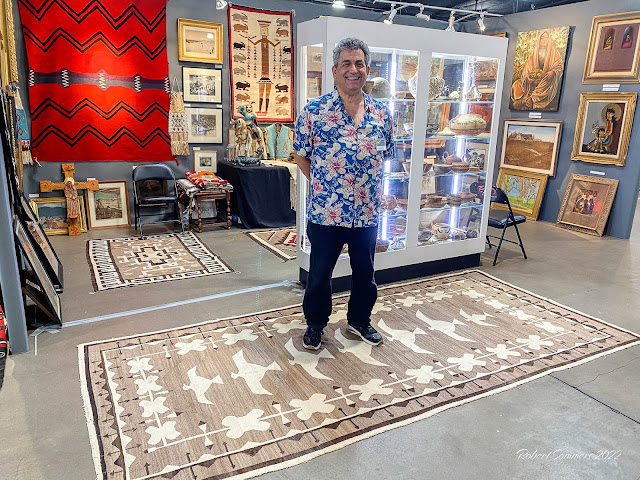 Certainly too tired to expound too much on the trip, a few things I found interesting at the time no longer seem so. 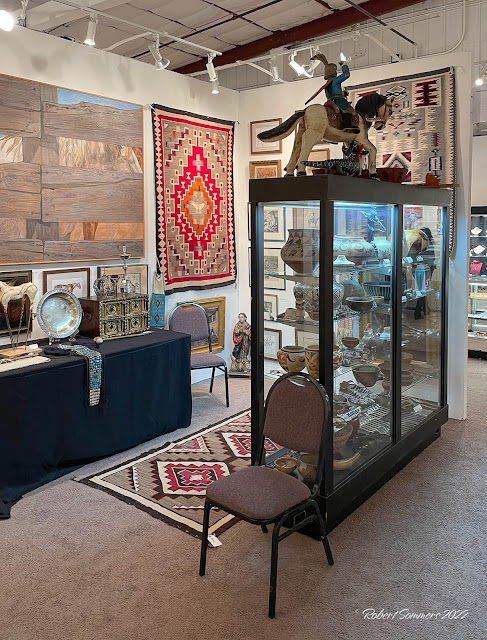 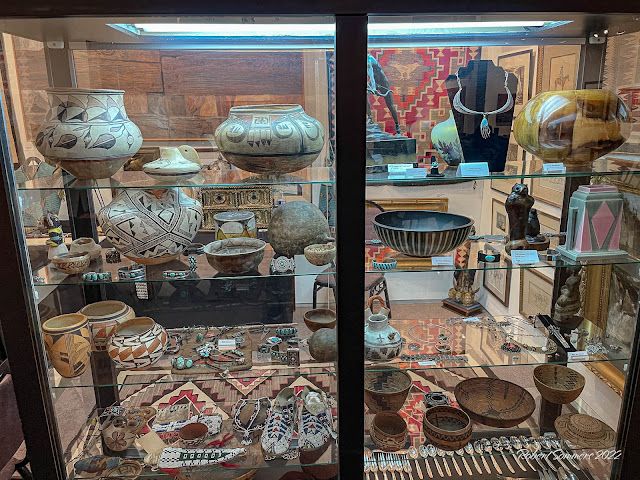 Both New Mexico shows were surprisingly good.
I brought good things and found good things at the show which I sometimes flipped.
I sold an expensive painting or two and a fine germantown weaving to a museum.
Many of my cohorts did well, happy for everyone and hope that those that did not get their turn next time. 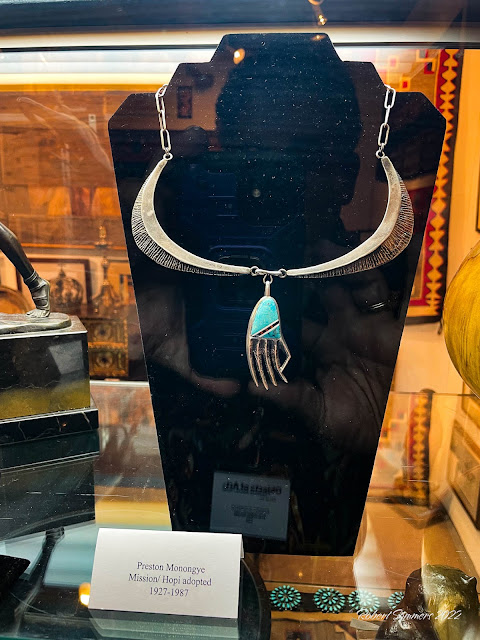 Some purchases I will probably hang on to for a while.

It cost a small fortune and will await a special buyer. 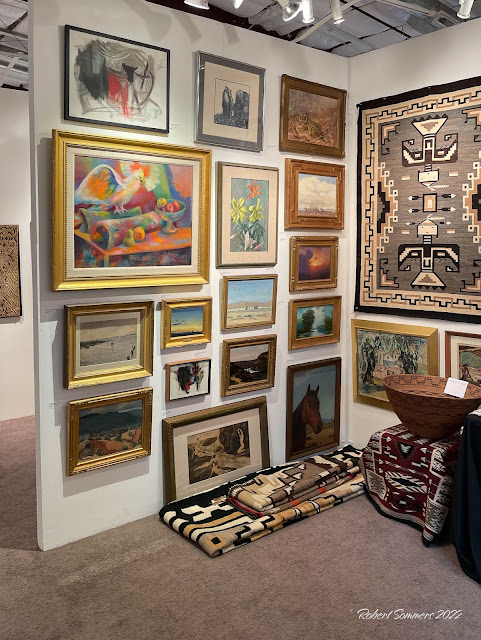 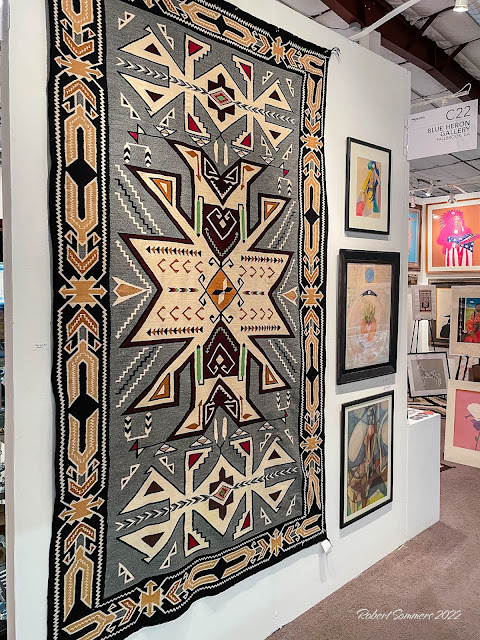 My experience ran the gamut, from the upscale Hyatt to a particularly creepy Motel 6.
Which was still better than the Days Inn in Holbrook, with the awful shower and continual loss of power.
I ate at the opulent Sazon for the first time, with the Stoops and Calvins', once again seated in Santa Fe across from Karl Rove (who I was tempted to greet with a kind witticism about the establishment Repubs not looking so bad these days but did not) and also at McDonalds. Agony and the ecstasy.
Would have been Denny's but there was a 45 minute wait. Wonder why they are having a hard time finding employees? 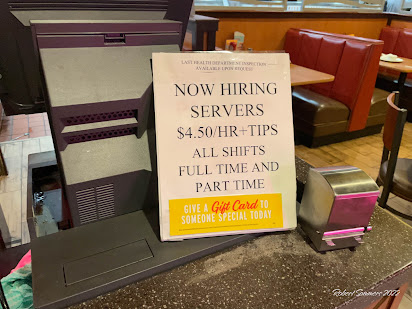 Perhaps it has something to do with the payscale? Alas, there would be no Denny's pot roast for your faithful scribe this journey.
Barry jumped in the van after the failed Dennys run and we headed to Mickey D's.
Having a captive audience and foil in the car I turned the heat up while ordering, to the consternation and embarrassment of my guest, me inquiring if the chef had a nightly special or recommendation that evening and asking about the free range status of the beef.
Hate captive cows, don't you?
Friedman was sure that my patter was lost on the young hispanic cashier but did wonder if I would get a loogie in my bun for my general temerity and dopey question? Didn't have time to see where they were sourcing their spuds. Probably extruded anyway... 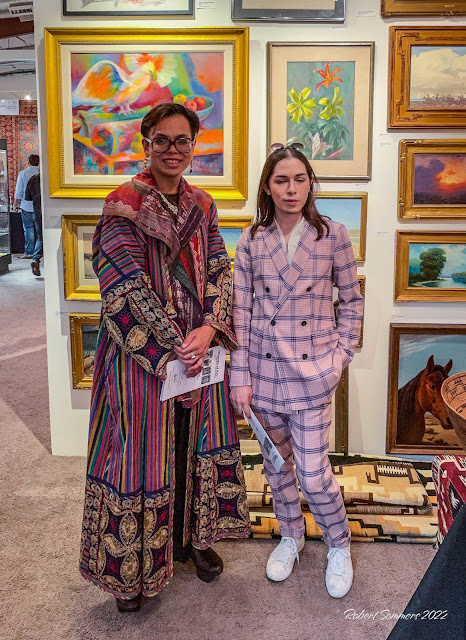 As always, all kinds of humanoids at the show, like this pair to draw to. Nice guys. Standing in front of a recently obtained Andrew Dasburg canvas. And a Henriette Wyeth.
The other tranny couple with the tattooed head and gold lame outfits came by too but they were sort of assholes, taking umbrage at me pointing to their "get-up."
Hey, if you are dressing to visually offend, you should not be so easily offended, my fluidly inked and gilded friends. 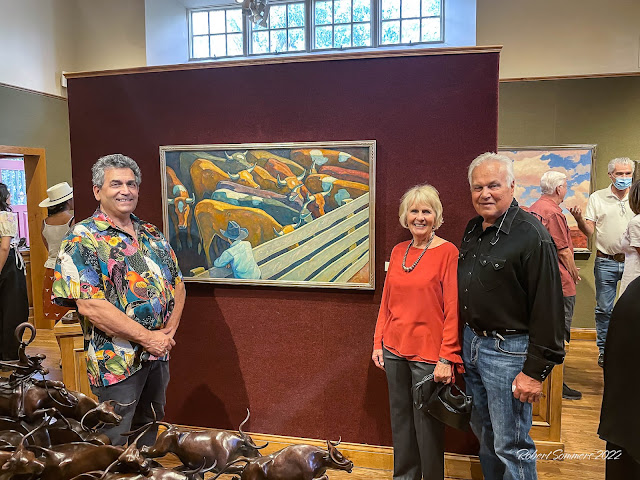 One of the cool things that happened was that one of my favorite artists, Howard Post, came by the booth with his charming wife.
I have loved his work since I first saw it at the museum in Cody thirty years ago and it was a thrill to meet them. I later went to his opening at Legacy Gallery with Steve.
Great folks. By the way, that is Billy Schenck holding court in the back with his wife Rebecca. Saw a lot of old friends this trip, old home week. 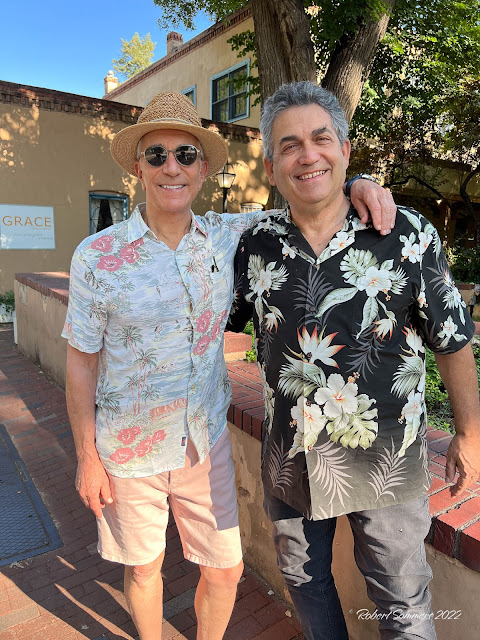 Had a nice breakfast with Barry, Joseph and Linda Sherwood at Palacios Cafe, too short, wish we could hang out more often but will take what I can get.
Linda tried to smooth out my errant eyebrow but as you can see, it was for naught.
Tony Abeyta was there too, with his girlfriend and a groupie or two.
I could do a whole scatological rundown on the trip but will thankfully, spare you everything but the basic outline.
My large intestine, which has never before let me down, chose this very trip to rebel.
It started off with my chazering a whole tub of biscotti in the van on the way out, it turned to a fine cement in my gut, the final product  would have required a jackhammer to penetrate. So I walked around with a side ache for about ten days until god finally had mercy on this humble colon and I was able to resume my standard issue.
It was a different sort of trip. All business. Never took my camera out of the bag once. No Pecos, no hiking. My host in El Dorado was down with a bad back and non ambulatory. No writing, a lot of eating at home. 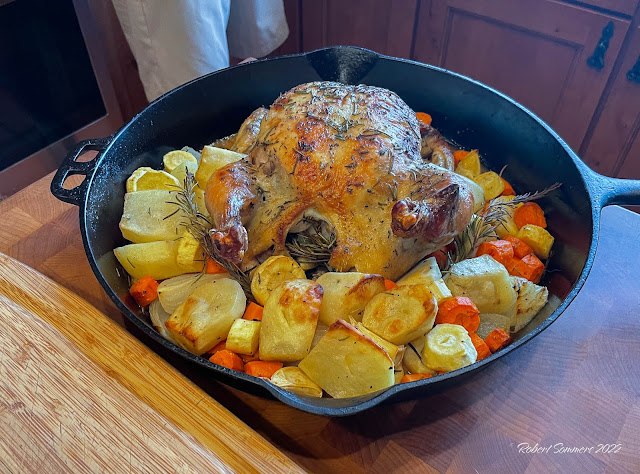 Sue and Steve Stoops had us over for her wonderful baked chicken and root vegetables one night. Allowed me to watch the penultimate installment of Better Call Saul at the house they rent. Absolutely delicious.
I ate at the Pantry a lot, very dependable. The Indian buffet once. No Harry's or Santa Cafe this year. Or Adelitas or Plaza cafe. Stuck with red chili. 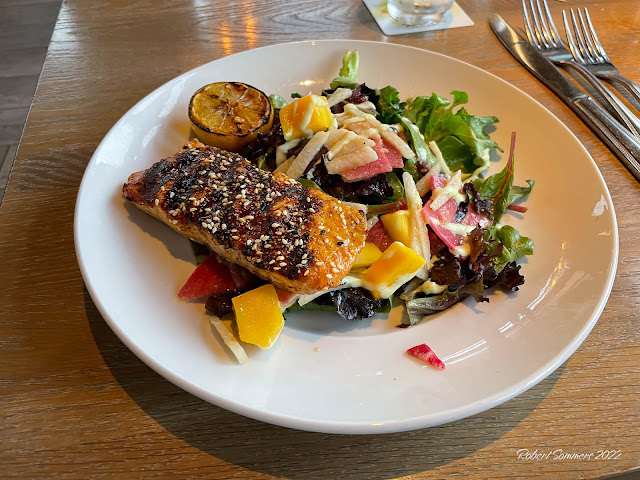 Dain, Ben and I had a nice meal at Seasons in Albuquerque, I had perfect salmon over mango and radish.
For two days my parking and headlights on the Ram wouldn't stop flashing on their own accord, uninvited. I called the dealership and they said they don't do commercial, I would have to go an hour away to Albuquerque. My show setup started in an hour.
There is a quonset hut behind the pantry, a fellow named Chris, old school Santa Fe hispanic. He told me to come back at 10, put a scope on, did a 30 minute battery reset and I was good to go. Bless you Chris, highly recommended.
What else? Albuquerque had more drugged out homeless street urchins than I have ever witnessed, maybe the worst city I have ever seen for being totally whacked. Right up there with Eureka and San Francisco anyway. Feral. 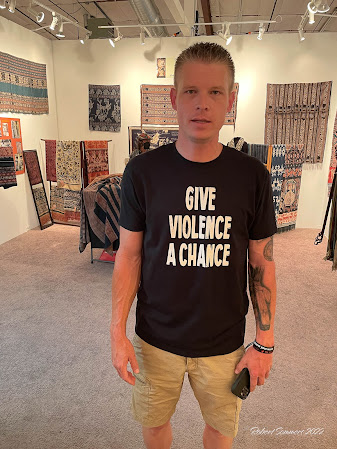 A couple provocative t-shirts. I liked the nuttiness of this one until I saw that it was part of the uber evangelical lions not sheep cult and that the guy was probably serious. 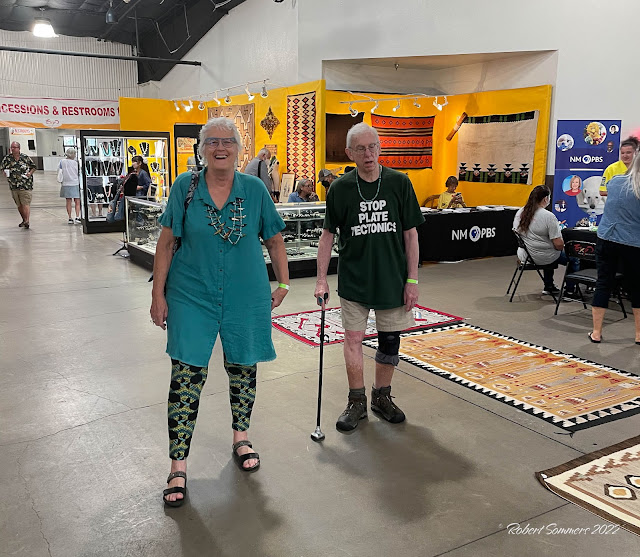 This guy's gave me a chuckle, Stop Plate Tectonics. 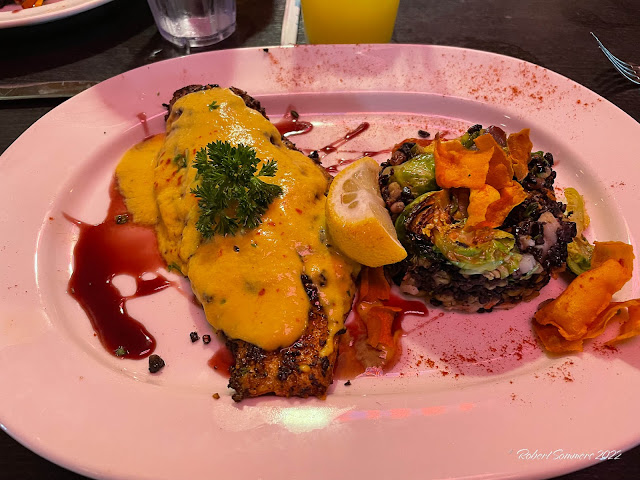 Had two great meals at Jambo, a perennial favorite. This hibiscus glazed red snapper was beyond good. We talked to the owner, Ahmed, a great man from Kenya and he actually visited us a few days later at the show. 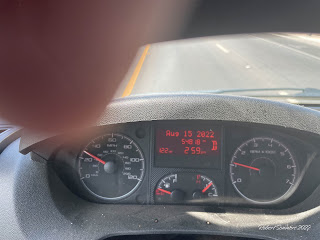 I had a drop off on the way home in Scottsdale and spent the night at a friend's home. It was awfully hot there but nothing like the heat I would encounter after my stop in Palm Springs, it was 125° in my car outside of the pizza joint. Took this shot after things had cooled down a bit.
Ran into a few monsoon rains that cooled things down a bit too.  Hey, next time you travel west on the 10 look at the road signs for Eagle Mountain. I saw two that were misspelled Eagle Moutain. Wonder if anybody else has ever noticed?
So I got home and hit the ground running, still haven't unpacked, need to weed the yard and do a thousand different things to catch up.
But tomorrow I will have brunch with my sister in law Julia, down from Toronto and then chill out and rest for a day. Really need it.
* 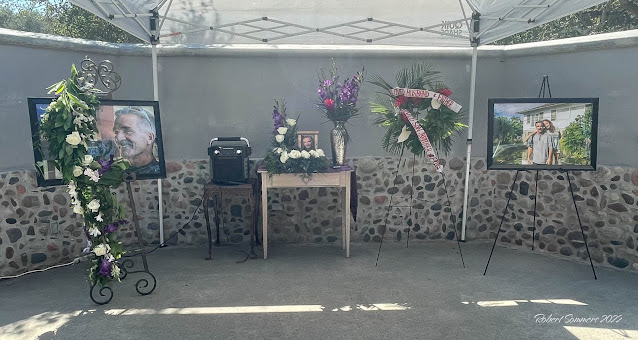 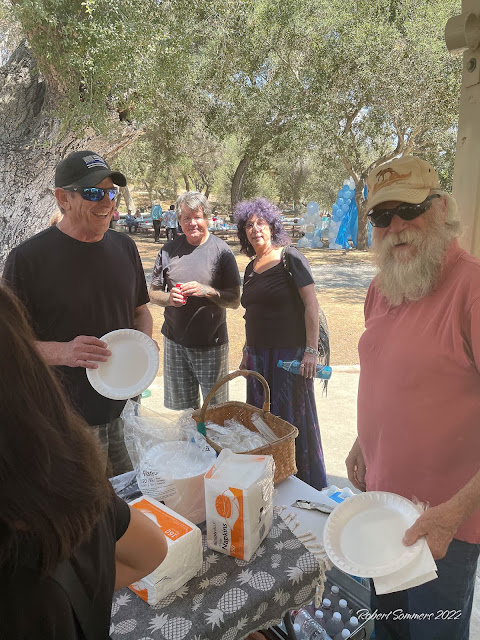 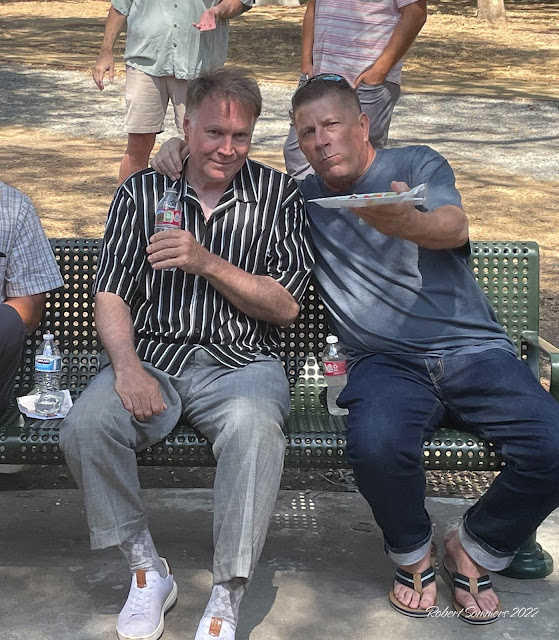 We went to a memorial this afternoon for my late friend Alan Gracey in Live Oak Park. Fought the gallant fight against cancer, he will be greatly missed.
It has been a bad couple months for losing loved ones in Fallbrook. Doug Clements, Dr. Manring, Mike Breining, Tom Odendahl, Alan, Arturo Morales, may they all rest in peace. In addition my old friend and mentor in San Diego, Jim Milch, has recently passed away. 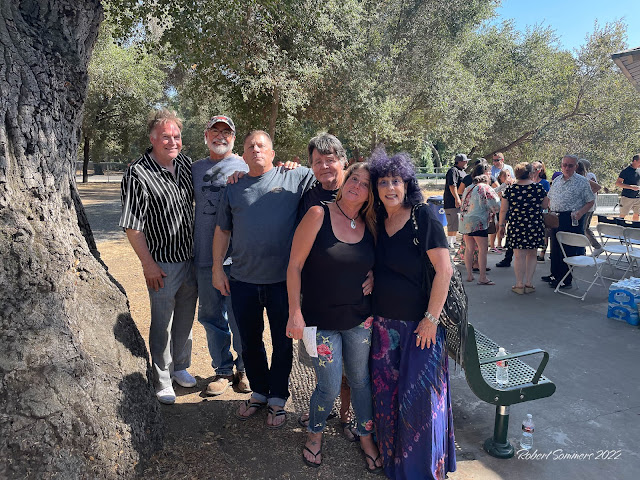 A lot of old friends showed up today, definite slice of old Fallbrook, Dave, Tony, Brett, Pecore, Allie, the Greek, Mohammed, Bobby, Kirk, Gena, Sue D., Laurie, so many others, all grieving the loss of Alan, a true brother and son of Fallbrook. Our condolences to Chistina, Leilani as well as brother James and his family. Christine, a native Hawaiian, performed a beautiful and poignant hula for her departed husband.
Vaya con dios!
*
A special thank you to RoxAnn Ratican for helping me run the auction, couldn't have done it without her, Saylor for putting me up, Feldman for the challah, Friedman for the occasional straight line and comedy patter, Dain for the hotel share and for putting up with my snores, David for the beautiful material.
Appreciate you all so very much.
Posted by Blue Heron at 5:47 PM

Whoa! What a trip. Mr. Toad's wild ride! Check in with yourself, breathe and take good care. Slow the whirlwind of activities. The weeds will die in winter. You deserve some well earned down time. Sorry for your recent loss.

Thanks for the great account of your trip. I always look forward to these year after year. I enjoyed the photos very much.

Hoping you have a chance to catch your breath and all news in the future will be GOOD.