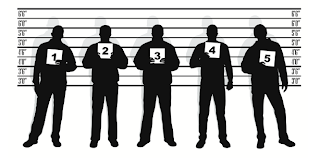 A wonderful article by John Wilkens in the Union Tribune, Can eyewitness testimony be trusted? A very interesting look at the structural inadequacies of Police lineups, known in the trade as six packs.


“Studies have shown that what a witness will do with a six-pack is pick the person who looks the closest to the one they saw,” said Jan Stiglitz, a professor at California Western School of Law in San Diego and co-director of the California Innocence Project based there.
“Then if they do a live lineup, the witness tends to identify the person not from the crime, but from the six-pack. And then the witness sees the guy in the courtroom, and each time that choice gets reaffirmed. So when it comes to trial, the witness is absolutely certain that the defendant is the person they saw.”

[Consider] ...Uriah Courtney, a 25-year-old construction worker from North Park. His picture was put in a photo lineup and the victim, although not completely sure, picked him out. So did another witness.Courtney was arrested. The main evidence against him at trial was the eyewitness testimony. He was convicted of kidnapping and rape and sentenced to life. He told the victim in court he didn’t do it and said he hoped the truth would one day come out.

It has. Recent DNA testing on the victim’s clothing cleared Courtney and pointed to a felon who lived about three miles away from where the attack occurred. Charges were dismissed and Courtney freed from prison after serving eight years.In the Courtney case, when the victim picked him out of the photo lineup, she said she was 70 percent sure he was the rapist, according to Alissa Bjerkhoel, his Innocence Project attorney. At the trial, the victim was 100 percent certain. She said seeing him in person made her more confident.

This is not new. San Diego County was an initial participant in the groundbreaking study that proved the need for better practices in this regard.


The San Diego Police Department is among four departments in major U.S. cities included in a study of how police lineups are used to identify suspects. The study reveals that 18 percent of the time, the eyewitness incorrectly identifies the suspect when a photo array is used compared to only 12 percent when lineup photos are shown one by one.

San Diego County needs to shift to double blind sequential line ups. Are they smart enough to? Do you think that they care one way or another?
Posted by Blue Heron at 3:25 PM

Come on - of course they care! For a continual source of of victims to feed the parasites of the criminal in-justice system...