It would be a stretch to call him a close friend or perhaps even a friend at all. He was a client that liked to come by the gallery from time to time and talk about art. He was very conservative, supposedly harbored some racist inclinations and would comment on this blog on occasion. His artistic taste tended to stop with Corot and maybe the Hudson River School, definitely not much further than the late 19th century.

He is and was certainly an intelligent man, an ex attorney I believe, but I don't feel the need to give you the full blown expose so we will stop the bio stuff right here. There is hopefully a point to this somewhere.

Suffice it to say that one day in passing he said that he would never speak to me again, without furnishing any reason for the cessation. I cocked an eyebrow and took it in stride, some people just aren't worth the time and energy involved in maintaining a relationship.

I was talking to the framer up the street one day about this fellow, who we will call "Z" and mentioned in passing that I could never figure out the sudden animus.

This sort of floored me. I never realized that I was part of the art killing conspiracy but I guess that I had been. Z had a hatred for modern art and abstraction and I was the closest target. Oh well.

*
I bring this up because of the interesting Atlantic article on Hitler that I linked to the other day, Edward Delman's Understanding Hitler's antisemitism. The article is a review of Timothy Snyder's  new book—Black Earth: The Holocaust as History and Warning. Delman interviews Snyder and I was intrigued by this snippet:


Edward Delman: In your book, you offer a portrait of Hitler as a brilliant tactician, but one who operated on the basis of a truly warped worldview based around racial struggle. Just so we can lay the framework: What would you say were the basic principles of Hitler’s worldview, and what did that mean for how he viewed the idea of nation-states, or ethics, and other universalist principles we assume as given?

Timothy Snyder: So what Hitler does is he inverts; he reverses the whole way we think about ethics, and for that matter the whole way we think about science. What Hitler says is that abstract thought—whether it’s normative or whether it’s scientific—is inherently Jewish. There is in fact no way of thinking about the world, says Hitler, which allows us to see human beings as human beings. Any idea which allows us to see each other as human beings—whether it’s a social contract; whether it’s a legal contract; whether it’s working-class solidarity; whether it’s Christianity—all these ideas come from Jews. And so for people to be people, for people to return to their essence, for them to represent their race, as Hitler sees things, you have to strip away all those ideas. And the only way to strip away all those ideas is to eradicate the Jews. And if you eradicate the Jews, then the world snaps back into what Hitler sees as its primeval, correct state: Races struggles against each other, kill each other, starve each other to death, and try and take land.

This is an interesting thought. Is abstract thinking an inherently Jewish process as this author postulates that Hitler believed? I am not sure, will need to do some research and pondering. I was mulling the question over this morning and thinking about the leading abstract artists, many of whom were gentiles, including the cubists Picasso, Braque, Gorky and Gris. Now of course I am conflating abstract thinking with abstract construction but please allow me the leap for the sake of conversation.

Some of the impressionists were Jewish, Pisarro's father was. Not sure if Z's ire stretched back to the impressionists and if that genre is rightly even termed abstract? Certainly Man Ray, Lucien Freud, Max Lieberman, Chagall, Soutine, Gottlieb, all of these outside of the box artists were M.O.T..

The later abstract expressionists were heavily Jewish, Rothko, Frankenthaler, Modigliani, Olitsky, Barnett Newmann, Krasner, Chicago, but many were not, Motherwell, Pollack, DeKooning, Thiebaud and Diebenkorn to name but a few.

So I think one should not make a statement that the Jewish people were uniquely responsible for producing abstraction. But where their numbers are incredibly disproportionate are as patrons. For perceiving the change.

One need look no farther than the salons of the Arensbergs, Stieglitz and Peggy Guggenheim to see that they were often the early tastemakers, buying art and cultivating nascent and sometimes starving artists that the rest of the public often took decades longer to appreciate and accept.

Hitler hated die bruck, what he considered the degenerate art of his day, it is interesting to note that much of the art stolen by the nazis which ended up cached or in museums was stolen from jewish families. But what should also be noted is that many of them bought the art when it was essentially valueless at the time, because they saw something in it before others did. So perhaps, on this one issue, Hitler was right, it is possible that the jewish brain does have an ability to see things in the abstract that others do not or did not.

Abstraction has always represented a threat to the representationalists, not that one mode of thinking is more superior in any way than the other. I see value in both approaches but tend towards the classic and would prefer to own a Rembrandt over a Picasso if I ever had the chance.

The late doctor and writer Leonard Shlain believed that sculptors and artists got the message before the scientists. He also believed that there were commensurate differences in brain physiology that explained the differences between linear and abstract thinking and conceptualizing. I was lucky enough to meet the man and attend one of his lectures. If you have an interest in the subject visit this link - Art and Physics- parallel visions in space, time and light. His other books are equally good and thought provoking.


"Because the erosion of images by words occurs at such an early age, we forget that in order to learn something radically new, we need first to imagine it. "Imagine" literally means to "make an image." Witness the expressions we use when struggling with a new idea: "I can't picture it," "Let me make a mental model," and "I am trying to envision it." If, as I propose, this function of imagination, so crucial to the development of an infant, is also present in the civilization at large, who then creates the new images that precede abstract ideas and descriptive language? It is the artist. In the following pages I shall demonstrate how revolutionary art can be understood as the preverbal stage of a civilization first contending with a major change in its perception of the world. In order to elaborate this thesis, I shall examine art, not only as an aesthetic that can be pleasing to the eye but, as a Distant Early Warning system of the collective thinking of a society. Visionary art alerts the other members that a conceptual shift is about to occur in the thought system used to perceive the world. John Russell, the art critic, says: "There is in art a clairvoyance for which we have not yet found a name, and still less an explanation." Leonard Shlain - Art and Physics 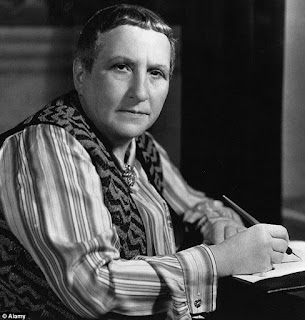 I will never forget seeing the Gertrude Stein exhibit at the Jewish Contemporary Museum with Steve several years ago and its powerful impact on me. They had the majority of her books opened up and the words jumped off the page and bit me most powerfully and viscerally.

I was physically shaken. I have written for a long time and had never seen words used like this before. Truly revolutionary, Stein. Pick up a first edition someday and see if you can get a sense of what I am talking about.

This abstraction business is an interesting topic to consider. Would love to hear your thoughts on the subject.

This is a very interesting article for many reasons. The concept of art as an early indicator, envisioning the future is described in a way that is new to me. You are in the zone Robert.

Thanks Wick. I guess art can be the canary in the coal mine.

What a fascinating blog. I am going to order Shlain's book. You are a smart man Robert Sommers.

I certainly agree with the last part, Paul. Thank you.

I read you most thoughtful discussion and I sure don't see the connection with the artists. Some of us feel non objective art has become a commodity like sugar beans or oil.
Maybe he knows Jew dealers in that end of the NY market? Too bad for him. I try to work my side of the street and let everybody work theirs…it's so much easier!

Funny you say that _ about working your side of the street as this guy has been in the program for a long time. I think he is talking historically, that it was the jewish people in the 1920's that opened this terrible abstract pandoras box to the world. Appreciate your input!

Hitler may have been thinking of abstract thinkers more than abstract expressionists; more about Karl Marx less about Marc Chagall

Hiltler was about abstract philosophy vs. concrete philosophy; physics vs. metaphysics; physical strength vs. intellectual prowess; law of the jungle vs. cooperation; capitalism vs. communism.

I believe, and pointed out, that there is a confluence between the process of creating abstract art and abstract thinking.