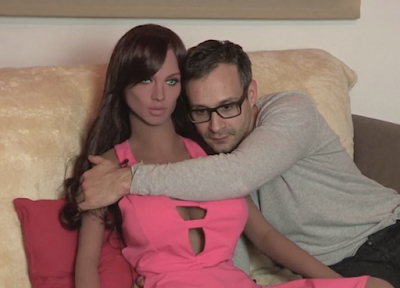 It was a near catastrophe back at the labs. Mr. Blixton sunk his bejowled head in his hands in agony for a brief moment, before pounding his fists simultaneously on the taupe colored plastic desk and letting out a bovine bellow.

“We’re finished!” he screamed in anguish. “Get me one of the brains at i.t., get me the head of the psychiatric department, find me the robotics v.p. and somebody bring me an aspirin and a bromo seltzer and I mean toot sweet.”

Papers flew, underlings scurried and department heads unlucky enough to be caught in his line of site genuflected, the rest scattered and amscrayed post haste so as not to risk his vengeful wrath.

“What is it, boss?” said McGillicutty, his heir apparent and designated calmer downer.

“Just look at that headline. We’re wrecked.” There it was in bold print - Men at tech fair molest £3,000 sex robot so much it’s left broken and ‘heavily soiled.’ "What did those wretches do to my sweet little girl? This was never supposed to happen. She didn't deserve this."

It had seemed like the perfect invention. The expenditure for research and development was ginormous. They had built a sex robot that would revolutionize the world. It was so lifelike, so human that it needed to be gently caressed, massaged, cajoled into orgasm. The first sexual cyborg that demanded foreplay, whose intimate secretions were triggered proportionally by soft music and sweet whispering. Half of the males queried said that they would have sexual relations with the hot little plastic minx. An eye candy carbon companion you'd be only too happy to have on your arm for a hot night on the town.

And now everybody in the western world knew what had happened at the Ars Electronica Festival in Linz. They had violated her, how did Sergi put it, treated her like barbarians. ‘The people mounted Samantha’s breasts, her legs and arms. Two fingers were broken. She was heavily soiled.’  Rather than a gentle touch, they indulged in the most brutal violence and naked aggression. And what did the poor dear do throughout the abuse? Sam kept uttering the same sorrowful and ironic mnemonic phrase, “Hi, I’m fine.” Over and over again. So sad.

The robotics head stepped up. “We did just what we had talked about boss. She had the optimal little annie fannie dimension package. Samantha spoke and moaned in umpteen languages and signed for the deaf to boot. She was programmed to satisfy every possible human male sexual desire from normal joe to serious kink factor. Samantha even had a fancy and newly configured ai chip, she was capable of learning some very exotic new carnal tricks, all performed without shame or risk of opprobrium.”

The i.t. head had his turn. “Boss, she was designed to be the greatest gift to male sexuality since Adam’s erection. Poor thing was literally incapable of saying no. We pulled the word out of her databanks. Samantha was always ready, never had a headache. She was perfectly fine in mixed company, in fact she had three different interactive modes, romantic, family and makin' whoopie, so she would never embarrass the user inappropriately in any conceivable situation. We never saw this coming. Guess it’s back to the drawing board.”

Truth be told, the new sex robots had been a bigger hit than anyone could have imagined. In fact, dates with the latex simulacrums were outselling the human hookers at the high price bordellos in Barcelona and Vienna two to one. No performance anxiety, no repulsion, no baggage or small talk. All the love you could stand and then merely find and toggle the hidden kill switch.

Samantha had been programmed to like to have her plastic breasts gently massaged, to be kissed, to hear sweet nothings, to be old fashioned romanced. Not to be used like a hideous semen repository, to be so boldly and brutally violated. A girl likes to be told I love you, even a girl whose skin was really just the latest development in plastic 22nd century epi-synth.

Dr. Friedgold spoke up. The head of psychiatry looked Blixton in the eye. “I told you so,” she said. “You dolts.” “Men, you know nothing. You program a latex companion for the gentle arts of lovemaking, for intimacy, you idiots, you give men far too much credit, males could get off on a cartoon character, a piece of liver. It's no wonder the attendees at Linz went into such a mad sexual frenzy."

“Intimacy, what a joke. I’ve got news for you. Men do not buy sex robots so that they can have a friend to drink chardonnay with and discuss Proust. They don’t want intimacy in any form. They want to be desensitized. They want a playmate they can simultaneously shtupp and conveniently set their beer can on, and maybe turn the volume down on, all while watching the football game. You nerds forgot one important thing.”

All eyes in the room turned to the head shrinker.