A Hezbollah spokesman puts his unique spin on the flotilla saga today.

"Israeli threats against women activists and journalists who are organizing new flotillas serve as proof of the immense fear the Zionists are living in," Hezbollah's Executive Council Chief Hashem Safieddine said Saturday. 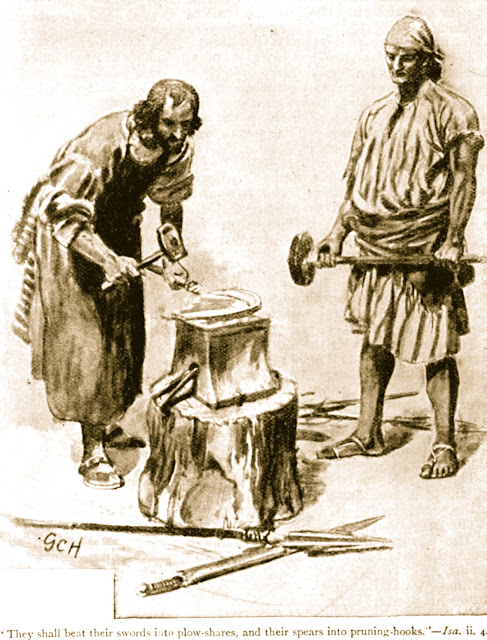 Israel "is terrified by a boat carrying women who want to deliver aid to Gaza. How will this Israel be able to face the rockets and the resistance bloc in the next confrontation? This is the Zionist entity in its current state and its deteriorating ability," he said.


It looks like they might have not received the message yet on beating their swords into plowshares. Maybe not quite time to let the doves out. Instead he talks about the "rockets and the next confrontation from the resistance bloc."

The pacifist left, arm and arm with the anti zionists and those who simply despise jews, have been beautifully co-opted in a classic gambit by the islamic terrorists who long for a global caliphate. Hamas and Hezbollah have as much genuine interest in peace as they have in donning teffilin and dancing a hora.

How many times does Ahmadinejad, Iran and their cohorts have to call for the destruction of Israel before the world takes them seriously? Will the "neutral" parties continue to aid and abet their newfound terrorist friends in the inevitable "next confrontation"? Here the Hezbollah spokesman clearly tries to goad Israel by characterizing them as weak. Anyone who has lived there, for a protracted period, as I have, will tell you that that is the currency of the middle east, weak or strong. It is unfortunate that the gilded age of Aquarius has not yet reached the shores of the middle east.

In the long run, you can either pick a side, or choose to wash your hands of the whole matter, it will be your own choice. I will not blame Israel when they choose survival. In this hand they are "all in."


Mavi Marmara Pep Squad meeting filmed in Turkey prior to the flotilla raid that killed 9 people.

Please remove me from your “Blue Heron” database and/or “mailout” list.

well, makes perfect sense-hezzie's wrote the book on how to treat women. An American Jew willing to be critical of Isreal.....SHAME ON YOU! What kind of a wing nut are you? Here, you are expected to be a nice Jewish Liberal, but when it comes to Israel, you are supposed to be a McCain Right Winger.
And you ask why I don't live here.....(by live, I mean it metaphorically.)
How come all your pals are ANON?
I sense yellow bastards! Just teasing.
S