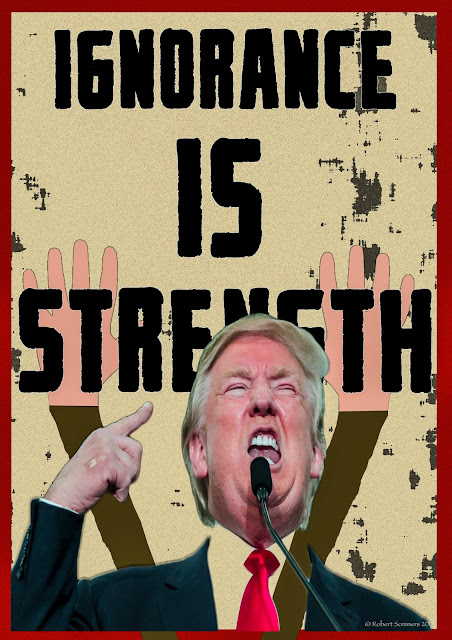 Lots of low hanging fruit but little time to write and all is mentioned and critiqued elsewhere, probably a hundred times better.

Just will touch on a couple things. Could the Orange one really be planning a pre christmas dismissal of Robert Mueller as the recent rumor mill suggests?

He has been trying desperately to gin up a biased FBI narrative to give himself cover.

Wouldn't put it past Trump. I thought Nixon set the nadir for Presidential cover and venality but Donald is giving him a real run for the evil crown.

Hope Mueller can put the dots together real quick, before he is destined for the dustbin.

*
The story of the CDC not allowing staffers to use the terms vulnerable, transgender, diversity, entitlement, fetus or science based or evidence based in budget documents is (as has been noted in a thousand columns) right out of Orwell.

But it follows on the heels of some similar Trump administration abominations that received less publicity.

Interior head Ryan Zinke reprimanded the Superintendent of Joshua Tree, David Smith, for mentioning the words Climate Change in a tweet. God forbid that the people on the ground at the Interior or EPA who actually know something about their jobs and our planet share their opinions.


And good old Scott Pruitt, bless his heinous soul, hired an outside contractor to scour the ranks for the past year in search of EPA employees who might have the dreaded Trump allergy.


Mr. Blutstein, in an interview, said he was taking aim at “resistance” figures in the federal government, adding that he hoped to discover whether they had done anything that might embarrass them or hurt their cause.
“I wondered if they were emailing critical things about the agency on government time and how frequently they were corresponding about this,” he said. “And did they do anything that would be useful for Republicans.”

Not to be outdone, the EPA has scrubbed the words Climate Change from its website.

Elsewhere, the Department of Health and Human services has recently removed information on LGBT people on its website and dropped questions regarding sexual orientation and gender identity from several surveys.

Orwell had it right. Control the language and it is pretty simple to control the muggles. Where's George Carlin when you need him?

Paul Ryan and Mitch McConnell both publicly scoffed at the notion of working in a bipartisan manner with Dems on Health Care and the Tax Cut. Now there are soliloquies of maybe working across the aisle on infrastructure. The less important stuff... If I was Schumer or Pelosi I would tell them to go pound sand.

The great thing of course is that they own this tax cut. When people figure out that the ACA mandate language will do in their insurance coverage the people (including the AARP) might just come hunting for scalps. The GOP will own the deficit and the added debt too since nary a single economist or CBO said that the prospective giveaway to the upper class would ever pencil out. Why do we have to go through this drill every time? Remember Clinton and Obama, having to clean up their mess?

Short memories. There is plenty of money floating around right now. Are wages going up? No way. It is a fantasy to expect some great new capital investment in this country. But the rich will certainly get richer.
Posted by Blue Heron at 3:46 PM