Hunter gets captured by the game 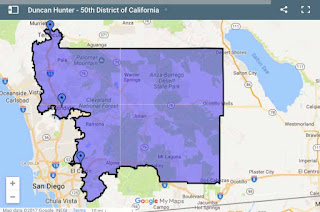 Rep. Duncan Hunter (R) and his wife Margaret, who may or may not be speaking at the moment after he threw her under the proverbial bus the other day, were recently indicted  by a Federal Grand Jury for purportedly misusing $250,000 in campaign funds. Hunter is my congressman in the 50th District.

Ain't going to mean a thing in my district. Even after all the hubbub, the brash party dude is up by 8 points according to recent polling. 77 % of the Republican majority in my district intend to vote for him again. Presumably he can handle his office affairs while in prison.

The 50th district is based in San Diego County. It includes suburban and outlying areas of the county, including Fallbrook, San Marcos, Valley Center, Ramona, Escondido, Santee, Lakeside, parts of El Cajon and mountain and desert areas stretching east to the Imperial County line. It extends slightly into southwestern Riverside County in the Temecula area. Broke 54.6 – 39.6% for the Donald in the last election.

Guy could commit a homicidal act against cub scouts in full public view in a circus tent and the yayhoos in Ramona would still re-elect him, especially when he's going up against a guy with a foreign sounding name.
Posted by Blue Heron at 5:35 PM