Your chance to buy a dandy cow. 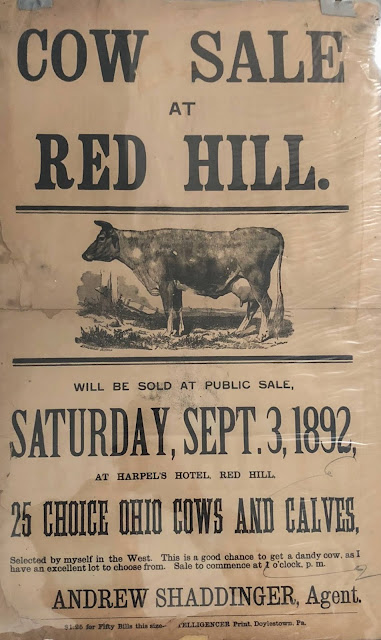 A young man brought a passel of old circus posters over a few weeks ago. Nothing really piqued my interest in the batch, nothing but this old drover's poster.

It is probably one of the earliest American posters I have had. Looked up everything I could about the broadside, and for your information Red Hill is in Bucks County, PA.

Harpel's Hotel was erected in 1870. The name of the town of Red Hill was apparently changed to Ottsville somewhere along the line. 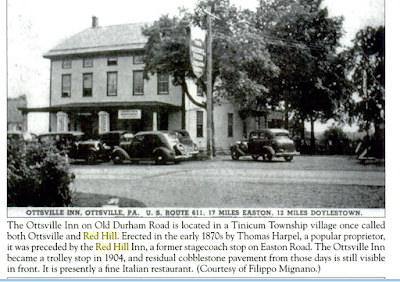 Andrew Shaddinger was or had been a partner in a mercantile with his brother in law John Walter.

Shaddinger had a farm on the corner of River and Dunham Streets which an old log church from the seventeenth century composed of scots and irish. There was an eventual  division between the two groups and the scots were dubbed the "seceders."

Here is a picture of Shaddinger and family at his family home in 1880. 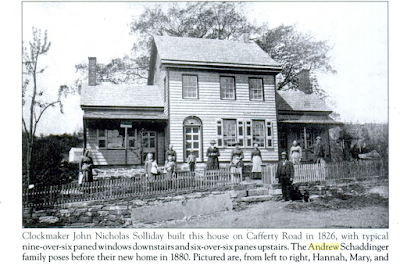 Found some genealogy on the man:

Andrew Shaddinger, the grandfather of Hannah G. Shaddinger, was born in Bucks County and continued a resident thereof until his death. He was a farmer and drover, dealing in stock and carrying on general agricultural pursuits throughout his entire life.

*
I was woken up to a gunshot at 5:13 this morning. Actually I was already up, laying down on the couch, planning my day. Strange to hear one muffled shot so early.  What was going on ? I had not heard any coyotes. Should I go outside and investigate?

When I drove to work an hour later I figured it all out. The neighbor had a fellow come over and shoot their steer. Bolt gun to the head. I drove by and he had barricades around the fallen animal, ready to hoist him up to the flatbed.

I wasn't exactly friends with the cow, there have been after all a succession, but you get used to seeing him in the pen and then one day, blammo.  I dig that beef doesn't mysteriously appear in a supermarket like some immaculate bovine conception but it is still weird to raise critters to kill.

We did it one time with a goat and when it came time to meet its maker, neither of us could ultimately eat a bite. Guess that we wen't hungry enough.

If I thought very hard about where our meat comes from, I would be a vegetarian!

better not think about it...