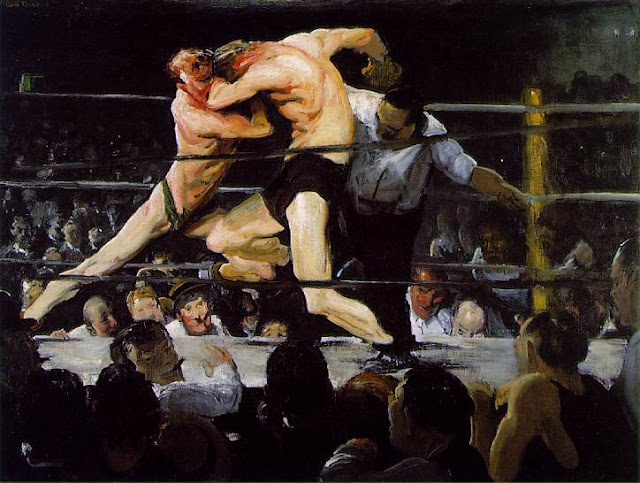 
It was strictly SRO at the pugilistic squared circle in heaven. And as usual, gods being gods, there were the normal locker room shenanigans taking place throughout the joint.

Krishna was drunk and chasing women around the turnbuckles while Buddha and Bacchus made short work of the appetizer and dessert platters. That old bore Hercules was begging anyone who would listen to feel his gigantic bicep whilst Allah and Wakan Tanka were engaged in a spirited game of "arabs and indians."

The chatter grew louder and the mood and apprehension thicker as I squirmed my way through a group of lesser immortals and found the way to my coveted ring side seat.

"Who's on the card tonight?" I asked the fellow on my right, a tall bearded chap from Asgard.

"Shiva the destroyer. You know, the guy with the dreadlocks and blue neck. Nasty dude with the trident. Undefeated."

"The little guy over there with the sandals. Name of Jesus. Doesn't look like much but, I tell you he's a scrapper. Might be worth putting a few drachmas down. Homedog and all that.

Just then we heard a big commotion. They were carding at the entrance and apparently a little brouhaha was taking place between the inhabitants of planets Kolob and Xenu, both having been denied admission. Those "new" religions were still considered somewhat gauche by the heavenly throngs who turned an upturned nose at the celestial nouveau riche.  Diana and Kali went to investigate, and things quieted down fast, since the two of them broads shrieking and screaming could take down any army.

The bout started and it was a fairly typical affair, with both opponents feeling each other out at first. A third eye stare down from the destroyer. Jesus threw a couple of nice straight right hands, Shiva spat out a blast or two from his pitchfork that singed Jesus's beautiful curly locks. The grizzled ref, a lesser known god from some long dead pre-sumerian theology, had to step in and caution the pair to quit the dancing and spouting of parables and fight.

I hate to sound xenophobic, but that little fella from Nazareth made short work of the vedic warrior in the third round. He feinted a jab and went for an ankle grab on Shiva. Got the takedown and the submission. Shiva had some nasty things to say afterwards but the winner forgave him, being that kind of guy. I guess when you are the top god and are willing to take on all comers, you can afford to be a little magnanimous.

Next month Ahura Mazda, the Zoroastrian Fire God, is scheduled to fight Ra and it should be quite the throwdown. It might be heaven, as they say, but you're in for one hell of a fight.