Lord of the Western Marches 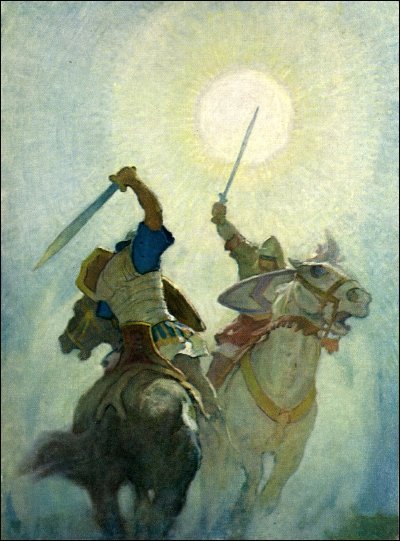 His name was Peter and his forces were vast. The reaches of his cyberfleet stretched all the way from the Kleinrock Ridge to the silicon shores of Langley herself. He harnessed a gigantic bot army of slave drives with the raw computational power of hundreds of thousands of terrabites, charging the ionized air between his fingertips and the mouse pad like a lightning storm. In the land that exists in the ethers of cyberspace, his authority was unchallenged. Lord of the Western Marches, Emperor of the Seventh Ray, supposedly the wealthiest man in the entire virtual realm.

Peter leaned back in his swivel chair and appraised his domain. He had a momentary upwelling of pride regarding the spoils and casualty count of his daily conquest. He felt the bristles on his chin and casually wondered just how many days it had been since he had shaved or bathed? Not that it mattered.


He had distilled his need for tangible human companionship to the bare minimum. The delivery man had instructions to leave the pizza on the top step and to remove the crisp fiver from underneath the coffee can that doubled as an ashtray. He was surviving fine, thank you. He allowed himself a quick and familiar glance at his credit screen and saw that his net worth had near doubled in a single playing session. His virtual currency bank was now dangerously close to toppling the whole online gaming cybersphere.

His family would check on him periodically but he had alienated them once too often by pretending to be away when they arrived and they finally got the message and stopped trying. He didn't need to hear it. They didn't understand, nobody understood. When he was employed he was just another fat security guard in front of an aging supermarket, enduring the insults of rude skateboarders and drunken illegals.

But in the SymGaia™ world he held a position that was close to godhood, he was a legend from Bay Ridge to East Palo Alto, and the pull of the physical universe grew weaker by the day. SymGaia™ gamers had unfortunately made the news quite often lately, that stupid mother who let her poor kid almost starve to death so that she could play 20 hours a day. Or the idiot couple who were caught breaking into the house to steal swollen sdcards filled with virtual swag.

These people were amateurs. He watched them move clumsily through his universe, licking his lips at the prospect of smashing through their stupid avatars and sending them hurtling back to who knows where. He was the first to have twin t1 lines hooked up to his apartment, but that piddly speed and bandwidth now paled in 2010 with the raw stream of the cable company's ordinary information pipe. Any foolish pretenders to his throne would meet with a fast and fatal end.

Peter surveyed his one bedroom apartment. There was a bedroom, back there somewhere, but he had long since given it up, preferring to grab the limited amount of sleep a person of his virtual stature and responsibility required on the couch. It was an ochre colored affair, charitably left by the previous tenant, and its cushions were loaded with pennies, very vintage  popcorn and the occasional old ballpoint pen.

His computer was set up on the surfboard shaped black coffee table in front of the couch. A couple of pay or vacate notices lay unopened on the table's surface. Like many a young man out of high school, all of his furniture was black, and it had all seen better days. Black might have been the color of choice for secret agents but it was a bad choice for mixing with dirty white shag carpeting and the laminates were now chipped and peeling on nearly every piece. The only artwork was an old Maxell poster tacked to the wall that showed a long haired youth sitting in a chair getting whiplash from the extra high velocity speaker system.

The kitchen, if you can call a sink piled high with dishes festooned with undetermined penicillin strains and a toaster oven a kitchen, would have been definitely classified a biohazard if brought to the attention of the proper authorities. He had long since disabled his icamera, pointing it at the ratty drywall with the orange peel texture. It was nobody's business how he looked or how he lived and there were certain trade secrets to protect.

He heard the telephone ring and he jumped. "Who in god's name could be calling at this hour" he mused as he scrambled for the plastic receiver. He pushed the pale yellow blinds up and saw the bright sun high in the midday sun. Oh shit, he squinted, it was already one o'clock.

"Peter Bennett, this is Mr. Blakely from the unemployment office. You were supposed to be here two hours ago, Peter. Is there a problem?" The voice was audibly aggrieved.

"Oh, no sir, no problem," he stammered. " I think I may have caught a touch of that H1N1 business," he said with a nervous cough, "and I just thought it would be better to keep you all from harm's way. Of course I've been looking for work. I understand. Yes. This is the last month. Goodbye." He clicked the receiver down with a sense of relief at being freed from human contact. He could not remember the last time he had actually heard a human voice.

Peter walked up to his old fridge and grabbed the month old container of chocolate milk, first testing it with a cautious sniff. He took a swig and sat back down on the chair.

He woke his stalwart steed up from sleep mode and flexed his fingers a few times, before they found their familiar positions on the trusty gaming controller. The adrenalin seemed to course back into his veins. The lord of cyberspace threw back his head and laughed at the puny mortals.

His name was Peter and his forces were vast...