Leslie and I got up at three thirty in the morning on Sunday and went to Pasadena for the Rose Bowl Flea Market.  We hardly ever get up there anymore, but cut our teeth in the trade there and at Long Beach Vets.

I was not there ten minutes when in the early morning light I espied this beautiful lady leaning against a car. I didn't even haggle, I was so entranced with the competence of this luminous portrait. As I carried it to my car, people kept stopping me and commenting on the quality and beauty of the work. 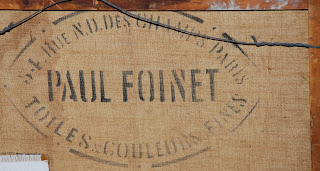 It is rare for me to find a portrait painted this well. I have had maybe two or three others, two of them unsigned. When you get a painting like this, having a signature is secondary, at least to me. From the idiosynchratic style, I knew instantly that it was painted at Academie Julian in Paris and later research proved me right. The Parisian markings on the canvas also bore witness to it's continental roots. 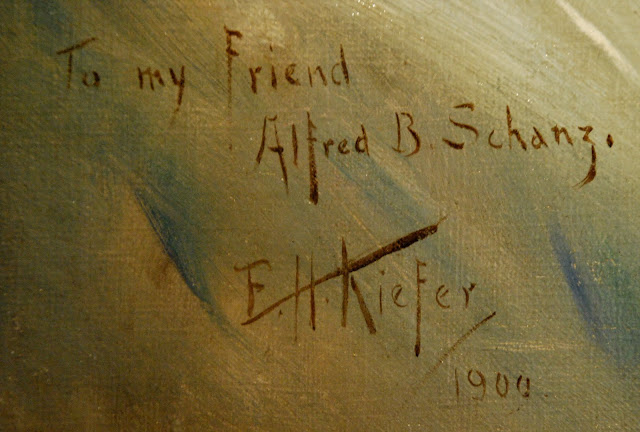 This painting is signed. It was painted by E.H. Kiefer, a Michigan man, who studied at the Academie. In the lower left quadrant is painted To my friend Alfred B. Schanz, E.H. Kiefer/ 1900.

One of the many wonderful aspects to my job is that art and antiques open up a window to history, and I have always been interested in our past. Dealers and collectors climb through narrow wormholes in time and learn about the past through these often beautiful relics.

So I started doing a little research on this particular artist, Mr. Kiefer. I found out that he was born in 1860 and died in 1931. He was forty when he painted this canvas, perhaps in the artistic prime of his life.

From Askart.com: Born in Port Huron, Michigan, Edwin Kiefer settled in Detroit and also spent much time in Paris, France. He studied at the Berlin School of Design and from 1895 to 1896 was a student of Jean Paul Laurens and Benjamin Constant at the Academie Julian in Paris.

In 1897-1898, he exhibited with at the Paris Salon and at the Chicago Art Institute and in 1913 at the Detroit Institute of Arts.

Kiefer was the son of Dr. Herman Kiefer, Detroit, and educated in the Detroit Public Schools, Berlin School of Design, and under Constant Cazin and Laurens.

He was typical of many American artists who, around the turn of the 20th century, were disenchanted with artistic climate in the United States, and sought aspiration in Paris, France, then the art center of the world. There he enrolled as a student in Academie Julian.

Kiefer was a very versatile artist, doing figures, landscapes, still lifes, and genre subjects with equal ability. He eventually became Chairman of the Board of the Port Huron Paper Company, and was an avid sailor, primarily of 30 Square Meters. He exhibited at the Detroit Institute of Arts, Chicago Art Institute, and the Paris Salon.
He was taught at the Academie and was also a student of Constant and Laurens, the greatest teachers of portrait painting of their time. Their students had a most credible way of painting figures. I also found a citation from the 1898 issue of Brush and Pencil that I can not fully access on JSTOR announcing his return from Europe. Did he paint this portrait during his tenure there and dedicate it two years later?

Here is a picture of another great painting that I sold about fifteen years ago that also had an Academie Julian sticker on verso. 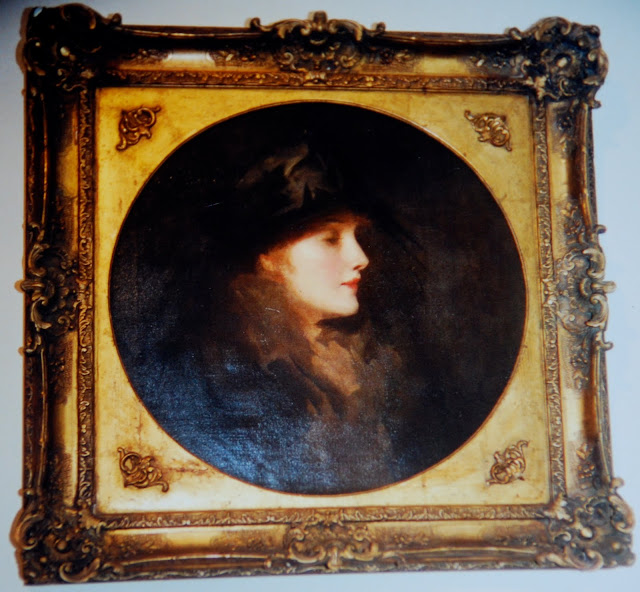 So Keifer was a very successful business man as well as a yachtsman and talented artist, the Port Huron Paper Company apparently being some great shakes. Perhaps he had family money, the son of a Doctor who could at least afford to send his son off to Europe for his studies. In art, no less.

A rare man who didn't have to rely on selling canvases to make a living and could afford to gift them to his friends. Only two of his pieces are reported as to ever being sold at auction. Yet a facility with a brush that can neither be faked nor achieved by mere "happy accident." 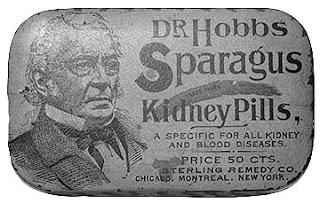 I decided to google Schanz, the intended recipient of the work. He also had interesting returns, having been on Frank Leslie's Yukon Gold Mining Expedition in 1890 and 1891. Schanz was the Secretary of the Sterling Remedy Co. of Chicago and New York. He is discussed in this article on Alaskan history as being an early explorer of Alaska and in this old book about the Yukon's pioneers. I even found and read some of his letters held in the Library of Congress.
We will never know if the portrait's model had a connection to Schanz, although it is doubtful, since the painting was probably painted in France.
I am happy that I will get to spend time with this lovely beauty and hope that you will stop by the gallery for a look. Needs a bit of restoration but then the old girl shall be looking quite radiant. I look forward to sharing her with you. I hope that you appreciate her charms as much as I do. 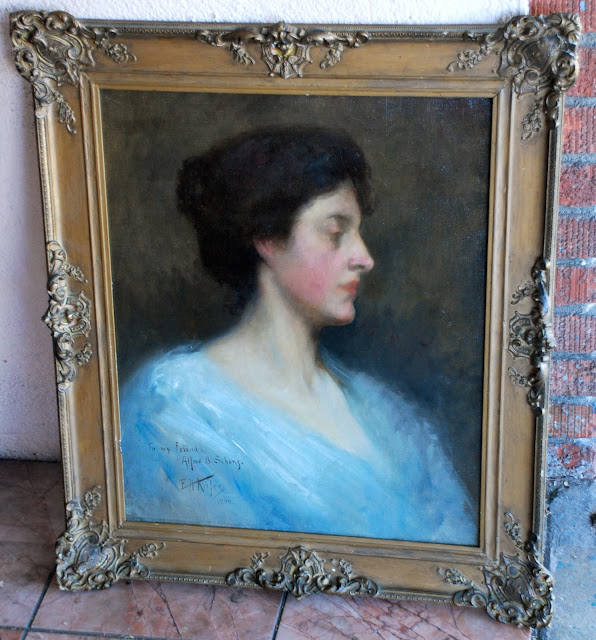 wow, talk about a score; the blue of her dress is astonishing; mi abuelo Will studied with Constant and Lefevre also, at AJ...

WOW!
That is some story. I can bet, this is why you do what you do....the thrill of finding a piece like this. Since I am not a dealer, just curious to know if the person selling the painting had any idea what he/she had? This is fascinating. Thanks for sharing. It is a beautiful painting, too. How can you part with it? Guess a good dealer has to be able to draw a line in the sand, right?
Best,
Stan

Hi Robert,
I really enjoyed the 'lady' and the article. Isn't it fun to go through the 'wormhole' on something interesting!
Marlene

Good find. I take it that Leslie is not jealous of all the affection that you show your new lady.

Hi Robert,
Loved the blog story about the Rose portrait - beautiful painting and I always look for your "Roadshow" updates in the blog. Gives me vicarious pleasure sitting here in my Santa Barbara hideaway.

Art is so subjective Stan. I don't know if the person who sold it had an inkling of the quality. Unfortunately many of the people that are selling paintings these days would be more suited to selling potatoes or widgets, there is a by the pound or square inch mentality in a significant segment of the art dealing populace. I have gotten by by trusting my own eye. I have to keep some things I believe in a long time.

I have been doing research on e h kiefer since I own an original painting that is in near perfect condition. Your posted info was informative. If anyone with value knowledge ever reads this could you contact me? myxpykalix@hotmail.com

The artist is my 3x's great uncle and I'm wondering if you can point me to any archives/resources regarding his other works. specifically I'm trying to locate an image of the life-sized portrait he painted of his father Dr. Herman Kiefer, one of the founders of the U of Michigan's medical school. The painting once hung in the student lounge of the school and my father it there in the late 80's. It sits in a wearhouse now and the person in charge of the school's archives has been unresponsive.Ideas? Resources?
Thank you very much,Katrina
PS Awesome score on the painting.