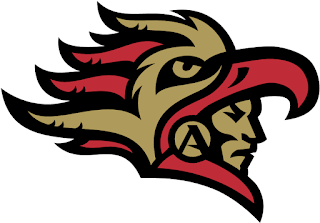 Alabama is beating previously undefeated Auburn like a drum tonight.

That means that out of 350 teams playing Division 1 basketball, only one team is now currently undefeated, the mighty San Diego State University Aztecs, which happens to be the school I attended and received my credential from.

The Aztecs are 18-0. They are a veteran team, filled with great shooters and sparked by Washington State transfer Malachi Flynn, who is having an All-American season.

Their post player is a man from New Zealand named Yanni Wetzel, who grew up playing tennis and has wonderful footwork. The other big man, Nathan Mensah, has been awol with a respiratory condition for weeks so the team has been playing a lot of three and four guard sets with super sub Matt Mitchell, who has slimmed down a lot from last year. Their coach, Brian Dutcher, is in serious consideration for Coach of the Year.

I am looking for my Aztecs to go deep in the NCAA tournament in March.
Posted by Blue Heron at 8:19 PM