The valley is getting a lot more hawkish of late. I have a caterwauling coopers hawk regularly buzzing my feeder and creating havoc amongst the poor doves in my front yard.

The shriek of a Coopers is high pitched and has an unmatched decibel level compared to the other buteos.

Red tailed and red shouldered hawks are more visible around the valley too. The birds sense the advent of spring and they are getting ready. Time to nest.

Long time readers know that I spent eight years regularly photographing a red tailed nest perched on a high sycamore in my valley.

I literally took tens of thousands of shots. Two years ago the huge nest collapsed in a heavy wind and under its own weight and I was frankly despondent.

Yesterday I was driving out of the valley on the high canyon road when I noticed a new nest being built in another nearby sycamore, only one with an even closer vantage to the road. When I came back in later that evening I took a picture. The amount of work that the hawks put in and accomplished in a single day was astounding. 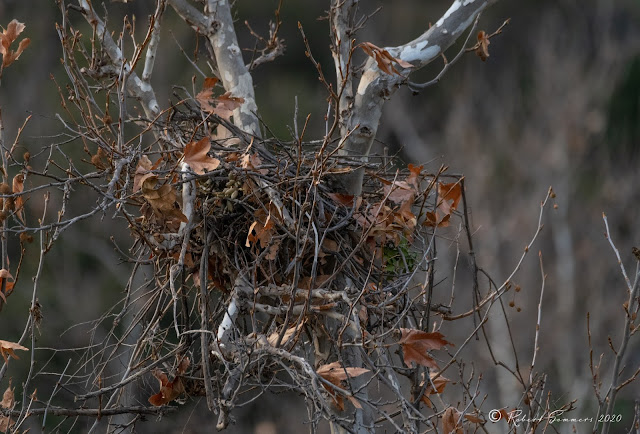 One has to wonder how these animals get so proficient at engineering, where they acquire the innate know how for such elegant and sturdy nest building? 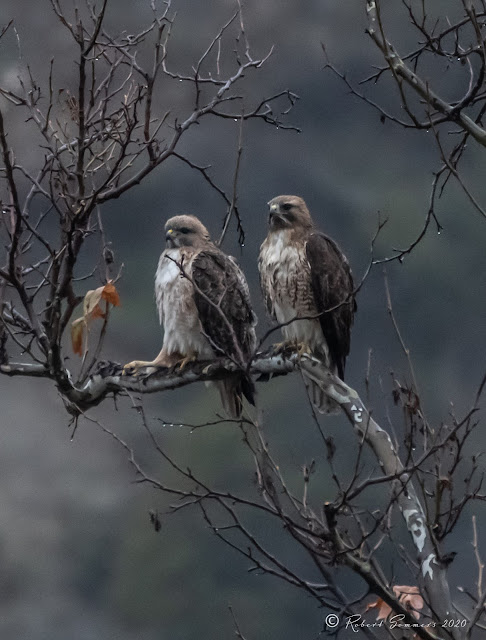 It was a nice slow and gentle rain last night. Leslie is visiting her brother in Dallas. I woke up from my solitary slumber to the Coopers carrying on.

As I backed the car down the driveway I noticed the mother and father hawks to be in another sycamore across the river that I could see from the end of my driveway.

An early morning low light shot with the slow lens but you get the idea. I will be better prepared in the future.

Got another call from a fellow Santa Margarita Valley dweller about a new hawk nest being built on his property a little west of me that I also have an invitation to shoot.

Should be a bang up spring. And falcon babies just a few months away too.
Posted by Blue Heron at 9:11 AM

Good news. Love the photo of the pair!

And so it begins, a sure harbinger of Spring. Blue Heron's annual chronicle of the Santa Margarita River Valley raptors. This year there's something very comforting about that. Thanks for being there Robert.