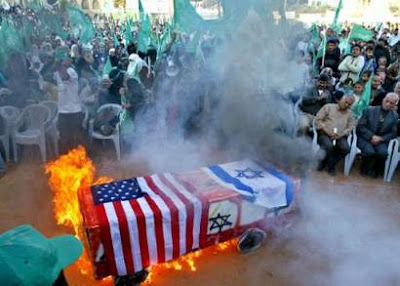 In a continuation of President Obama's new policy of engagement with our foes, news today that he is attempting to change the rules so that we must give the Palestinian Authority 840 million dollars, even if it falls under the control of Hamas. The Hamas that has repeatedly called for the destruction of Israel and death to the Jews. Pardon me if I am skeptical. This is an ill timed and an ill advised finesse. Similar in our way to the billions of dollars in aid we have foisted on Pakistan, which is clearly teetering.

The late Terrence McKenna postulated that the world as we know it would end in 2012. Way things are going, I don't know if I would take the bet or not.

I know what you are thinking. Freaking jews, they want to love the world to death until it's their ass on the fire. Mea Culpa.
Posted by Blue Heron at 6:55 PM

Our government is run by a black, a woman, a homosexual and Harry Reid.

Black, female, gay, mormon don't mean a thing to me but stupid certainly does.

this is why I don't read your blog anymore....where do you find these assholes?

ONE ARMED, GREEN, ASEXUAL MODERATE, LOVES SEX WITH OTHER ASEXUALS, BELIEVES IN ONLY ONE GOD, BUT MIGHT BE DOG....
LOOKING FOR ROOMMATE. POSSIBLE ROMANTIC CONNECTION, AND OR SHARED SPACE IN FRIDGE.
PACIFISTS, MOTHER LOVERS, GREENIES, BREEDERS, HALF BREEDS, HALF AND HALF LOVERS, STARBUCKERS, STARFUCKERS AND OR JEWS BLACKS SOCIALISTS, COMMIES, (UHHH WHAT IS A COMMUNIST, ANYWAY-I FORGOT), CUBAN NATIONALS, CATHOLICS OR MOOSLEMS, AND OR MEXICANS NEED NOT APPLY.

(AINT LIFE AN EVER EVOLVING GRAND HELL OF A TIME?)
PO BOX 27B
BOISE ID
ASK FOR PAT, CHRIS OR FRANKIE
ANONYMOUS, CIRCA 2009