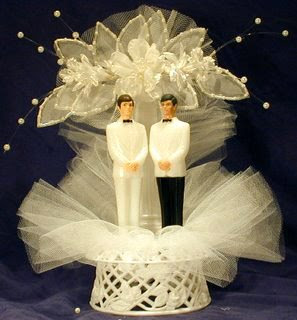 Miss California USA's perfect little nose is in a bit of a snit. Carrie Prejean thinks that she was jobbed from winning the Miss USA crown because of her somewhat parochial views on gay marriage. Now I don't know if the Miss USA judges used her personal views as criteria for demoting her or not - her answer was a bit awkward but not Miss Carolina from last year bad - but would like to use the occasion to throw my own tiara into the ring, as it were.
If you are against gay marriage, don't marry one. It's simple.  Why should another couple's pledge of fidelity and matrimony have any effect on your own vows and marriage?  If you want to pledge lifelong fealty to Elsie the Cow, it's your bag.
I think that all marriage should be outlawed. Well, that's a bit harsh, let me put it another way: Why not go back to just having civil unions for everyone?  No one gets sore then because society bestows exalted status on heterosexuals. Everyone gets the same legal rights of property, tax status, survivorship and death benefits.
If you feel the need to have your civil union sanctified in some temple or church, have at it, but it would just be window dressing really. I am really serious about this issue.  In this scenario, religious types wouldn't feel like they're views and personal edifices were being threatened. I often joke that gay people should have the right to be as miserable as the rest of us married folk but am kidding around.  I love and appreciate my wife and hope to be with her as long as she will have me.
But the arguments against gay marriage are so stupid and hateful.  Especially the one's that go like this:  Marriage is about the reproduction of the species and turkey basters aside, god doesn't have any use for two sockets or two male adaptors. First of all, last time I checked, the world had plenty people, more than enough, I'm afraid.  Secondly, the marriage as a continuation of the species argument is insulting to the many americans like my wife and I, who voluntarily chose not to have children.  Is our union any less valid than yours?
I think that in the end, it is the power of the church once again raising it's sometimes ugly head, refusing to accept gays with the same weak refutations it used to use when it characterized blacks or the children of Ham as eternally damned to be subhuman.  The same religious view that still treats women as property in large sections of the world.  Or maybe it's just repressed homophobes who are so afraid of their own secret attractions that they strike out with the lord's angry vengeance.
I hope that we will look back on this issue with wonder in a hundred years and ask ourselves why we stayed stupid so long?  Gay people have shown that they are as good as the rest of us in everything, including parenting.  Let's give them a break.  And forgive me for not being so tolerant of your intolerance.
Posted by Blue Heron at 3:46 PM

If Elsie is appropriate, whut's next? Hmmmmm?? Scooby Doo? The LINE has to be drawn sumwhere!! Four legged MIGHT be OK, but definitely not eight! And don't even start with those activists for transgendered millipedes! They already have offices on K street!

Always suspected you were latent. it is people like you who are tearing at the moral fiber of America. Don't use the sanctity of the internet to justify your liberal ideas about marriage, homosexuality or religion. If you can't handle marriage or are not certain about which sex you prefere then you should do your viewers a favor and refrain from being an authority about moral laws. One might be presumptuous that your audience is predomately gay but it still does not mean you should espouse the same rights to homosexuals as normal people.

Center right traditionalism??? Is that what we're fighting for Davey Crockett??

Did you two read a different post than I?