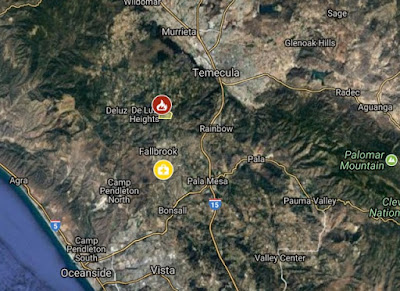 Yesterday was a big freakout. Got a mid afternoon call that there was a fire near Rock Mountain headed straight for my house. I left work a little early to deal with things.

Looking past Riverview the smoke clouds from the fire were huge and daunting. Called Pete who could see it from his house and he said there was a lot of air support.

Winds were pretty strong, I feared the worst. Got home, threw my heart medication in my toilet kit, grabbed some socks and underwear, a couple t-shirts and prepared for the worst.

Called all the neighbors to touch base. Julie was prepared to load her horses. The fire was right over the hill from me, right on the other side of Gavilan Mt. Very close as the crow flies. Called the Calfire number and they said it was headed our way, directly towards Red Mountain.

Located the cat cages and put their food and dishes in a bag. Huge number of planes making airdrops but all it would take was a spark flying over the hill in this wind.

The Union Tribune article said that the fire was stopped at 225 acres. We were very lucky. Many people were evacuated.

Got the word around seven that things appeared under control. We were supposed to go to dinner but I was too amped and freaked out to leave. As of this afternoon they are saying 25% contained but I think that is only hotspots.

I just saw that there was a major flare up today but it is well within the fire perimeter.

I have seen too many fires around here already and vividly remember Gavilan Mountain in flames in 1979 and 2007.

Glad this one was so expertly fought and controlled. Big thank you to all the fire people who put their lives on the line for us every day.

Glad that you, your neighbors and the animals are safe.