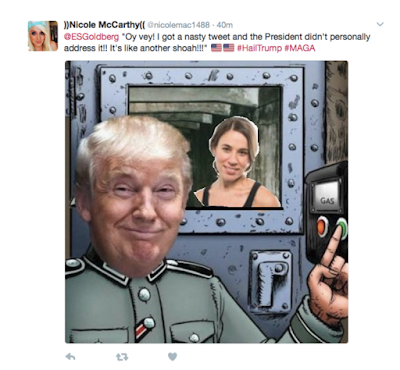 The country and world is fractured, beyond any point I could imagine it could ever break.

Irrespective of the length of tenure of the current resident of the White House, I think that the wounds, while not necessarily mortal, will take at least a generation to heal.

Our ugliest tendencies have been exposed to ourselves and the rest of the world. And to be fair, they predate Trump, we just thought that the more racist fissures had been somewhat resolved. Wrong.

I was pretty taken aback by the putrid level of bile in the hatemail that HuffPo receives that it recently published. This sort of stuff:

These are not the worst of them, by a long shot. I have many conservative friends, many of whom support Trump. I sent this link to one of them and got this comment back:

This is all part of the uncivil war. Maxine may get back what she wishes on others.

No condemnation of the vile vitriol, racism and anti-semitism. Dems have it coming. All is fair in blood and war because Maxine Waters wants to resist the President and his agenda. I don't see the equivalence, personally. While many of us might secretly wish some horrible dire end for certain members of the GOP, have you ever heard  liberals or progressives resorting to this sort of racist filth and demagoguery? Of course not, because it doesn't happen.

I know that the great majority of conservatives are not nazis or bigots. But I also see that very few repudiate the racist scumbags who have allied themselves to their cause. Like the guy who pulled the gun at the family rally in Huntsville yesterday, chanting whoop whoop and Vanilla Ice lyrics. Deranged conservative syndrome is spreading like an evil virus.

Trump isn't helping things. Do you notice the veiled threats of late? Be careful when you are messing with my base - they are stupid and they are armed.

“I hope the other side realizes that they better just take it easy,” Trump said on the Fox News’ program “Sunday Morning Features.” If you criticize him, he considers you a danger to this country.

Maybe he isn't a Nazi, maybe he is more like a Stalinist because Uncle Joe would love this sort of talk. Divide and conquer and throw the children in "summer camps."

Waters didn't threaten anybody with harm. She said that people should make Trumpers feel unwelcome. She has since been besieged with death threats. What kind of leader physically threatens congressional leaders and his political opposition?

I take my hat off to many good conservatives right now - George Will, Bill Krystol, Jeff Flake, Jennifer Rubin, Gerson, Brooks, Schmidt, Corker, the ones who had the balls to speak up. Not enough of them, frankly.
Posted by Blue Heron at 10:40 AM

'I take my hat off to many conservatives right now - George Will, Bill Krystol, Jeff Flake, Jennifer Rubin, Gerson, Brooks, Corker, the ones who had the balls to speak up. Not enough of them, frankly.'

I think there is more rock bottom to come. Who knows, possibly car tariffs. We have a situation where about 1/3 of the population is ruling the country (on behalf of about 0.1 percent). They will have their party until it backfires (like with car tariffs).

This giant overreach is probably going to produce a good backlash in November and hopefully bring about the beginnings of recovery. Since the rabid 1/3 of the country will no longer get their way and could become all pouty and sulky about it, it is better to have a slower electoral process to bring the recovery as it is difficult to cook up conspiracy theories about the whole electorate. The country needs to recover and it needs a way to remove power from the Republicans without destabilizing things too far.

It was worse in the 1960s but in this era our electronic media make the present seem worse.

How soon we forget the tolerance of Peter Fonda, Michelle Wolf, Samatha Bee, Kathy Griffin, Keith Olbermann, Antifa thugs or a foul mouth congressional intern. Hate, threats and stupidity comes in all flavors. No need to praise one and curse another, they’re all an embarrassment to civility and concourse. Just say’n.

I wonder if the Bernie Sanders supporter who tried to ‘kill’ unarmed republican lawmakers last year said any ‘bad words’ prior to starting his personal shooting gallery at the softball ballfield? I also don’t recall if any celebs threaten to blow up the White House or threaten president’s children when Demoncrates held the highest office? But today it’s totally super cool if your hip actor, comedian, news reader or disranged Bernie supporter shoots to kill or threaten harm on First Family members. I get it, and I’m sure John Wilkes Booth was the epitome of social grace and charm as he stepped into the presidential box that fateful evening.

By the way... Samatha Bee famously used that exact language in describing Ivanka Trump. But hey, that totally cool and all.

If memory serves, the Parkland shooter was photographed the day before in a MAGA hat. Really want to go there?