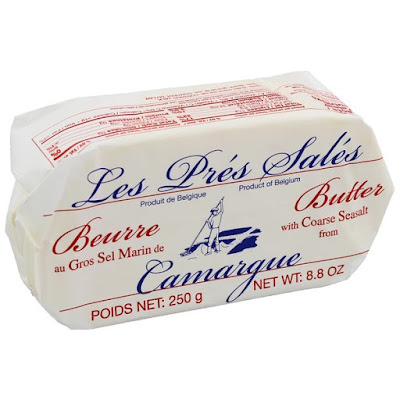 Leslie and I are simply addicted to this Belgian butter. We started using it about three years ago. Have never eaten any butter that can match its incomparable flavor set.

Well, maybe the stuff I hand churned myself in kindergarten came close but that was admittedly a long time ago.

We have tried pretty much all of the european butters and they are all mostly pretty good but nothing we have sampled comes even close to this one. Some nights all I need for dinner is a touch of Les Prés Salés on a piece of bread and I am exceedingly happy. 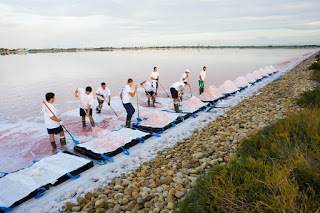 I think the secret might be in the Camargue sea salt, which is hand raked and harvested in France. Camargue is located in the Rhone delta and is known for the high quality of its salt. The butter itself comes from the fresh cream of very happy and healthy cows that live on the rugged plateau of the Belgian Ardennes.

The salt crystals stay intact and add a nice texture and bold savory flavor to the delicious spread. Leslie says that the butter has an underlying tang that makes it taste richer.

European butter has a slightly higher butterfat content, at least 82% and is often cultured. America, as one would expect, is mostly boorishly uncultured and has a butterfat content ceiling of 80%. Mediocrity. 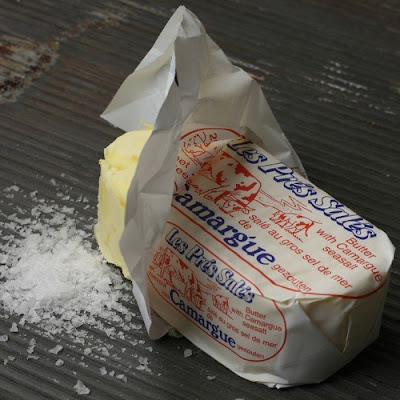 Unfortunately, our go to market, Fallbrook's Major Market, has run out of the salty sweet stuff. Haven't had it for six weeks and we just ran out of the last little bit we had been hoarding. (Ed: My wife said, now why exactly did we run out, Robert? Who's the chazer?)

I talked to a grocer yesterday and he said that they are indeed looking but may in fact never be able to get it back again.  I went on line and found a place back east that had it, will only cost twenty six dollars to ship plus the price of the butter. I don't think so.

If you see it anywhere locally, will you please let us know? Starting to feel like a butter junkie needing a fix...
Posted by Blue Heron at 11:04 AM

Costco sells Kerry butter from Ireland--very tasty.
I like the name.
KJ

Amish butter is amazing. Meet me in ABQ Aug 3-5 I’ll have Janine bring you a few pounds

Living in Cleveland. Not finding it anywhere in any of the stores. And there is no butter that'll match that Amish or otherwise. If someone knows of a location here in this area and that's Cleveland Ohio please contacted me. I hate to pay ridiculous prices for shipping. Email me at p69tus@yahoo.com

Wish I could help, Clevelander. The online prices for the stuff are exorbitant. I would consider moving to a different state.