My buddy Barry is an excellent writer. Formerly a longtime professional comedy writer, he has written a couple of books about trade blankets, of which he is recognized as the world's foremost authority. In the summer he is one half of the fabulous comedy team of Morty and Schecky with yours truly.

But he also is a great writer when he plays it rather straight. I was knocked out by his blog entry for this month and he said I could repost it.


In my July entry I predicted my own death in Costa Rica – my killer a hooked giant tarpon that would trigger a fatal heart attack. I’m usually kidding when I write, but this time I was not. I had an overpowering feeling that I was going to meet my end on this trip and decided death by very large fish would be a relatively pleasant way to go. I’ve led an interesting life…if the final curtain came down fishing in the Caribbean Sea it would be far better than eventually withering away in assisted living…assisted dying, actually.
My instincts were… you’ll excuse the expression… dead-on. There was a death. It just wasn’t mine.
I did due diligence in the choice of a fishing destination. Trip Advisor, Yelp, fishing forums and I just kept coming back to the same place in northeast Costa Rica. Glowing reviews…the fishing was unparalleled…the food delicious…and the owner was “colorful”.
So was Colonel Kurtz in Apocalypse Now. Meet Dan Wise, the onerous owner and emperor of the Rio Colorado  Lodge.The place was established nearly 50 years ago by a gentleman named Archie Fields. Wise, at the time a Mississippi criminal attorney, had gone there to fish and managed to finagle his way into Fields’ good graces. Fields was dying of cancer and Wise eventually acquired the lodge. Rumor has it he swindled the widow Fields out of the place and never paid a dime for it, but let’s say for the sake of avoiding a libel suit that couldn’t possibly be true.Twenty-two years later at his jungle headquarters Dan Wise at age 69 reigns supreme.
This is a picture of a much younger Lawyer Dan holding a snook. If Dr. Seuss was captioning this picture it’d be Good Snook Bad Schnook. 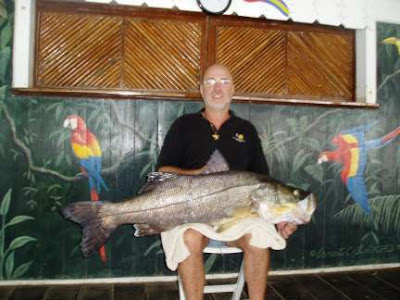 What the Rio Colorado Lodge offers is access to the the greatest tarpon fishery in the world. Schools numbering in the tens of thousands are commonplace – literally acres of fish. It’s an unforgettable sight. And they’re huge – the biggest weighing in at well over 200 pounds.
I enter into evidence this picture of my son Jared battling an enormous tarpon that took an hour and forty minutes to land. The fish launched itself high out of the water like a Tomahawk missile 9 times and towed our boat three miles during the duel. The beast was released to fight again another day and so was the fish. Funny story! Those central american snook aka robalo in the local spanish dialect are some of the best fish I've ever eaten. Mild, moist & tender with no bones. There are places on the west coast of mainland Mexico where you can get a palapa for the night, for $20, right on the beach. The river mouths are great places to catch snook there.