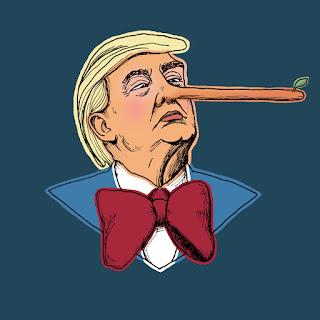 I was blown away by the way the Commerce Department concocted some new lies yesterday to get their boss Wilbur Ross out of hot water. Sort of a three card monte sleight of hand move.

This administration, obviously from the top down, is setting new records in the prevarication department. Records that will probably never be broken, at least in our lifetime.

The big orange boss is the out and out lying champion, something over 4200 lies as of August, at a healthy clip of 7.6 whoppers per day. This is like Ted Williams or Lou Gehrig material, he is setting the lie bar so high I don't think anybody else will ever get near touching it.

He has that rare talent of lying so much that he starts to believe his own lies and that kind of self deception don't come around very often. and it doesn't bother his party much, because they are getting their agenda enacted.

But his subordinates are pretty good  fibbers too. I had some time and started looking into various falsehoods spread by his cronies and cabinet members. Each one of them listed has been accused of some lie or deception. We have some serious comers here folks. I like Zinke as the number two contender but he has some serious competition here and we will have to see how it all shakes out.

I readily admit that Heller and Hawley are not in the cabinet. I threw them in for a little extra spice. When all is said and done this is a murderer's row of liars, sort of like the 27 Yankees of deception. And we get to see and live it in our lifetime. Something to tell the kids about some day. I include a link to each individual and their dishonesty. Don't feel like you need to go through the whole batch. You will get ill.

Wilbur Ross - Liar
Kirstjen Nielsen - Liar
Josh Hawley and Dean Heller - Liars
Mike Pence - Liar
Betsy DeVos - Liar
Mike Mulvaney - Liar
Ben Carson - Liar
Ryan Zinke - Liar
Steve Mnuchin - Liar
Mike Pompeo - Liar and deceiver
Sonny Perdue - Blatant cronyism
Rick Perry - Liar
Alex Azar - Liar
Elaine Chao - unscrupulous self dealer
Jeff Sessions - Liar
Jim Mattis - little white lies to save his job, not so big a deal.
John Kelly - ditto. But the people who actually work for him tend to disagree.
Robert Wilkie and Alex Acosta pretty much get a pass. They don't seem to lie. Probably not long for this administration, they'e just not a good fit.
Andrew Wheeler may be a racist but I haven't seen any evidence that he is a baldface liar yet. But he is new. There is still time.
Dan Coats - not a liar
Gina Haspel - not a liar
Nikki Haley - not a liar
Linda McMahon has been accused of lying but she merely seems really sneaky to me.

A sad, but not surprising posting. On Nickie Haley, I hope she is lying when she recently stated "I look forward to supporting the president in the next election.” I always make a point of giving every president a chance even if I didn't vote for the individual. With this one it lasted less than a week. For a very short time I would think, well he can't get worse than this, they he would. It just gets more bizarre and disturbing as time goes on. A terrible example of what this country is suppose to be about. He doesn't even seem to understand the constitution, or he just doesn't care. And as this blog points out, his cronies are not above some serious lying either.


Is there a MAGAdroid with room-temperature+ I.Q. who honestly thinks Trump and his crew are not liars?

His semi-intelligent supporters know Trump and his cronies are world class liars - how could they not - but the 'conservative' herd don't care, neo-pubs love those assholes In D.C. because every lie told is another slap in the face to the libtard enemy.

They know for a plain fact that Trump and his crew are liars and they love it. Some of them even brag about it online.

Any Fallbrook conservatives willing to say Trump and his lyin' confederates are honest? With a straight face?