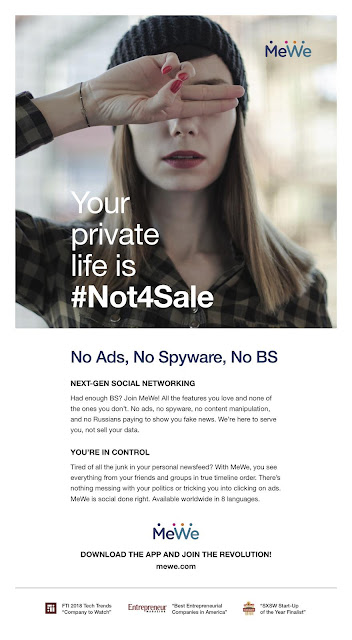 Not wanting to do the Facebook thing again and with the demise of Google + I wanted to find a social media platform to share my photography.

One of the administrators invited me to join his nature photography group at MeWe. MeWe is the brainchild of one Mark Weinstein and bills itself as a next-gen platform with no tracking, Russians or chicanery. I signed up today. Free.

Looks pretty decent. There is at least some involvement with Tim Berners Lee, an early internet visionary.

But, the platform also seems to tilt quite strongly to the right. Weinstein bills himself as a Libertarian but the political groups on MeWe seem solely to be inhabited by Alex Jones wackjobs. "Q" tin foil types, MAGA deplorables and other hard core right wingers that have been mostly thrown off of prior sites. Very scary, honestly. Not sure if it by design or circumstance.

Not sure it matters as I don't need to discuss politics publicly but at least in that sense, it is not a very comfortable space for me.

Try Instagram...easy to use, little politics.