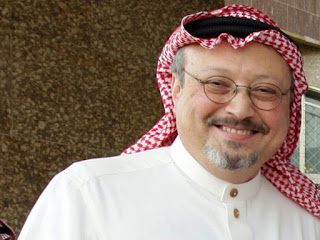 59 year old Saudi dissident Jamal Khashoggi walked into the Saudi consulate in Turkey but he never came out. In one piece anyway. Evidently some spook caught the whole thing on tape. Khashoggi was trying to obtain wedding papers.


“This took place in Turkey, and to the best of our knowledge, Khashoggi is not a United States citizen, he’s a permanent resident,” the president said. “We don’t like it, even a little bit. But as to whether or not we should stop $110 billion from being spent in this country, knowing they [Saudi Arabia] have four or five alternatives, two very good alternatives, that would not be acceptable to me.”

And the United States is really sorry about the whole thing but damn, we have been selling the Saudis a lot of weapons and we don't really want to upset the apple cart. They mean jobs. After all this is just one guy. Not like he is an American or anything. And did we mention that we are selling them lots of weapons?


"That would be hurting us," Trump told Fox News when asked about the option of blocking the sale of weapons Saudi Arabia is largely using to wage a war in Yemen that has come under harsh criticism."We have jobs," Trump said on Fox News. "We have a lot of things happening in this country. We have a country that's doing probably better economically than it's ever done before. Part of that is what we are doing with our defense systems and everybody is wanting them, and frankly, I think that would be a very, very tough pill to swallow for our country."

Remember when our country actually stood for something? Besides filthy lucre?
Posted by Blue Heron at 5:36 PM

They gave Trump a party and let him play with their swords, so of course the Saudis can do no wrong.

I worry a bit about Israel being in bed with the Saudis, but if any country can handle middle eastern duplicity it would be Israel.

Netanyahu will take a backseat to nobody in matters of duplicity.