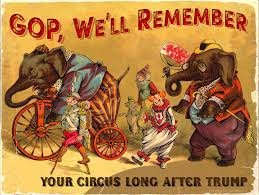 Got to love this. 56,000 Illinois voters voted for an avowed nazi and holocaust denier, GOP candidate Art Jones.

In my fiftieth district, voter chose an admitted philanderer, Duncan Hunter, who also happens to be under indictment for campaign fraud over his opponent, after branding said opponent, Ammar Campa Najjar as a sleeper terrorist agent.

Ron De Santis will be the new Florida governor. This is the man who obliquely compared his african american opponent as a monkey but he actually had a long history of racial epithets.

Rep. Steve King unfortunately still has a job. The Iowa congressman recently returned from a trip to Auschwitz where he met with a group with nazi ties in order to get the "other side" of the story. King is an outright white supremacist but it doesn't matter a bit to the people who elected him.

Other avowed Republican racists got buried at the polls including Corey Stewart, Russell Walker, John Fitzgerald, Steve West, Paul Nehlen and Patrick Little. Some were returned to office.

The President got in on the fun himself today, making fun of a Japanese reporter's accent among others. If this is making America great again I for one prefer keeping it shitty. I guess I have no sense of humor. He also accused a black reporter of being a racist for asking him about his recent comments on nationalism.

I feel bad for Gillum. And Beto. And Abrams. Good and decent candidates and human beings. Hope that we will see them run for public office again.
Posted by Blue Heron at 7:35 PM

I agree on all counts... especially about those who were closely defeated continuing on. They are some good folks!

Yeah, Gillum under investigation on numerous fronts for corruption, Abrams owes over $200,000 in personal debt and wants to run Georgia, and Beto wanted to split from a DWI accident but was stopped by onlookers, and blew a $70M wad of other people's money on a botched campaign.

Looks like a pattern. You really can pick um.