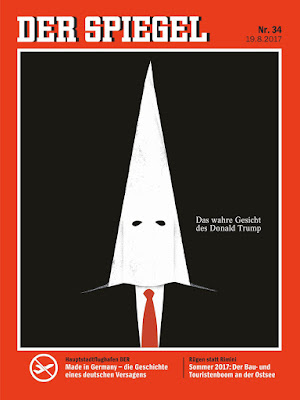 This fits into a very familiar pattern for Trump. He always finds a reason to denigrate black people. According to the President, Congresswoman Maxine Waters is an extraordinarily "low i.q." person, Don Lemon is the "dumbest man on television" and has publicly questioned Lebron James intelligence.

Andrew Gillum is a "thief" and Stacey Abrams, a Yale Law School graduate is "unqualified."

He is quoted by employees as stating that laziness is a trait in blacks and according to the Federal Company, his real estate company gave white people preferential treatment in the 1970's, refusing to rent to blacks.

According to Michael Cohen Trump told his one time fixer that blacks were "too stupid" to vote for him and that there was no way he could let an african american contestant win on The Apprentice.

If you read about Trump's father, Fred, you can see that the apple doesn't really fall too far from the tree. Arrested marching with the KKK in 1927, he instituted a racist rental practice at his low income apartment projects.

In fact it was so bad that Woody Guthrie wrote a song about the senior Trump, saying he incited racial hate in the "bloodpot of the human heart."

Kid learned his lessons well. Not sure why he has such an animosity for blacks and women for that matter but he clearly does. He is a disgrace, a disgusting human being, a national tarnish and embarrassment. May his vile stench and toxin be purged from the nation and globe forever.
Posted by Blue Heron at 8:40 PM