I think I first got acquainted with Ricky Jay on sunday mornings as a kid. He had a show from the Long Beach Pike where he threw the cards through watermelons and the like. It was on after demo derby and roller derby if memory serves. 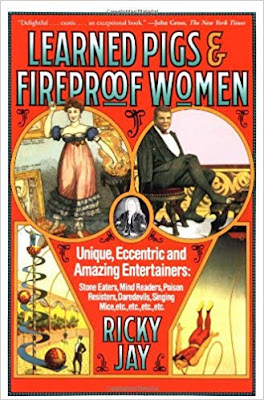 Guy was one of a kind. What shtick, patois. Later in life I was lucky enough to meet Ricky at the Antiquarian Book and Print Fair in Pasadena. I sold him something and we discussed his great book Learned Pigs and Fireproof Women.

Brilliant magician, card sharp, actor, historian, wit, he had it all and will be sorely missed. There will never be another Ricky Jay.
Posted by Blue Heron at 11:39 AM