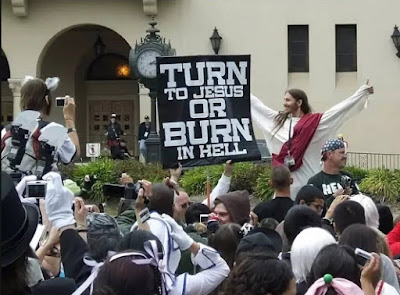 So many wackjobs out there it is hard to cover them all. I may have forgotten to write about Washington State Rep. Matt Shea.

Matt wrote a four page biblical manifesto that is pretty frightening. Outlaw gay marriage and abortion, outlaw communism, occultism and the rest of the isms, require adherence to biblical law, and if that doesn't do the trick, kill all the non christian males. Nice.

But don't think that these revelations hurt Matt any. He won handily up in Spokane Tuesday with 58.3% of the vote. This pretty much follows the national numbers. About three in four white evangelicals voted for the Republicans these midterms, even if the candidate was an avowed supremacist like Art Jones or Steve King.


A preliminary analysis of the 2018 midterm elections finds considerable continuity in the voting patterns of several key religious groups. White evangelical or born-again Christians backed Republican candidates for the U.S. House of Representatives at about the same rate they did in 2014. Meanwhile, religiously unaffiliated voters (also known as religious “nones”) and Jewish voters once again backed Democratic candidates by large margins.Three-quarters (75%) of white voters who describe themselves as evangelical or born-again Christians (a group that includes Protestants, Catholics and members of other faiths) voted for Republican House candidates in 2018, according to National Election Pool (NEP) exit poll data reported by NBC News. That is on par with the share who did so in midterm elections in 2014 (78%) and 2010 (77%).

Now I may not agree with the Republicans on many issues but I have never advocated killing all the first born males of my political opponents or anything nearly so draconian. Not interested in getting into a shooting war with my fellow citizens. These people frankly scare the shit out of me. And I am sure that they are much better armed.

On a similar topic, word comes down the pike today that the newly appointed acting attorney general, Matthew Whitaker has called for all judges to be Christian. Whitaker says they need a biblical view of justice. Maybe we can go back to stoning scofflaws in the streets and crucifixion? An old testament wake up call.

*
Democrats are apparently having a hard time making inroads into the non college educated white demographic. The dumbshit vote.

*
God, in his or her infinite wisdom, has really been taking it out on country music fans of late. Word is that many of the attendees at the Thousand Oaks shooting were also at the Las Vegas massacre. Very sad. Nine out of ten Americans want stronger back ground checks for gun purchases. But the red Senate refuses to follow the will of the people. I call it the tyranny of the sticks. And everyone will complain and no one will do anything about it once again. Because podunk has control of the steering wheel.

*
On the topic of religion, had a weird call to look at some paintings last month. Woman thought that I had seen them before. I had, twenty years ago, I had given the woman an appraisal. She had been at least slightly sophisticated, having danced with Balanchine in the New York City ballet. But every other word out of her mouth was don't jew me down, jew this, jew that and I eventually freed myself from having anything to do with her. Vibes were always just terrible.

She died evidently a while back and I recently went through a go round with her daughter that doesn't need public disclosure but was pretty unsatisfactory as well. My friend called the other day and mentioned that besides all the nazi and s.s. material that you would expect to find in such an estate they found a complete KKK hood and robe as well. Beautiful.

Bernie Sanders raised some feathers today when he said that not all white people that failed to vote for black candidates were racists. True and fair enough. And certainly not all christians want to smite the nonbelievers. But how are we supposed to figure out exactly who is who?

"Caedite eos. Novit enim Dominus qui sunt eius." ("Kill them all; let God sort them out.") -Arnaud Amalric This was said just prior to a nice Crusader massacre. I think we are quite a way from this but I don't think we should forget that we in the good old USA are fully capable of descending to this level and our history is packed with incidents of massacre as well as a jim dandy Civil War that really traumatized the country in a way only remembered by Historians and those few literate folks left in our glorious Republic.

I think Ms. Pelosi had a smart strategy when confronted with the baiting and blazing hostility coming from the right. She advised congressional candidates to run highly local campaigns focused on the actual concerns of the constituents and she advised them to avoid taking Trumpian bait. This general strategy may apply to those of us who are not goose-stepping our way to the Christian Reich. That is, when confronted with this provocation, to respond rationally to the actual issues and to try to avoid stepping into the minefield of blazing emotion. It may well not work and we could have a very long period of intense and outrageously angry political "discourse" very possibly including significant violence. However prior to heading out to the gun store we ought to see if it is possible to build a coalition of rational supporters of a democratic republic. That will probably work and we will probably make it to the next historical phase with an intact republic. Probably though is as good as it gets, nothing is guaranteed. There is absolutely no assurance that the longest lasting experiment in democracy will not fail like all others before it. We are in a historical period that has certain similarities to other collapsing democratic systems. We flip out and guarantee the failure of the republic or we can Keep Calm and Carry On with a reasonable chance of upholding the constitution.

Still, it won't hurt to stock up on canned goods.

Things are getting worse by the minute. I'm on a constant diet of "Hazel" and "Room 222" episodes. Hoping all I need is a dose of good old fashioned distractions.