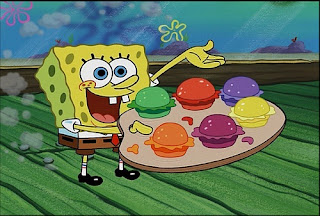 Did I ever watch a single episode of the show in its twenty year run? No, I did not? So why do I bring it up?

In the first place, ALS is a terrible disease. My friends and I watched our buddy Clark Crouse die of the disease and I wouldn't wish it on my worst enemy.

Secondly, I was going to write a snarky letter to Morty along the lines of me favoring leaving a legacy of snorting drain cleaner and abusing shih tzu's rather than leaving as my life's work a legacy of what appears to be a pretty dorky cartoon.

And then I started actually reading about the guy and it turns out that he was a very talented fellow indeed. And the show was both informative and groundbreaking at times and is still the highest rated franchise to ever appear on Nickelodeon and MTV, bringing in an estimated $13 billion dollars in revenue.

Teaches me once again to try and learn something before I open my trap. Keep on trucking, Spongebob.
Posted by Blue Heron at 11:16 AM

Check out the Sea Bear episode...