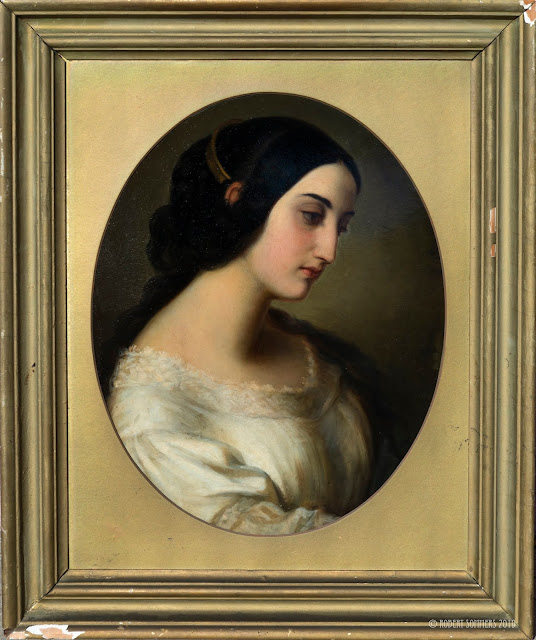 I have bought and sold art since 1975. Although I only lived with my father for one or two years past the age of four, thankfully I was exposed to the joys of fine painting and decorative arts at a very young age through his excellent eye and magnificent collection. As I got older I developed a taste for both the modern and the classical and always felt that they could inhabit the same universe quite easily. One criteria; does the piece have artistic value and integrity? Very subjective, as you can imagine.

I recently took this wonderful painting in on consignment, the owner wishing to move into a new decorative phase of her life. It was bought long ago at an auction in Chicago. I just had it cleaned. On the verso it is titled in pencil, in german, Portrait of Theodora von Hermannsthal. I am not sure of the artist, it may have been on the backing paper that someone carelessly tore off at some point. I will wait until a german speaker comes into the gallery, perhaps they can glean more information from the remaining script? A cursory search has provided no clues as to the sitter. Reminds me a bit of the very much later Polish artist Tamara de Lempicka.

This is a fairly large work, the framed dimensions of the painting are 30 x 25" and the original frame has certainly had better days. The painting is painting on a very thin substrate which is glued down to board and does not extend much beyond the oval. This type of mat is called tonneau, from the french word for tunnel and was very popular in the 18th and 19th century.

Hands were the most difficult feature to paint and this approach obviated the need to render them and saved time and money for all concerned. You can tell that the painting is pre twentieth century because of the craquelure in the sitter's black mane. In the 19th century artists were still using bituminous coal pigments that tended to break down and fracture.

I have had several beautiful portraits in my twenty three years of having an open gallery. Two were from Académie Julian in Paris, where teachers like Julian, Royer, Jean-Paul Laurens, Gabriel Ferrier, Tony Robert-Fleury and Lefebvre taught many students after its inception in 1868, including noted American artists Twachtman, Henri, Hassam and Sargent.

I am not sure when this marvelous painting will sell. Portraits are soft, too personal in today's impersonal world. As are landscapes. I am hoping someone else thinks it is as wonderful as I do. I still own one of my Académie Julian paintings, obviously not having found anyone yet who treasures it as I do.

Which leads me to the point of today's tract or sermon. While I recognize that tastes change, as they always have, we are in mortal danger of throwing the past away, at least in terms of the decorative arts and literature. I have been harping on this for years like the boy who cried wolf, but it has gotten worse then ever. People seem to no longer appreciate the past and knowledge of it is at a nadir. You really see it in the art and decorative art world.

Modernism has crept upon us like the plague. Now don't get me wrong, good art is good art, modern or classic, but the amount of vapid sludge that is masquerading as modern art at present is truly remarkable.

Think, people were actually shelling out a cool $500,000 a sculpture to get gold plated turds personally extruded from the artist Terrence Koh. Sold out or ran out.

Thanks, I will pass.

There is much modern art that I truly love. Frankenthaler, Still, Kline, De Kooning. I have sold Thiebaud, Ruscha and others. But to look at much of what passes for modern art today, without a foundation in the classic, it really looks quite obscene to me.

The whole Eli Broad thing, so cynical and artistically thin and devoid of any sense of craft or beauty. Emotionally distant. Besides a few notable exceptions like Basquiat, Gerhard Richter and Francis Bacon, how many of these modernist frauds could even load or use a brush? Or should I say, even learned to paint?

I was looking at this upcoming auction at Sotheby's, the Nahons', and thinking I would sooner slit my throat than live with art so horrible, jarring and discordant. Or have to look at this horrible stainless steel piece Ballerinas by Jeff Koons every day. To each his own I guess. But I personally find it hideous, a visual bad PCP trip.

Old Master prices are steadily declining. Is a Pollock drip painting less or more important than a Caravaggio or a Velasquez?

The Los Angeles Art Show is approaching. Costs a fortune to exhibit. I used to do it. 14k for a booth and that is a start. I did quite well there. There are now no historic dealers left, Trotter, Karges, Stern, Rutberg are all I believe now gone from the show. Maybe the venerable antique dealer M.S. Rau is still around but they are a definite outlier, stuck in the small Roots section. Now instead of traditional and modern, the two categories for the show are modern and contemporary. Shame. I believe Miami is no different.

I saw it coming, years ago. Knew that one day I would have to make a choice between awful contemporary and the 19th century or earlier. I decided that I was stepping back to starve in the past. It is very hard to sell what I abhor. Funny that way.

For the last thirty or forty years or so, American Impressionism has been the dominant leader in the American art world. Redmond, Redfield, Garber, Kleitsch, Dixon, Frieseke, Dunton, Hopper, Wyeth. Now one after another, the fabulous galleries that once sold that work are either disappearing or changing to modern in the blink of an eye.

I recently called two major New York galleries I used to sell to and if it is not a non objective conceptual abstract blob they are no longer interested. Both of these galleries were once titans of impressionism. But that was last week. Same thing is happening on the West Coast and even on my lowly level at the shows. People are looking for cold and synthetic and forsaking the warm and ambient. Strictly flavor of the month.

Do you see how great Picasso was in the early days before he turned himself into a cliché and factory? How beautiful and sensitive.

We have lost so many categories of institutional knowledge in the decorative arts in this modern world of plastic. Silver, Oriental carpets, much Asian art, porcelain, brown furniture, bronze, pre twentieth century, I could go on and on. You see danish modern on television so that is still okay, with an eccentric ashtray or two thrown in for good measure. The people who truly knew something about these earlier periods are mostly dead and gone, their knowledge never to return in this new age of the visceral and throwaway. People are looking for seventies and eighties stuff these days, god bless them. New, new, new.

I was talking to a local teacher the other day and was informed that the new Junior High Library has no books. Imagine, a library without books? It is all non tangible now, you know... Which is all well and good but also very sad, the tomes I love from the twenties, the O Henry, the Runyan, the Upfield, the Foresters, all out of reach and invisible to the modern student.  Lost in time, I'm afraid. The reverse Flynn effect in full bore, barreling down the tonneau of the insipid towards who knows where?

You can't force people to like anything, any more than you can force them to buy buggy whips or Eastlake furniture. But you, or I for that matter, can hope that they can at least develop an eye for balance and composition, an appreciation for beauty and the ability to recognize the truly hideous and garish.

It is indeed a brave new, largely illiterate world. Not sure what part I will have in it.