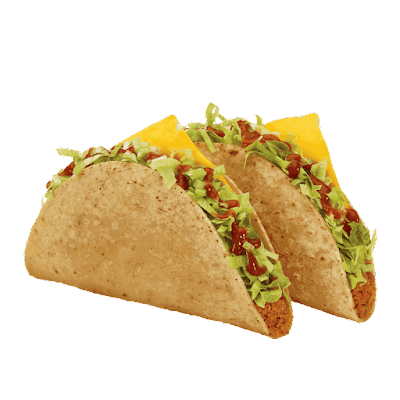 I was running a little crazy this morning, pressed for time. I had a minor eye surgery scheduled in Murrieta and about forty minutes to grab a bite and get up there.

I headed for Jack in the Box, something I honestly rarely do and grabbed the two tacos for a buck deal. Threw in a sausage croissant. Great go to on the cheap.

I love Jack in the Box tacos. So does my sister Barbara in Florida who can't get them back there and has to stop for them first thing when she is in California. There is a gamey quality to the mystery meat paste inside the crackly gems I find both pleasing and intriguing in some horrible and disgusting way.

Jack in the Box is cool, a hometown San Diego product now owned by Ralston Purina and one of two restaurants open all night in Fallbrook, the other being Robertitos. And yes, Ralston Purina is the dog food company but it would be in very poor taste to make any kind of culinary nexus connection. Supposedly, the local Jack is a great tweaker hangout at three in the morning. I hear the company is in some bad financial shape. Franchisees are pissed at headquarters at the moment for some reason.

Frankly there was something a little off on my tacos today, they didn't have the usual je ne cest quois. Hope they haven't monkeyed with their little treasure. Will try again soon and try to nail the difference down. So what are the fabulous and incredibly delectable tacos actually made of? Hamster? Cockroach paste? Is it a tang like space food chemical concoction? Some vegans swear that they are made of soy and down them without guilt. Got me.

I did some checking.

So the second largest ingredient in the beef taco is chicken? Kind of weird but I can live with that. By the way, Jack and the Box reportedly sells 554 million of these babies a year, over 1055 a minute. I assure you that somebody else is eating them besides me, although few will apparently confess. More on the scrumptious morsels here, which the snide writer likens to a "wet envelope of cat food." Accurate but not altogether charitable.

Anyway, as I said, there was something a little off with them today. They lacked their customary "funny smell." By the way the larger supertaco from Jack is a totally different animal and lacks all the redeemable virtues of its poor and diminutive relative. And full disclosure, the sausage croissant was pretty soaked in its own grease. Which was okay because at least the grease wasn't rancid as it can be if you happen to catch Jack on the wrong day.

By the way, I recently discovered the fish taco at Robertitos. Where have I been? A generous portion of deep fried fish with a bit of pico de gallo, cabbage and ample lime slices, all smothered with an appropriate cream sauce. Sprinkle with a liberal dollop of hot sauce. Only three fifty, half the price of the fish burrito and even better, if you ask me. I usually get it with zanahorias, the hot carrots and jalapenos combo that will set you back another fifty cents. Top it off with a fanta and you are in heaven.

Tell them that you want the Blue Heron Blast discount. They will look at you funny and maybe threaten to call the cops.
Posted by Blue Heron at 6:18 PM

Jack-in-the-Box tacos come up regularly in the studio, they haven’t changed since I was in the third grade. Once a month, whether I need them or not, vegan concerns not withstanding…

Your Robertitos description brings back memories of a quintessential San Diego ‘thing’. Not Mexico, not the States, just a border melange. Made me miss it something fierce - especially with pickled zanahorias!

Hangin' with you after a day at Swami's, downing Roberto's humongous chicken burrito(s) smothered in guac & sour creme...oh God, I guess there really ARE times I miss the States!

I pretty much hate Jack’s Box.... about every 10 years they advertise some new item that, with the wizardary of film, looks delicious. I decide to give it a try.... only to be disappointed once more. It has been close to 10 years since my last visit. Another may happen soon?

Oh my gosh yesterday I had a CRAVING for a taco and actually drove toward Jack-in-the-Crack thinking I would get one of their curious tacos. A voice spoke to me "don't do it" and I drove straight past. The other option up here in the glorious PNW is a sketchy franchise called TACO TIME. Tried it once in 2016 and was stunned by the sweet 'salsa' so never returned. I thought "should I give them another go?" but the voice says "don't do it". My mind now considered whether it was worth it to make the long drive to the nearest Del Taco for a creamy queso delight. Sometimes when I am in that area I go in and stock up on their mild sauce, shamelessly stuffing my pockets and purse with what is hands-down THE BEST fast food taco sauce in packet form. But I digress. I finally took a chance and tried a local Mexican family-owned restaurant called Sergio's half expecting the food would be mediocre compared to my favorite places in SoCal. I was convinced my homemade Mexican cuisine had to be better than the local fare. WRONG! At Sergio's I found the freshest fish tacos, huge flaky portions wrapped in pillowy flour tortillas. Taco craving satiated.

Glad you are not forsaken up there, Brigitte. Best,

Well, I gave up urging you to go to Robertitos years ago. Have the fish burrito next. AWESOME!