We were headed down to watch a college basketball game in San Diego. I left Fallbrook and picked Kent up in Oceanside. Kent wanted to know where I wanted to eat. Hmm, I thought long and hard. I whittled it down in my mind to two places, The Godfather and the Butcher Shop, both very old school San Diego and both situated in Clairemont Mesa.

I couldn't make up my mind and called my wife. "Go to the Butcher Shop," she said. "They'll have to clean the cobwebs off the booths of the Godfather." That settled it, being your basic contrarian, we went to The Godfather. It has honestly been decades since I have eaten there.

Arriving early, we sat in the seats near the fountain outside and waited for the doors to open. Enjoyed the quiet evening. When the door finally opened we were the first one's in and a well dressed gent led us to our table. Place was immaculate, no cobwebs in sight. Didn't look like anything had changed in the thirty or so years since I had eaten there. Welcome back to the seventies, and I say that with love and total respect. 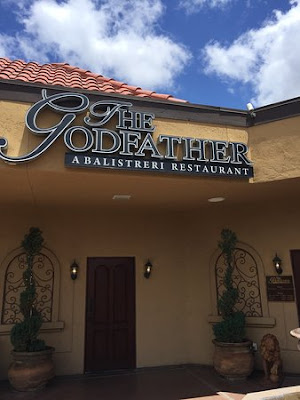 The Godfather is your dad's swank sort of place, down to the plastic grapes and Brando posters. Sort of place you could imagine the Ratpack enjoying a meal at. Decidedly non nouvelle.

A place with eight nine kinds of veal on the menu, scampi, steaks, a place unfazed by time. Mussels, carciofi, canneloni, branzino, frutti di mare, the same menu and food quality you would find at a great spot in Jersey City. Or the famous mob hangout the Sommers boys would frequent while at our blackjack junkets in Las Vegas, the Villa D'Este. I'm a sucker for red velvet.

My family has been eating at the Balistreri family restaurant since they opened the joint in 1974. My father, brother and I had an office around the corner on Convoy Court. And now I am the only one left.

A waiter came and got our drink order, Kent ordered a very nice glass of red wine and I settled for ice water. Brought us good bread. I decided to quiz him. "I haven't been here in a very long time. You still got the wonderful fried zucchini with parmesan?" "Yes sir," he replied, "No, its not on the menu but we will bring it right to your table."

Another waiter walked by that I faintly recognized. "Hey I remember you." He told me in a voice with a slight european accent that he had left thirty years ago but had recently come back. "I remember you," I explained. "The big guy still here, the guy with the operatic voice who would sing once in a while?" "Isadora has retired but he still comes in for a few hours every day to make sure that the sauces are right."

The Godfather was one of our family restaurants, like Busalacchis was later on. They served the type of italian food our family liked to eat. Always good, always well prepared. I ordered veal marsala and a salad and Kent had the superb steak Sinatra, a specialty dish. Both were accompanied by complimentary pasta. I looked around. It seems like every booth in the rapidly filling restaurant was filled with people just like me, people and families who looked like they had been all eating there for over forty years.  Old timers. Eating at a best kept secret, a very familiar place where the menu was good and never needed to change. A classy joint, unaffected by time or the next best thing.

I don't know what made me pick the place. Or maybe I do. My dad and brother and I had season basketball tickets, Rockets, Sails, Conquistadors and the dreaded Clippers and there were many times when we would stop there on the way to a game I imagine. Or hit the Butcher Shop for their stroganoff. I guess I was missing my brother and my pop subconsciously and going to one of our old hangouts helped me get back in touch.

By the way, the food was delicious. Kent thought so too. Zucchini was thinly sliced, as perfect as I remember. The marsala sauce was sublime. Thank you Isadore. Not a cheap dinner but not extravagant. You can handle it.

I'm going back and its not going to take me another twenty or thirty years to do it. The Godfather, it's like going home again.

I believe in old friends, old restaurants and old doctors. Things that stand the test of time.

Good looking menu. Do they make the caesar salad tableside? Always liked the Butcher Shop too.

Screw the salad, how did your surgery go?

They say it went well. I feel like I got hit by a bus. I've been eating liquid food for a week. Need to get some real food soon. Even if it's just jack in the box tacos. ✌🏾

Wishing you the speediest and most painless complete recovery.

Thanks Rob. I appreciate that very much.