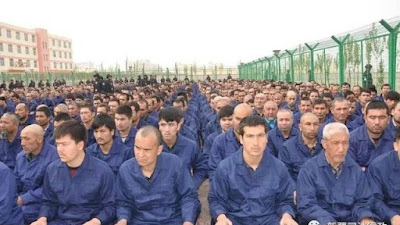 There is no sadder situation in the world than what is happening to the Uighur people that inhabit the Xinjiang province of China.

A Turkic people, they have lived on their native Tian Shan for over 6500 years, they were incorporated into China by conquest in 1876. Xinjiang means new territory in Chinese.

There are said to be up to one million Uighurs in concentration camps in Western China called "re-education camps." Their language, religion and islamic cultural practices are now forbidden and they are in the process of undergoing "sinoization."


Uyghurs in Xinjiang suffer under a "fully-fledged police state" with extensive controls and restrictions upon their religious, cultural and social life.In Xinjiang, the Chinese government has expanded police surveillance to watch for signs of "religious extremism" that include owning books about Uyghurs, growing a beard, having a prayer rug, or quitting smoking or drinking. The government had also installed cameras in the homes of private citizens.
Further, at least 120,000 (and possibly over 1 million)Uyghurs are detained in mass detention camps, termed "re-education camps," aimed at changing the political thinking of detainees, their identities, and their religious beliefs. Some of these facilities keep prisoners detained around the clock, while others release their inmates at night to return home. The New York Times has reported inmates are required to "sing hymns praising the Chinese Communist Party and write 'self-criticism' essays," and that prisoners are also subjected to physical and verbal abuse by prison guards. Chinese officials are sometimes assigned to monitor the families of current inmates, and women have been detained due to actions by their sons or husbands.
Beijing denied the existence of the camps initially, but have changed their stance since to that the camps serve to combat terrorism and give vocational training to the Uighur people. Yet, calls by activists to open the camps to the visitors to prove their function have gone unheeded. Plus, media groups have shown that many in the camps were forcibly detained there in rough unhygienic conditions while undergoing political indoctrination.The lengthy isolation periods between the two Uyghur genders has been interpreted by some analysts as an attempt to inhibit Uyghur procreation in order to change the ethnic demographics of the country.

I read an interesting article on the subject in the NYT the other day. Taking a page from Joe Stalin, the utterly ruthless and immoral Chinese are arresting Uighur poets, writers, intellectuals and scholars. Moderate and passive people. First slaughter the lambs. There are reports of mass murders being held in the camps which can not be corroborated because third party independent observers are not allowed entrance.

The concentration camps are being used to provide free or low cost forced labor. Some of the goods produced there have made it to the United States. Slavery. To companies like Baxter Sportswear.


“These people who are detained provide free or low-cost forced labor for these factories,” said Mehmet Volkan Kasikci, a researcher in Turkey who has collected accounts of inmates in the factories by interviewing relatives who have left China. “Stories continue to come to me,” he said.

The Chinese are also harassing Uighurs in foreign lands and threatening their families back in Xinjiang with retribution.

Is there a company more sinister and despicable than the current Chinese regime which appears more Stalinist, immoral and repressive every day?

I doubt the Chinese government changes are as big as our folly in thinking we could change them. Our judgement was clouded by greed as we contemplated access to a huge market. The jokes on us.

Is changes a typo? Assuming that you meant charges, I beg to disagree. Putting a whole ethnic population in a gulag is beyond despicable.

Well, it is poor grammar I suppose, What might have been more clear would have been something like. We engaged China thinking that open trade, etc. would liberalize Chinese society and bring China into a more open world and trading system. That was folly and it has backfired as China became a great economy that is integrated into the world but it never left its repressive Communist system. Indeed the intense social control remained under a facade of a capitalist economy. Proof of this is in the horrid treatment of the Urgers. OK, now I am clear and now I am boring. Oh well, life is hard.