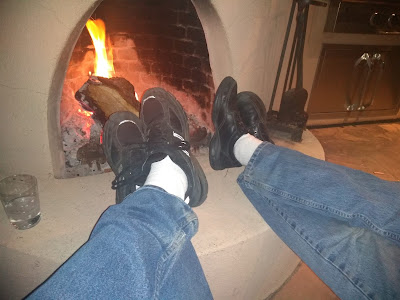 I will be the first to admit, I am no fashion plate. Far from it. I came home from Arizona in a loud Hawaiian shirt and wearing these discordant colored socks I got from her store and my spouse said, "Well, you're definitely not gay." Like no self respecting gay man would ever put colors together like that. I fear that she is correct.

I am really not that much into my sartorial self image. As a seventies kid, I grew up around the time of fry boots and clark wallabees, levis cords and velours, hang ten, rugby shirts and levis 501 button downs and pretty much never left. Serious case of arrested development.

The standard attire in my little corner of the antique business has been a pair of jeans and a Hawaiian shirt these past twenty years. Pair of tennis shoes. But maybe not any more? Is there a change in the air? Am I no longer cutting the mustard? I got a lot of crappy comments about my shirts this weekend. You don't wear that island stuff in the desert, son.

I looked like a turd in a punch bowl in my Hawaiian shirt in Mesa, Arizona this week. People were giving me funny looks. Someone whispered in my ear that what was okay in Santa Fe was not okay in Phoenix. Even Danny Verrier had a regular shirt on, which is sort of a first I think.

My wife also gives me grief quite often about wearing white socks with black shoes and jeans. I guess it is a fashion no no. I pointed out to her that Michael Jackson brought the practice into vogue but she was having none of it. Look here. These are my buddy Dain's feet next to mine, in the picture above, getting warmed near his horno in the back yard. So as you can see, at least I'm not the only one who doesn't give a shit. But he does own a tux and can be dressed up on occasion when it is required. My wardrobe is pretty thin these days, can't quite squeeze into the sport coats anymore.

I did this cowboy and indian show in Mesa this weekend, used to be called High Noon but now it is the Old West Show. Did barely tolerable, if you're wondering. Some did better, some did worse. But I did notice that there were an awful lot of older fellers all walking around dressed like well, dandies. Ten gallon hats and waxed mustaches. All with a similar checked shirt. Some wearing spurs on their boots. Many accompanied by rather plain looking women. Only one peacock allowed on this stagecoach.

And I got to thinking that many of these old boys were actually playing costume. Definitely there were some legitimate cowboys  but I think there were a bunch of accountants mixed in playing dress up. Certainly that many fellas couldn't have all mosied up from the ranch. And kind of thinking that many of them seemed very, well, gay. Which is not a bad thing by any stretch. They just may not know it yet. I grew up in the horse show business, worked hunter jumper, saddlebred and western. Invariably the latter group was the most gay. Lots of gay cowboys. Beautiful, no problem. Viva la difference.

It is my personal experience and perception that most straight men don't give a shit enough to be so wrapped up in their clothing and self image. But I could be wrong. It is a brave new metrosexual world. In France the beautiful men we saw with their beautiful women in the restaurants looked like they had primped for hours and some were even wearing makeup. This sort of thing gives me the willies but I guess it takes all kinds and I am a bit of a troglodyte.

When the fat, double chinned guy in levis and hawaiian shirt look comes back into vogue, damn am I going to be ready.
Posted by Blue Heron at 5:58 PM

I am working hard to introduce "couture sans abri" (homeless fashion) to fallbrook. We have many accomplished practitioners of this in the village and I am emulating them. I am at my best when I emerge from cleaning up the pigeon lofts as I usually have a good sprinkling of feathers and sometimes other decorations. I am working toward a fashion show but I have much to figure out before announcing a date.

When in Rome wear a Hawaiian shirt.....
Maybe those dandies were from Palm Springs or Hillcrest California and did not know they should not wear fancy western attire in Arizona? Amazing that they were not gunned down at the show by spur booted NRA supporters. Wasn't the last mass murder in a country western bar in L.A. California?