An intelligent man is sometimes forced to be drunk to spend time with his fools.
Ernest Hemingway

I am not much of a drinker, never have been. Never had the taste for beer and I developed an awful allergy to wine and champagne somewhere along the way.

One pop and I am sneezing in thirty seconds and clogged for three days, sulfite or non sulfite. It is alright, don't feel sorry for me, I make up for it in other ways.

Like Vodka. Vodka is always good. Could 144 million Russians be all wrong? I tend to mix it with citrus, fresh satsumas the other night, heavenly. But not too much vodka. I don't really need the buzz and I frankly prefer the flavor of the tangerine.

My other go to if I am in a social setting that requires me to imbibe is irish whiskey, specifically Jamisons but Bushmills in a pinch. I have never had the taste for scotch, rye, bourbon or American whiskey but there is something clean about the taste of Irish that I like and it goes down easy.

I have tried some of the other hipper brands of the stuff, Powers and Red Breast, Green Spot, but frankly can't tell all that much difference so I normally stick with the old reliable catholic whiskey, Jamisons.

We were at a dinner the other night and I didn't want to look like Bill W. so I asked for a shot. The hostess didn't have any Irish but gave me a shot of Glenlivet single malt. Last pour in the bottle. It was pretty good, had more notes and side flavors than I am accustomed to. Never did the single malt thing, in the past couple years it has become a rich man's game and I don't really belong. Great for people who are figuring out how to blow their big wad of cash. Alas, not I.

My buddy Pat is a Scot who lives in England and he wrote me the other day after I mentioned the Glenlivet.


Bliadhna ur Mhath Robert
I hope 2019 is kind to us old codgers. A little dosh wouldn’t go amiss to help us in our old age but the thing we really want is good health.Here’s to us and good health!(Takes large slurp of 12yo Highland Park .....)Px

Jameson’s is cooking whisky but it’s okay with a mixer You would like highland park with a dash of nice water. No ice. Propre sipping dram Bliss......

Cooking whiskey, heh? He sent me this picture of his favorite libation. 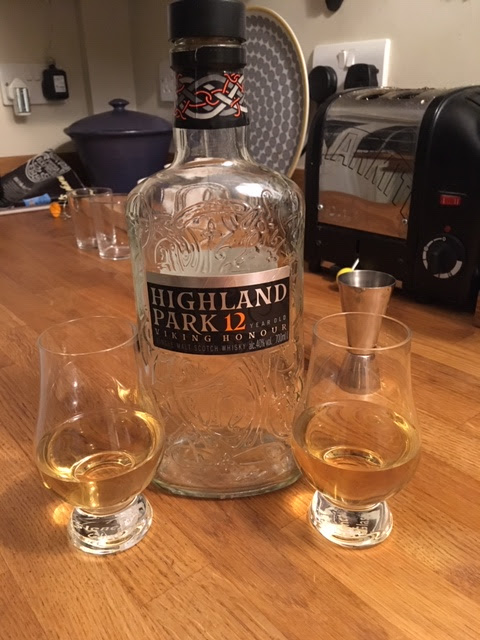 Nice looking bottle, I like the celtic knot action. I looked the stuff up, definitely ain't cheap. And thanks for pouring me a shot, mate.

I think I will be sticking with the twelve year old stuff at these prices or go back to my irish.