I am not a big belief system guy. Any system. I prefer to ponder human psychology, cultural anthropology and this great big, magical world of ours without any sort of supernatural filter. We sentient beings obviously exist, we share a world, we breathe and things go better for all of us when we get along, I do believe that much.

Do I respect and love many of you who believe in a creator? Of course I do. But I also don't think my buying in or not should have any bearing on your spiritual salvation, belief system or the deity of your choice. And you shouldn't worry about me. I'll be fine.

Why do I bring this topic up? I was having coffee with two of my more god fearing friends the other morning and they both agreed that they would never practice yoga or feel comfortable with their children doing so. When I asked why they both seemed to be of the mind that it led to chanting and all sorts of eastern religious precepts that would be at odds with their christian world view. Don't want to open the door to that sort of stuff.

Having practiced Iyengar yoga from a very young age, I told them that I had never felt pushed into any "eastern philosophy" beyond the standard namaste greeting. But it launched us into a discussion, because I mentioned that many of my christian friends believe that we humans are engaged in a big exercise they call "spiritual warfare." My god is tougher than your god, god versus the devil, saints versus sinners, etc. They signaled that they also subscribed to this philosophy. Maintain vigilance, keep the devil from the door. 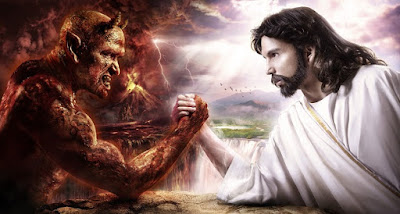 People are obviously free to have any belief system they choose, although most follow the creed of their parents. We are lucky that we don't live in the Islamic world where in many places one can be executed for leaving the faith.

I will never forget the Stanford ethics professor's words to me that if hell didn't exist we would have to invent it in order to keep people from eating each other. He might be right.

Threats of eternal damnation can certainly keep the troops in line. But I have to wonder about people's faith if it is so weak that it can be co-opted by a mere yoga stretch? Seems strange to me. Not to sound too snarky but my atheism seems far more secure. And I can consider and even adapt the validity of foreign concepts without worrying that they will break a brittle theology and world view.

Both of my friends are very well educated, far more than I. One had worked in a mental health ward at one time. He wanted to know why multiple loonie patients all reported seeing green demons on the ceiling if they didn't actually exist?

My only thought was that people see Jesus and the Virgin Mary's image in tortillas and clouds every day, does that mean they are real too? Or do we tend to hallucinate these things through our shared collective cultural vernacular and lexicon of experiences? Might the Hindu gaze upon the same apparition and see Kali or Durga? Or do you, like me, see mere burnt flour?

I am a bit of a seeker, have studied many of the major religions in depth, in order to better understand our universe and try to figure out what makes my fellow man tick. I actually think that the abrahamic religions have more of the competitive, dualistic, warfare vibe than the buddhist tenets but I could be wrong about that. Buddhists are also capable of heinous practices (see Rohingya), as are Jews, Muslims, Christians, Zoroastrians, Scientologists, Sikhs, Mormons, what have you. If it walks on two legs, watch your back, no matter what it professes to believe.

I asked my friends if they believed in the concept of original sin and at least one of them said that he did. That's another thing I can't buy. Sweet little baby, but according to some, full of sin until they get baptized. Seems weird to me. Concocted. Oh well, what do I know?

Nothing. And I prefer to keep it that way.
Posted by Blue Heron at 2:26 PM

Actually,you have inherited most of your spiritual beliefs from your parents. When I asked dad why he didn't teach me Hebrew,he replied "Because I am not superstitious." That has stayed with me ever since.

More evidence of the god gene that we all seem to have be born with. Well reasoned.