Excellent cut by the British band, The Birds, a London based band who formed in 1964 playing heavily R & B influenced music. 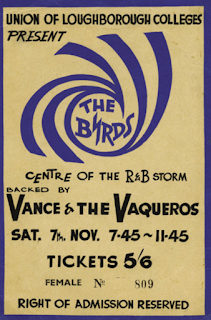 They employed one young Ronnie Wood on guitar. Ron is singing the vocals on this cut, their second single, released in 1965. The song itself is a Holland Dozier Holland number.

Later they got in a contract name squabble with the better known American group, the Byrds, which failed. I have never been a huge Ron Wood fan but he sounds great here.
Posted by Blue Heron at 4:03 PM