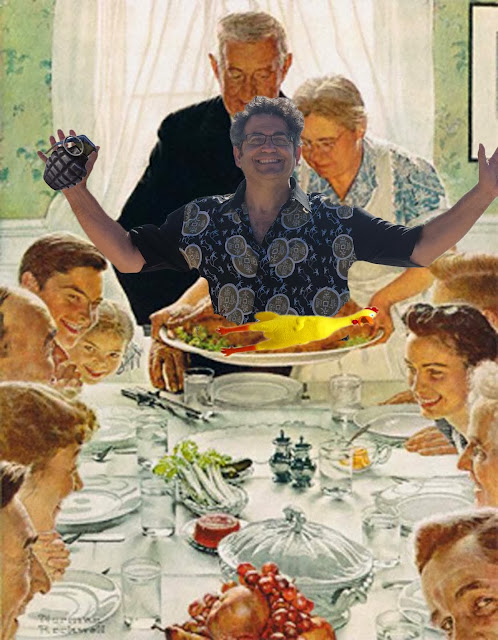 Been a tough week and a tough year.

Often broke, too frequently sick and occasionally near despondent, I'm not quite sure how I pulled through these last twelve months.

But I did. Still rocking, the rumors of my demise obviously greatly exaggerated. Hero comes back and kills it in the third act.

It wasn't easy. As I have stated often this year, surviving on a wing and a prayer and a big dose of charity.

There were many times I didn't think I could even go on. Couldn't figure out a way out of the morass.

I will never forget those of you that were there for me, both emotionally and financially.

And I managed to seize some opportunities and finally turn things around. Caught a long missed tail wind. Many thanks. I have an enormous feeling of gratitude.

This past week was rough. Lots of low back and leg pain, like I had after the first bladder surgery. When I had the severe urinary infection.

Couple that with fatigue, nausea, dizzyness and a general malaise and you get an idea of how I am feeling. Pretty unbearable. Had a massage, visited the chiropractor, took some anti inflammatory pills and muscle relaxers, nothing helps.  Some strange heart aberrations too.

I went down to my immunotherapy session in Hillcrest today and they took a urine test. Turns out I have a pretty nasty urinary infection again. She gave me a shot, put me back on cipro and said we couldn't proceed with the treatment, the antibiotics would negate the possible benefits of the bcg. Will have to wait another week to resume.

I have to wonder if the infection is wreaking havoc on my muscular skeletal system as well, since I had the same symptoms the last infection? I have been taking a bunch of magnesium citrate, which usually helps put me in balance but no relief this time.

The doctor also asked me how I was handling the dosages of the immunotherapy drug she was giving me which leads me to believe that I am getting a much higher dose than I received thirty years ago. Because it never before kicked my ass like this.

Will be quite happy when I finally put this cancer business behind me.  I am thinking positive, the universe and I have some serious plans in the works. Stay tuned...

Shelly told me about Maca root, after she was told she had elevated blood pressure and yadda-yadda...she said fuckit, I'll just get back on Maca again...next visit everything was normal...said Maca was a trend a while back here, but it is a staple in Peru...check it out.

I have been thinking that you might be getting bigger doses of the BCG as you have a nastier tumor this time. Also the natural immune system fades with time so that could be a factor in adjusting the BCG dose. One thing for sure, this all sucks.

Robert, No pity party. Be a strong mfer.