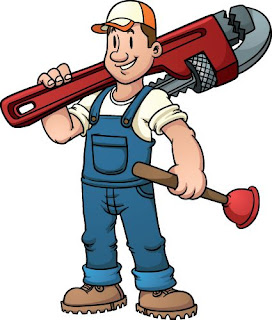 As I get older I am everyday made more and more aware of my genetic dispositions and deficiencies. As I may have let on previously, I am a jewish man. People of my tribe have some readily evident and easily identifiable limitations which as far as I know are inherent across the whole endogamous tribe.

We don't do NASCAR or college football, lack the requisite gene. And I'm not real good at fixing stuff, in fact I suck. No facility whatsoever. I could no more replace my own brakes or fix my furnace than I could fly to the moon. I am as adept in discussing the finer points of a Chevy 350 small block engine as I am speaking Swahili.

So when the sink stopped up the other day in the kitchen it sent chills up my spine. The scene went something like this:

She: Honey, the sink is stopped up.

Me: Damn, why don't you call a plumber?

I started feeling pangs of frustration, the personal emasculation at not being Mr. Fixit lurking right under my epidermoid layer and welling up like a fugue. The truth is I hate plumbing worse than anything. I remember a plumbing disaster in Rainbow years ago where I started out with a small copper leak and ended up with nine copper leaks. But my pride and the exigency of the situation would once again force me to meet my failure as a husband and hominid tool user head on.

I called Bill and he offered me to loan him one of his snakes, he had a 25' and a 50'. I took the latter, can never have enough, right? I took everything out from underneath the sink and the game was on. I removed both the gooseneck and the separate clean out and plunged the coiled end of the snake in and hit the dreaded wall of defeat about four feet in.

"I give up," I pronounced. "Call a plumber." Leslie was cool, patted me on the back and thanked me for trying. The whole incident sort of reminded me of a bad erectile dysfunction ad. The truth is I was way out of my pay grade and doomed to failure but I had to give it a go so as not to feel like a worthless lout.

I called my buddy Barry on the way in to town today. I had to meet my painting restorer at my shop, get a few canvasses ready for Wednesday. Barry is of course, the old comedy writer and another member of the tribe and he genuinely sympathized with the latest recount of my shortcomings.

He said that there were only two things he was ever halfway good at doing and that was having sex and telling a joke. He says that when he gets a flat tire he makes a wisecrack and if it doesn't laugh he tries to f*ck it. Then he calls triple AAA.

Barry offered that our whole conversation reminded him of a brilliant business idea he had come up with long ago, specially tailored for those in my exact ethnic conundrum. He would give me this one for free, to run with:

There have to be thousands of jewish households across the land that suffer from the same malady and struggles. Call the eight hundred number and if your tsuris hasn't stopped in 24 hours you get your money back. Happy wife, happy life. I can sell paintings, the plumber can fix pipes. Everybody is happy.

It is so freaking brilliant. I have some very smart friends.
Posted by Blue Heron at 2:17 PM

Haa, haa, haa...remember the two of us in a comedy of errors under that same sink 25-30 years ago! Come to think of it, maybe this story and the previous "memory" story run together...I think we ended up with eight leaks more than we started with! But it was definately your Fallbrook house. Obviously, Les' memory is slipping too...or she just needed a laugh!

My husband was one of the tribe. He was similarly worthless around the house, but in a strange anomaly, liked to watch car races on TV. He dove for shit mind you (I even drove us to the hospital to have our son), and couldn't even pump his own gas. He was a writer, in keeping with the millennia of scribes of the tribes. ~ D.O.

Just pour a gallon of aqua regia down the pipe. It will clear the clog and continue on its way until you have a new septic drainfield that open up in Peking.